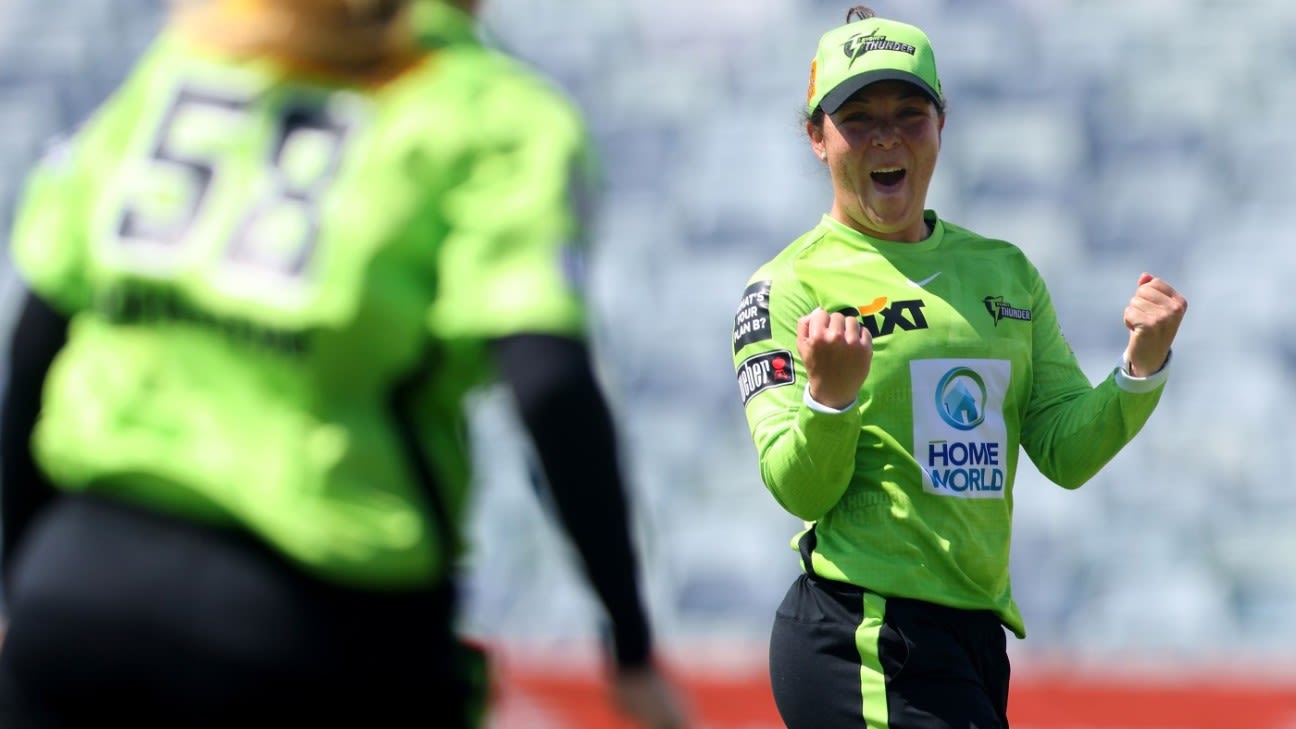 Sydney Thunder 166 for 4 (Beaumont 77*) beat Perth Scorchers 141 for 9 (Kapp 32, Smith 5-17) by 25 runs
Lauren Smith took a career-best 5 for 17 while Tammy Beaumont starred with the bat as Sydney Thunder belatedly kick-started their WBBL campaign in style with a surprise win over the unbeaten Perth Scorchers at the WACA.
The Scorchers had few answers with the bat, eventually reaching 141 for 9 to fall 25 runs shy of their opponents as the holders slipped to a rare home defeat.
Smith helped turn the screws with 3 for 13 from three overs before returning 5 for 17 from her four allotted overs.
The Thunder set up a first win of the season in their fourth outing with an imposing 166 for 4 from their 20 overs.
Opener Beaumont cast aside a string of low scores to hit an unbeaten 77 off 59 balls for the Thunder’s biggest tally of the season.
Thunder star Rachael Haynes looked in good form before her 24-ball innings came to an end on 28.
Alana King took the prized wicket of Haynes, but it was an otherwise rare off day for the international legspinner who went for 22 from her two overs.
Holly Ferling debuted in Scorchers colours and soon had the scalp of Amy Jones, eventually returning 1 for 25 from three overs.
In reply, the home side started strongly with 25 off the first three overs before Sophie Devine was dismissed for 12.
And the Scorchers’ hopes took a nosedive as Olivia Porter scooped up a fine sprawling catch to get rid of run machine Beth Mooney.
It was a second catch in a matter of minutes for the youngster who earlier chipped in with a handy unbeaten 17 off only six deliveries in just her second outing.
Mooney’s dismissal marked the beginning of the end for the high-flying Scorchers who soon slipped to 48 for 5 at the midway point of the innings and facing a near impossible required run-rate they never recovered with Smith running through them.
Tags: Lauren Smith, Perth Scorchers, Sydney Thunder, Tammy Beaumont, Thunder Wmn vs Scorchers, WBBL