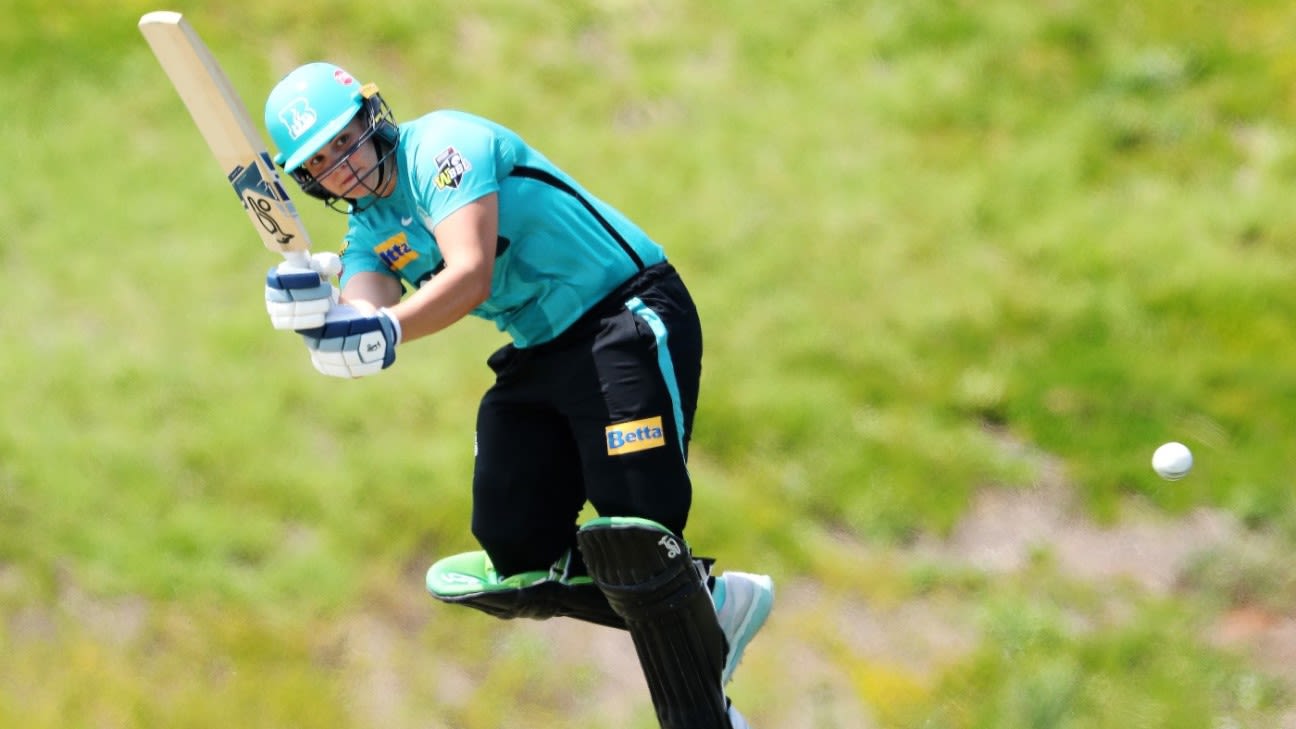 Brisbane Heat 8 for 163 (Voll 52) beat Melbourne Renegades 137 (Webb 47, Dooley 40, A Kerr 3-26) by 26 runs
Georgia Voll whips off her toes•Getty Images
Brisbane Heat’s batting depth has come to the fore with a match-defining half-century by Georgia Voll securing a 26-run win over the Melbourne Renegades in the WBBL.
Heat posted 8 for 163 and dismissed the Renegades for 137 at Adelaide’s Karen Rolton Oval. It was the Heat’s second win in three days over the same opposition after prevailing in Mackay on Tuesday.
Heat slumped to 3 for 31 at the end of the sixth over before Voll (52 off 37 balls) and Amelia Kerr (27 off 22) conjured a rescue mission to get their side back in the game.
Voll’s innings was a masterclass of placement and common sense in a knock that included nine boundaries. She stayed until the 19th over to hold the innings together with late cameos from Jess Jonassen and Pooja Vastrakar giving the Heat bowlers a total to defend.
Renegades’ innings was a carbon copy of Heat’s at the start as they crashed to 3 for 15 in the fifth over.
Josephine Dooley (40 off 28) gave the Renegades a sniff but the turning point came when she holed out to the first ball of the 11th over. Two balls later Heat medium pacer Courtney Grace Sippel dismissed Georgia Prestwidge without scoring.
Melbourne needed 99 from the last nine overs and a whirlwind hand by Ellie Falconer (27 off 11) gave her side a chance before she chopped on to Kerr. Courtney Webb ran out of partners when the last wicket fell at the end of the 19th over.
Heat’s bowlers performed well as a unit with legspinner Kerr (3 for 26) and offspinner Charli Knott (3 for 19) chiming in with key wickets to swing the momentum their team’s way.
Renegades announced on Friday that they had signed Sri Lanka captain Chamari Athapaththu for the remainder of the season.
The 32-year-old will join the squad following Monday’s match against the Adelaide Strikers, and she replaces Indian skipper Harmanpreet Kaur, who was ruled out for the season with a back injury.
Meanwhile, the dates for the WBBL finals have been confirmed, with all three matches to take place between November 23-26.
The Eliminator (3rd v 4th) is on November 23, with The Challenger (2nd v The Eliminator winner) to be held a day later.
The November 26 final is on the same day as the Socceroos’ World Cup clash with Tunisia, and also the Victoria State election.
Tags: Brisbane Heat, Georgia Voll, Heat Wmn vs Renegades Wm, Josephine Dooley, Melbourne Renegades, WBBL