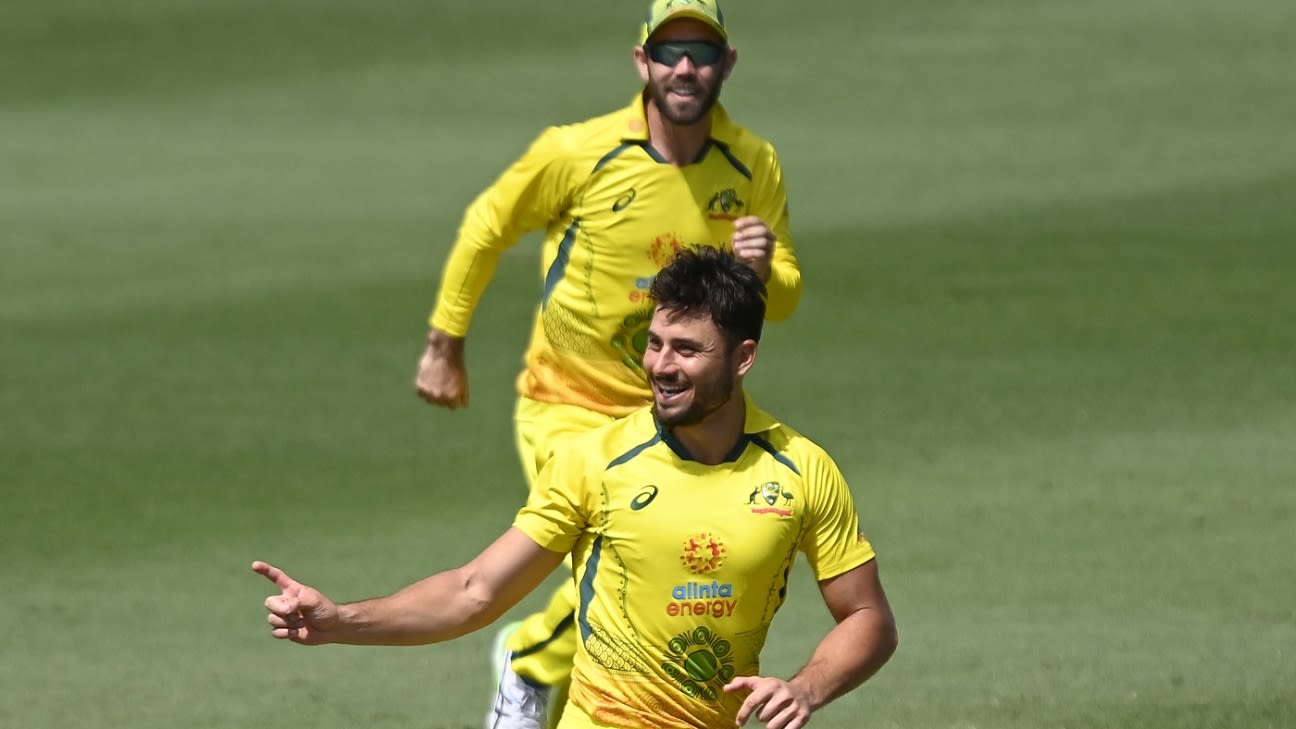 Under pressure Marcus Stoinis has declared himself fit and ready for Australia’s opening T20I against England in Perth with the allrounder adamant Cameron Green’s ascension is not proving a distraction.
Stoinis on Thursday was recalled to Australia’s squad to play in the three-match series against England, while spin-bowling allrounder Ashton Agar has also returned from injury ahead of the T20 World Cup.
Stoinis was a hero in Australia’s against-the-odds triumph at last year’s T20 World Cup in the UAE, proving particularly effective as a finisher alongside Matthew Wade, but has struggled to recapture those heights.
Related
A side strain forced Stoinis to miss Australia’s tour of India and ongoing series against the West Indies in Queensland. While the rise of allrounder Green has further put pressure on Stoinis, who is in Australia’s 15-player T20 World Cup squad while his West Australian team-mate can only be a late inclusion through injury.
With selectors having backed him in, Stoinis’ fitness is set to be put to the test against England at Optus Stadium in the return of international cricket in Perth since the Covid-19 pandemic.
“I had a good solid bowl yesterday. Our physio Nick Jones is over here as well so they ticked all that off and had a good look,” said Stoinis who confirmed he would bowl if selected against England. “I reckon I could have played [against West Indies]. But it wasn’t worth it because of the travel over there.”
Marcus Stoinis will be available to bowl against England•Getty Images
As Australia continue to strive to find the right balance ahead of their title defence on home soil, there has been much debate over whether Stoinis deserved his spot in the T20 World Cup squad over emerging Green who is all but certain to miss the tournament having not been selected in the original squad.
Stoinis, however, said he was unaffected by the situation and hoped 23-year-old Green could be somehow be added to the squad.
“Cameron Green is like our little brother,” he said. “I’ve played club cricket with him. We are proud of him and he’s got such a good future. He’s actually good right now. We’re happy for him.”
Similarly to 12 months ago, Stoinis was preparing to replicate his role as a hard-hitting middle-order batter who could also bowl handy overs with his seam bowling.
“We’ve definitely got a brand…the allrounders need to bowl and get a few overs in similar to the last [T20] World Cup where it was me or Mitch [Marsh] bowling,” he said. “And, yeah, batting in the middle overs, so I don’t think many things will change.”
Agar also confirmed his availability after being sidelined with a side strain suffered during Australia’s ODI series against Zimbabwe last month.
“I’m feeling pretty good. It’s always hard coming back to batting and bowling and just getting the confidence back in your body,” he said. “I’m just trying to string a few good sessions together at the moment and get the confidence back.”
Meanwhile, Steven Smith said he was told that the requirement for an extra bowler in the absence of Stoinis and Marsh playing as a just a batter was why he was left out of the opening match against West Indies.
“Whether that is going to be the same going forward I am not really sure,” he said. “I am pretty relaxed and feel like I am hitting the ball quite nicely at the moment so … I am chilled.”
Marsh has flown to Perth early so won’t play in Brisbane which could open the door for Smith to return and he still believed he had the skillset to be valuable in the team.
“I am obviously not as strong and powerful as some of the other guys but some wickets entail just good smarts and punching the ball and timing the ball really well, particularly in Australia where we have big grounds.”
Tags: Ashton Agar, Australia, Cameron Green, England in Australia, ICC Men's T20 World Cup, Marcus Stoinis