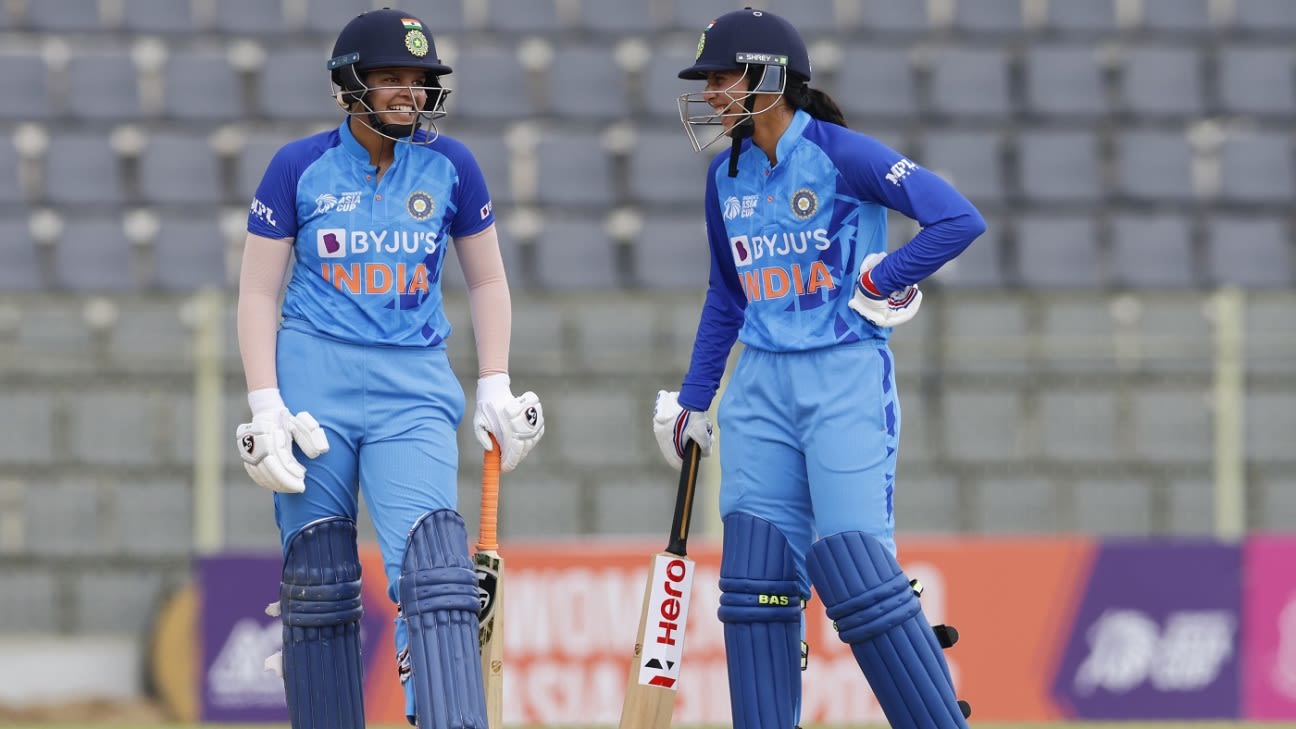 India 159 for 5 (Shafali 55, Mandhana 47, Rodrigues 35, Rumana 3-27) beat Bangladesh 100 for 7 (Sultana 36, Fargana 30, Shafali 2-10, Deepti 2-13) by 59 runs
A superb batting display from openers Shafali Verma – who also picked up two wickets – and Smriti Mandhana helped India bounce back from a loss to Pakistan to secure a 59-run win against Bangladesh in Sylhet. With this win, India also put one foot into the semi-final of the Women’s Asia Cup.
Mandhana and Shafali put up a 96-run first-wicket stand in 12 overs, following which Bangladesh fought to pull back things a bit. But Jemimah Rodrigues stepped in and made sure India did not lose the momentum, bringing up an unbeaten 24-ball 35 to take India to 159 for 5. Bangladesh were never in the chase from the outset, as they dawdled to 48 for 1 after 10 overs against India’s disciplined bowling, ending up with 100 for 7 in their 20 overs.
Mandhana, Shafali lead the way
With Harmanpreet Kaur out with a niggle, Mandhana had said at the toss that they were targeting a total of 140-plus, and she looked set to achieve that from the get-go. With Shafali by her side, she started aggressively, coming down the track to hit Fariha Trisna and Salma Khatun for boundaries. Shafali then took over, slamming a six and two fours off Trisna’s second over. The duo feasted on Nahida Akhter’s left-arm spin in the sixth over, taking her for 17 runs, which included four fours. India’s score at the end of the powerplay stood at 59, the highest in this tournament so far.
The duo used their feet adeptly, often trekking out of their ground to work balls into gaps. Bangladesh struggled to create chances as they let the stand go past 91 in the 10th over. But they finally found some relief – with the partnership just four short of touching 100, a mix-up resulted in Mandhana’s run-out for 47 at the non-striker’s end.
It was a much-needed fifty for Shafali. She had scored a 39-ball 46 against Malaysia earlier this week following a slew of low scores. Her last T20I half-century had come in March 2021, against South Africa in Lucknow. She did not make the XI in the match against Pakistan, though she kept gloves while wicketkeeper Richa Ghosh was off the field due to a heat-related issue. With the Bangladesh bowlers bowling too straight, she targeted her favoured leg side and looked effortless doing that, as she brought up her half-century off 40 balls – her first fifty in 20 T20Is. Her innings came to an end in the very next over, when she missed a reverse sweep off Rumana Ahmed and was bowled.
Rumana jolts India, but Rodrigues continues fine form
Rumana came back in the 17th over and dealt India further blows. With the run rate already having dropped after Mandhana’s dismissal, Rumana struck back-to-back in the last two deliveries of the over to remove Ghosh and Kiran Navgire to get her tournament tally to eight wickets. But in the very next over, Rodrigues struck two boundaries to ease the pressure. Rumana missed her hat-trick opportunity when she came on to bowl the 19th over and dropped a caught-and-bowled chance off Rodrigues. The batter then went on to slog-sweep Rumana for a four a couple of balls later while Deepti Sharma helped amp up the run rate with a six over long-on. Rodrigues had helped push India’s total to an above-par 159 for 5.
Bangladesh stumble in chase
Bangladesh had to go at eight an over to chase the total down. But a superb effort by the India bowlers in the powerplay meant the openers couldn’t attack as much as they would have liked. Sneh Rana drew first blood, breaking the 45-run opening stand, following which Bangladesh captain Nigar Sultana, who was coming off a 34-ball 53 in the match against Malaysia, joined Fargana Hoque at the crease in the 10th over, with the required run rate having zoomed above 10.
With Fargana struggling at one end, Sultana made sure she compensated by showing intent to attack. She went after left-arm spinner Rajeshwari Gayakwad, scoring two boundaries off her in the 12th over. But wickets kept falling at the other end, with Deepti removing Fargana for a 40-ball 30 and Rumana departing for a duck after a run-out.
Sultana continued to find the gaps occasionally but found no support, with Bangladesh needing 69 off 12 balls. She was one of the victims of Shafali’s double-strike in the 19th over, falling for a 29-ball 36. Bangladesh huffed and puffed to 100 for 7 as they went down by 59 runs.
Tags: Bangladesh, Bangladesh Women, IND Women vs Bdesh Wmn, India, India Women, Women's Asia Cup