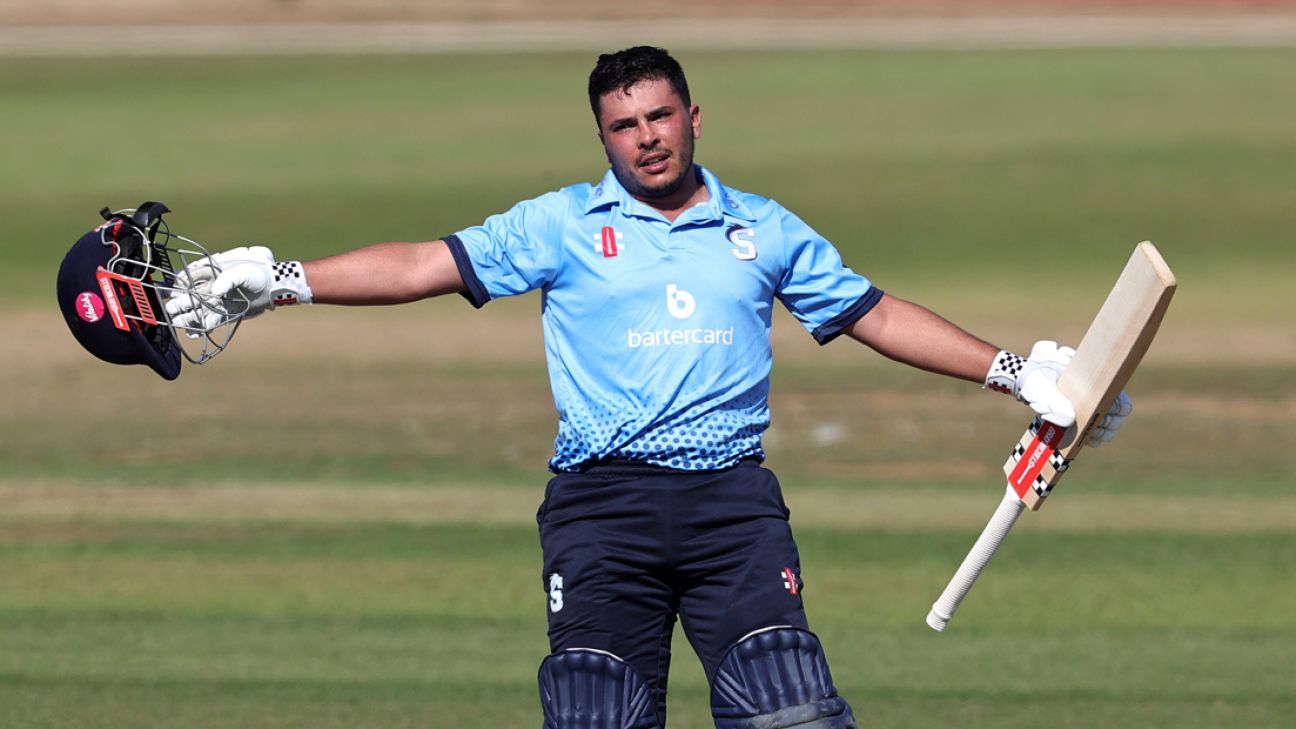 Northamptonshire 225 for 4 ( Vasconcelos 104, Gay 81, Carlson 4-41) beat Glamorgan 221 (Lloyd 65, Zaib 4-23) by six wickets
Northamptonshire’s Ricardo Vasconcelos struck a superb run-a-ball 104, his second List A century, as Northamptonshire beat Glamorgan by six wickets in this Royal London Cup clash at Wantage Road.
Vasconcelos put a bad spell of form firmly behind him as he rediscovered his touch, taking 17 boundaries off the Glamorgan attack. He combined with Emilo Gay (81) in a matchwinning 188-run first wicket partnership to help Northamptonshire chase down 222 to win with an emphatic 85 balls to spare.
He admitted that taking over the captaincy shortly before the start of the season had been tough.
“It’s been a long season; it’s been tough for me personally,” he said. “But I knew I had the full backing of the changing room and the coaches and it was going to come eventually and thankfully it came today and hopefully there’s still time in the season to make it a good one, so hopefully I can kick on.
“I still felt like I was batting fairly well. I’d say it was more mental. I had a bit of a tough time of it with the whole captaincy thing and stuff like that. I just wasn’t enjoying playing cricket as much. But luckily now, I’ve come back refreshed and hopefully, more runs will continue to flow.
Related
Even though Glamorgan skipper Kiran Carlson took four quick wickets for just six runs in the space of 15 deliveries towards the end, there was to be no repeat of Northamptonshire’s wobble against Hampshire earlier in the week as Rob Keogh bludgeoned the winning runs.
Earlier, Saif Zaib returned career best List A bowling figures as he ripped out Glamorgan’s middle order with four wickets. Extracting plenty of turn, Zaib arrested a Glamorgan middle order fightback led by David Lloyd (65) after a top order collapse to the seamers had them reeling at 22 for four inside six overs.
Zaib broke the momentum created by Lloyd and Joe Cooke’s 94 run stand, removing both set batters in his first two overs and finishing with miserly figures of four for 23 as Glamorgan eventually folded for 221 with 15 balls remaining.
The early carnage in Glamorgan’s innings was led by Nathan Buck who claimed two wickets in an over and Ben Sanderson who also claimed two scalps. Sanderson got the first breakthrough, picking up the dangerous Sam Northeast who was adjudged to have inside edged the ball behind. Keeper Lewis McManus took an excellent diving catch down the legside.
In the next over Buck found some movement to hit the top of Colin Ingram’s off-stump and had a second when Carlson drove loosely outside off-stump and was caught behind by McManus. Sanderson then trapped Billy Root on the crease lbw.
Lloyd started to counterattack, taking consecutive boundaries off James Sales, upper cutting and then whipping through midwicket. He took on the spinners too, smacking Freddie Heldreich through midwicket and bringing up his half-century off 55 balls when he swept Alex Russell for his eighth boundary.
Zaib, though, stemmed the flow of runs, picking up Lloyd with only his second delivery when he offered a low caught and bowled chance. Cooke (39), who had driven and swept sweetly against the spinners, was then bowled through the gate by Zaib to leave Glamorgan on 125 for six.
Andrew Salter (20) became Zaib’s third victim when he was trapped in front playing an attempted sweep. The slow left-armer had his fourth when he got one to turn past the edge of Tom Cullen’s bat only for McManus to complete the stumping.
Sales bowled James Weighell but Dan Douthwaite (30 not out) had some fun, hitting four boundaries before Sanderson wrapped up the innings with his third wicket (three for 17) when he removed James Harris.
In the chase, Gay stroked the ball fluently around the park, driving effortlessly and taking on the short ball. He offered one chance early when he drilled back to Salter on 29 but the bowler could not hold on. Otherwise, he appeared untroubled, making his way to his second List A half century off 48 balls.
Vasconcelos played and missed early but was soon finding the boundary. He drove sweetly and unfurled some aggressive shots against both the seamers and slow bowlers before sweeping Ingram for four to reach his half century from 58 deliveries.
The pair brought up the 100 stand in the 18th over and continued to play their shots, both coming down the pitch to Salter and whipping him over midwicket to the boundary.
Carlson broke the stand after 29.1 overs when he had Gay caught at backward square off the top edge and then quickly picked up Young caught down the leg-side by keeper Cullen. Vasconcelos fell lbw to an attempted sweep shortly afterwards, followed by Zaib who chipped straight to mid-off.
With so much time remaining, Keogh and Lewis McManus kept their calm and eased their side home.
Tags: Glamorgan, Glamorgan vs Northants, Northamptonshire, Ricardo Vasconcelos, Royal London One-Day Cup