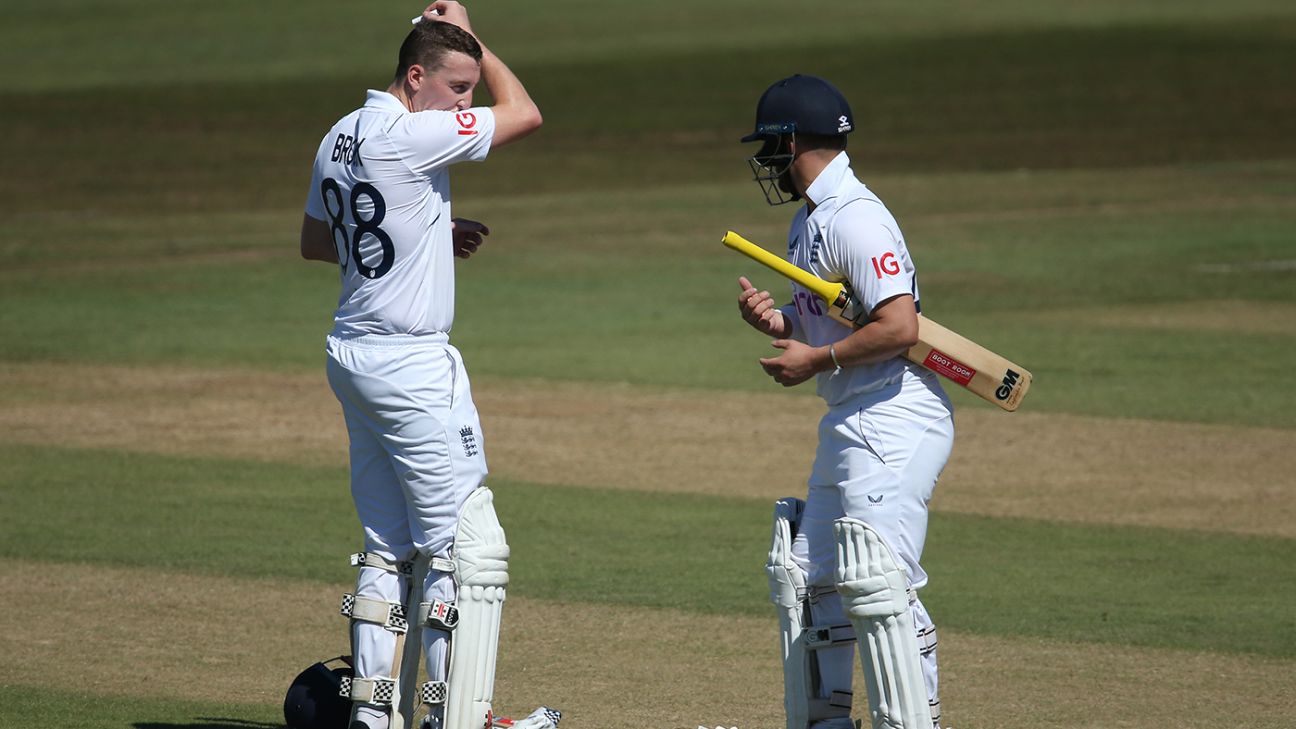 South Africans 433 and 59 for 3 (Markram 20*, van der Dussen 8*) trail England Lions 672 (Duckett 145, Brook 140, Billings 92, Markram 6-91) by 180 runs
Harry Brook extended his run as the most in-form batter outside of England’s regular Test XI with an aggressive century against the South Africans to put the Lions in the lead after three days of the tour match in Canterbury. Brook, Ben Duckett, who top-scored with 145, and Sam Billings, who made a 96-ball 92, played their own version of Bazball against an attack made up mostly of South Africa’s reserve Test bowlers, none of whom have done enough to usurp the incumbents.
Duanne Olivier was the most successful seamer, and took 2 for 59, Marco Jansen bowled almost double the number of overs as Olivier and finished with 1 for 111 but Glenton Stuurman and Lutho Sipamla went wicketless. Keshav Maharaj, who is usually miserly, conceded at a rate of 7.68 to the over, and it was the part-time bowling of Aiden Markram that enjoyed the best rewards. Markram’s wickets came as the Lions batters lost concentration on a day after which the South Africans may be glad this match does not have first-class status.
Brook resumed on 64, with a licence to play freely. He was fed deliveries that were too straight from the seamers and picked them off his pads and was particularly severe against Maharaj. His strong use of wrists and feet, and intent in advancing down the track to hit Maharaj over the top, would have given South Africa’s first-choice spinner plenty to ponder ahead of the Test series.
Duckett is not in the squad but bettered Brook’s score by five runs and the pair shared in a 191-run fourth-wicket stand which was broken when Markram accepted a return catch off Brook. It didn’t give the South Africans much reprieve as Duckett and Billings went on to put on 151 for the fifth-wicket and took the Lions into the lead and over 500. Markram ended their stand too and worked his way through the lower order as the Lions were eventually bowled out for 672, 239 runs ahead and with 25 overs left in the day’s play.
The visitors, perhaps feeling the heat from 117 overs in the field on a day where temperatures touched 30 degrees, did not respond as a Test line-up would want to. They were loose outside the off stump and careless in their shot-selection.
Ollie Robinson, a candidate to play in the second Test in Manchester, bowled South Africa Test captain Dean Elgar with his second delivery. Elgar misread the line and shouldered arms. Four overs later, he removed Elgar’s opening partner Sarel Erwee, who was caught behind. Both Elgar and Erwee scored some runs in the first innings, where they shared an opening stand of 85, but Keegan Petersen, who was lbw cheaply to Craig Overton in the first innings, went the same way in the second. He has scored just 21 runs in the tour match.
Markram, who may be batting for a middle-order spot in the starting XI, and Rassie van der Dussen took the South Africans to the close. They will eye the fourth and last day as crucial to their chances of playing in the Test, with both coming off periods of poor red-ball form.
Tags: Ben Duckett, England, Harry Brook, South Africa, South Africa in England, Sth Africans vs Eng Lions