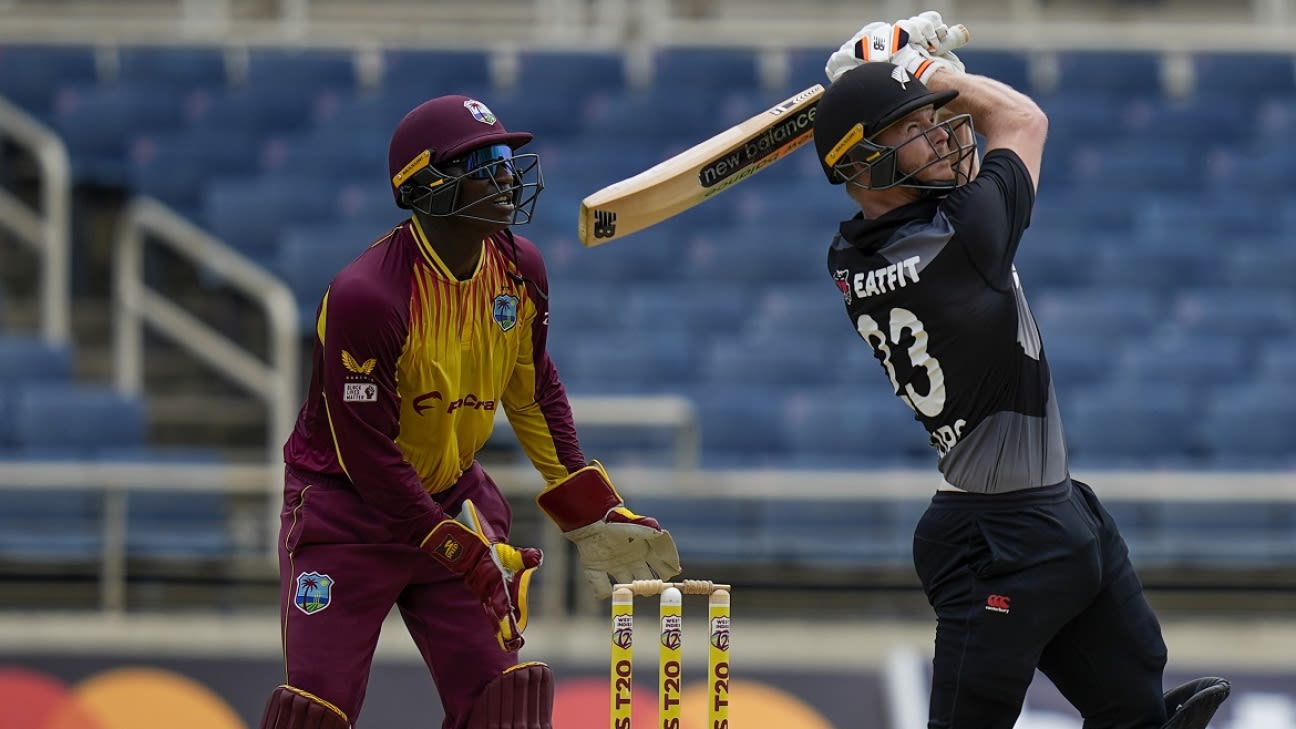 New Zealand 215 for 5 (Phillips 76, Mitchell 48, Conway 42, McCoy 3-40) beat West Indies 125 for 9 (Bracewell 3-15, Santner 3-15) by 90 runs
Glenn Phillips struck a half century from 31 balls to propel New Zealand to a 90-run win over the West Indies in the second T20I in Jamaica, clinching the three-match series with a 2-0 lead.
After reaching his fifth T20I half century, Phillips went on to 76 from 40 balls and led New Zealand to 215 for 5, exceeding the 185 for 5 that was a winning total in the first match of the series. His innings included six sixes and four fours.
West Indies managed only 125 for 9 in reply, lacking the partnerships that underpinned a New Zealand total which was the highest by a visiting team against the West Indies in a T20I in the Caribbean.
Phillips put on 71 for the third wicket with Devon Conway who made 42 from 34 balls and 83 with Daryl Mitchell who made 48 from 20, the latter partnership coming off just 34 balls. In all, New Zealand scored 130 off their second 10 overs.
West Indies’ best were stands of 35 for the seventh wicket between Romario Shepherd and Rovman Powell which began when the home team was 40 for 6 and the match already lost. Hayden Walsh and Obed McCoy put on 38 in an unbroken stand for the last wicket.
Phillips put to good use his knowledge of conditions at Sabina Park, which is his home ground in the Caribbean Premier League.
“Coming back to Sabina Park is amazing. I’ve got great memories here,” Phillips said in a television interview. “Being able to get a 50 for my country over here in front of a crowd which I really love is definitely very special for me.
“Credit to the West Indies for the way they bowled up front with the new ball which was really, really good in terms of taking the pace off the ball when it was new and harder. As it got older the pitch became a bit nicer to bat on.”
Seven West Indies wickets fell to spin bowlers, including the first four of the innings.
Mitchell Santner, who was Player of the Match for his 3 for 19 in the first game, took a wicket with his first ball and two wickets in his opening over to set back West Indies’ run chase.
Offspinner Michael Bracewell, who replaced fast bowler Lockie Ferguson in the New Zealand line-up, also took a wicket with his first delivery, dismissing captain Nicholas Pooran as West Indies slumped to 12 for 3 at the start of the fourth over.
Santner and Bracewell both finished with 3 for 15. Tim Southee took the only wicket which fell to a fast bowler, removing Odean Smith at the tail.
Shimron Hetmeyer was the first batter not to fall to a spin bowler, run out by a direct hit at the bowler’s end by New Zealand captain Kane Williamson. West Indies were 28 for 5 at that point and couldn’t recover.
“We just didn’t show up today,” Pooran said. “They batted us out of it and we couldn’t see our way with the bat. We had to stay in the game. It just didn’t start well for us. We are struggling but the more cricket we play our performance will grow.”
The final T20I will be played on Sunday at the same venue, followed by three ODIs
Tags: Daryl Mitchell, Glenn Phillips, Michael Bracewell, Mitchell Santner, New Zealand, New Zealand tour of West Indies, West Indies, West Indies vs New Zealand