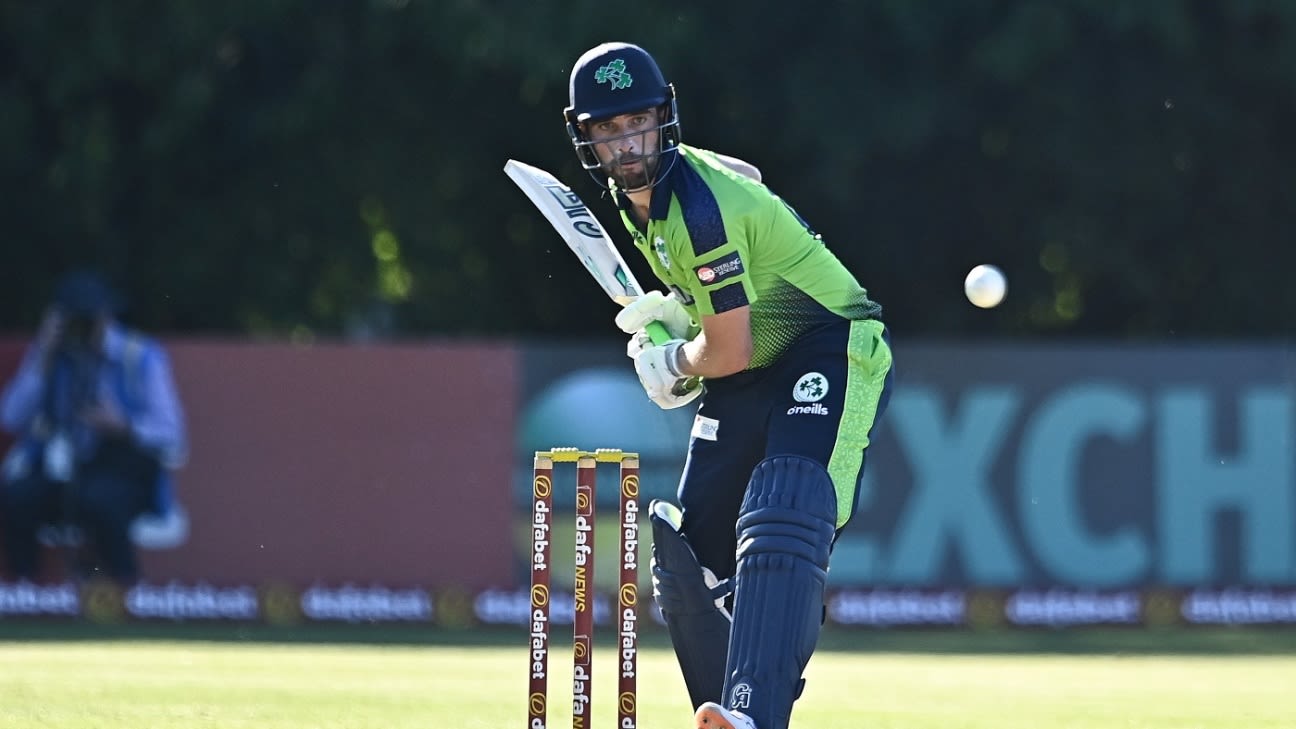 Ireland 125 for 5 (Balbirnie 46, Tucker 27, Nabi 2-15) beat Afghanistan 122 for 8 (Shahidi 36, Ibrahim 17, Adair 2-12, Campher 2-13) by five wickets
Josh Little, Mark Adair, Curtis Campher and Gareth Delany picked up two wickets each before Andy Balbirnie’s 46 off 36 balls broke the back of a 123-run chase to give Ireland a five-wicket win in the second T20I in Belfast. The hosts now lead the five-match series 2-0.
Afghanistan opted to bat first for the second time in two games but their innings never really took off. Both openers – Rahmanullah Gurbaz and Usman Ghani – were back in the pavilion by the third over. At the end of ten overs, they were hobbling at 62 for 4. The second half of the innings was no different and they finished with 122 for 8. Extras, with 19, were the second-highest contributor.
Afghanistan needed early wickets to put Ireland under pressure but Balbirnie ensured that didn’t happen. The target was never going to challenge Ireland, and Afghanistan’s sloppy fielding made their task even easier. That meant despite a late wobble, they won with an over to spare.
For the first time in his T20I career, Rashid Khan went wicketless in back-to-back games. After none for 25 in the first T20I, he ended with none for 27 from his four overs today.
Ireland seamers dent Afghanistan in the powerplay
On what Mohammad Nabi described as a dry pitch at the toss, the Ireland seamers found movement and as well as extra bounce with the new ball to pick up three wickets in the powerplay.
Adair struck with the first ball of the second over as Gurbaz sliced a full delivery to short third. In the next over, Little got one to jag back in to Ghani. The batter was looking for a cut but was cramped and ended up chopping the ball onto his stumps.
Ibrahim Zadran walked in at No. 4 and tried to up the scoring rate. He took on Barry McCarthy, hitting the seamer for three fours in his first over. In the next over, he steered Campher to the deep-third boundary for his fourth four in nine balls. However, a stunning catch from Andy McBrine cut short his counterattacking knock. Ibrahim tried to loft Curtis over wide long-on on the final ball of the powerplay but ended up miscuing it towards deep midwicket. McBrine sprinted in from the deep and put in a full-length dive to take the ball just above the ground, leaving Afghanistan 41 for 3 at the end of six overs.
Afghanistan fail to recover from early blows
Afghanistan needed a partnership to stabilise the innings; instead, they kept losing wickets at regular intervals. Najibullah Zadran started in his usual positive manner, reverse-sweeping McBrine for a four, but ended up uppercutting Campher straight to deep point soon after. Nabi didn’t last long either and holed out to long-on for 9 against Delany.
Hashmatullah Shahidi did occupy one end but struggled for timing throughout his 42-ball 36. Ironically, when he nailed a reverse sweep, it went straight into the hands of deep point. With Rashid failing to provide any fireworks, Afghanistan could manage only 22 from the last four overs.
Naveen-ul-Haq bowled Paul Stirling for four•Getty Images
Balbirnie leads Ireland’s chase
Ireland lost Paul Stirling early in their chase and were 8 for 1 after three overs, but Balbirnie struck four fours in the next 11 balls to calm the nerves. A couple of overs later, he swept Mujeeb Ur Rahman in front of square leg for the first six of the match.
Along with Lorcan Tucker, he added 65 off 54 balls for the second wicket; Tucker’s contribution was 19 off 20 balls. Mujeeb eventually broke that stand when Balbirnie attempted a fine sweep but the ball lobbed up off the back of the bat and Gurbaz pouched it.
A late wobble but Dockrell sees Ireland home
With 42 required from as many balls, Nabi brought himself on for the first time in the 14th over and made an immediate impact. In the space of four balls, he sent back Harry Tector and Tucker. But his second over, which featured four leg-byes, went for 13. That left Ireland with 20 needed from 24 balls. Fazalhaq Farooqi and Naveen gave away only 12 in the next two overs, with Farooqi also dismissing Campher. But George Dockrell kept his calm. On the final ball of the 19th over, bowled by Farooqi, he chipped a full toss over wide long-on to seal the game with a six.
Tags: Afghanistan, Afghanistan tour of Ireland, Andy Balbirnie, Ireland, Ireland vs Afghanistan