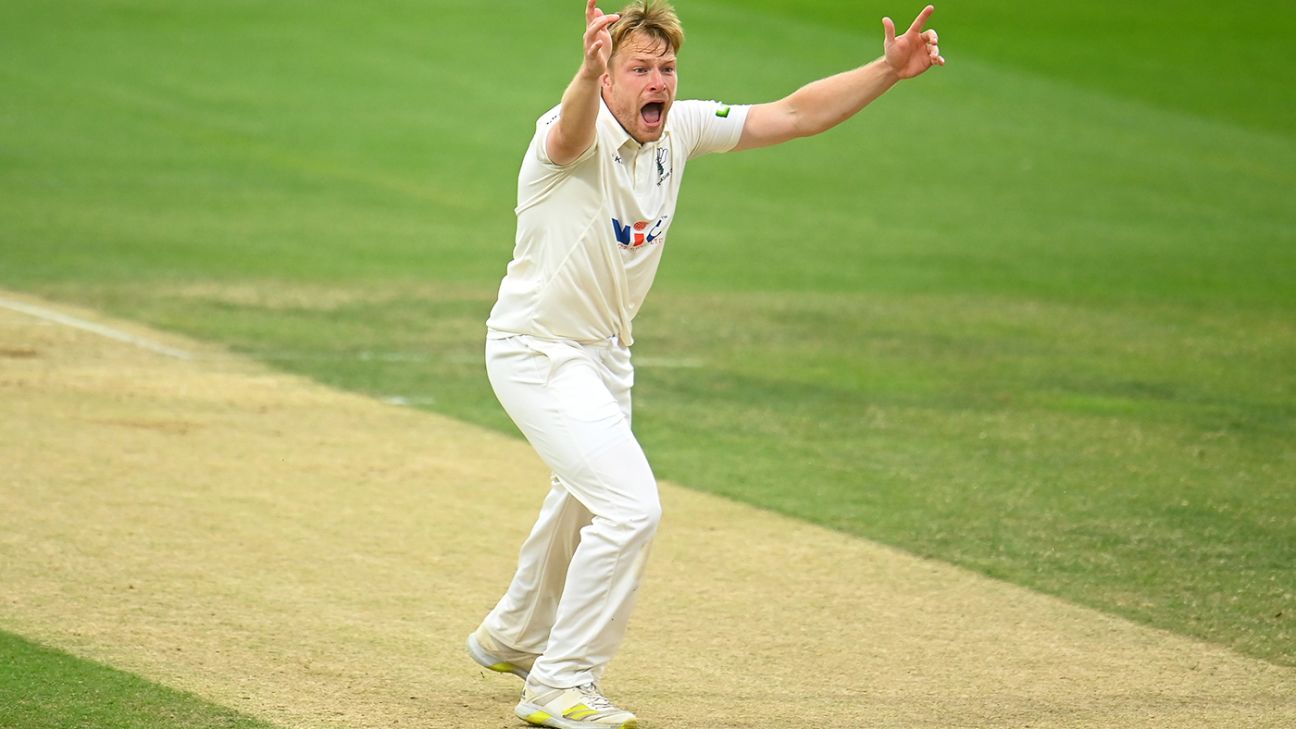 Matthew Waite has become the third player to leave Yorkshire at the end of the season after agreeing terms with Worcestershire.
Waite is Worcestershire’s second significant signing in a fortnight, following the capture of the Warwickshire middle-order batter Adam Hose. Both players have agreed three-year deals.
Although some have predicted that Yorkshire will suffer a large outflow of talent in the wake of the racism crisis that has gripped the county, Waite’s departure is more accurately an indication that the county’s cricket affairs are stabilising.
Related
Whereas Yorkshire were disappointed to lose Tom Koher-Cadmore and David Willey, the departure of Waite is a considered evaluation of whether the allrounder fitted into future plans after eight years without laying claim to a regular place.
That said, finances are under heavy strain with a restructuring underway to serve debts close to £20m and the possibility of further outlays if they lose an employment tribunal in Leeds in November, following the mass sacking of the county’s backroom staff.
Darren Gough, Yorkshire’s interim managing director of cricket, said: “With Matthew out of contract at the end of the season and a big squad of talented players vying for places here at Yorkshire, we have been giving him opportunities to show us his skills before making a decision on his future with us.
“However, having completed a loan spell at New Road earlier this year, Worcestershire have offered him a good contract which he has opted to take. Everyone here would like to wish him every success in the future and thank him for his efforts.”
In his time at Yorkshire, Waite made 58 appearances across all three formats with 73 wickets and only one half-century. One of his best all-round performances came at Scarborough on Sunday with 3 for 21 and 36 against Worcestershire, aware that his move had already been finalised.
Worcestershire also briefly took Waite on loan earlier this season, when he stood out with six wickets against Leicestershire. At his best, he is an effervescent cricketer and they will hope that, at 26, a tendency to the erratic will begin to diminish as they seek to offset the loss of their key allrounder, Ed Barnard, who has joined Warwickshire.
Worcestershire Cricket’s steering group chair, Paul Pridgeon, said: “Matthew impressed us when he was here on loan earlier in the season, taking wickets and looking capable of scoring runs in the middle order, and obviously, it was a role we had to fill with Ed Barnard’s departure. He fitted in our dressing well, and that is something that is important to us. He fits the bill for us perfectly.”
Waite said: “Playing for Yorkshire has fulfilled a childhood dream of mine. I wish the club every success going forward. I’m 26, it’s an ideal move at this stage of my career, a fresh challenge, and I can’t wait to get started this winter.”
Tags: County Championship Division Two, Matthew Waite, Worcestershire, Yorkshire