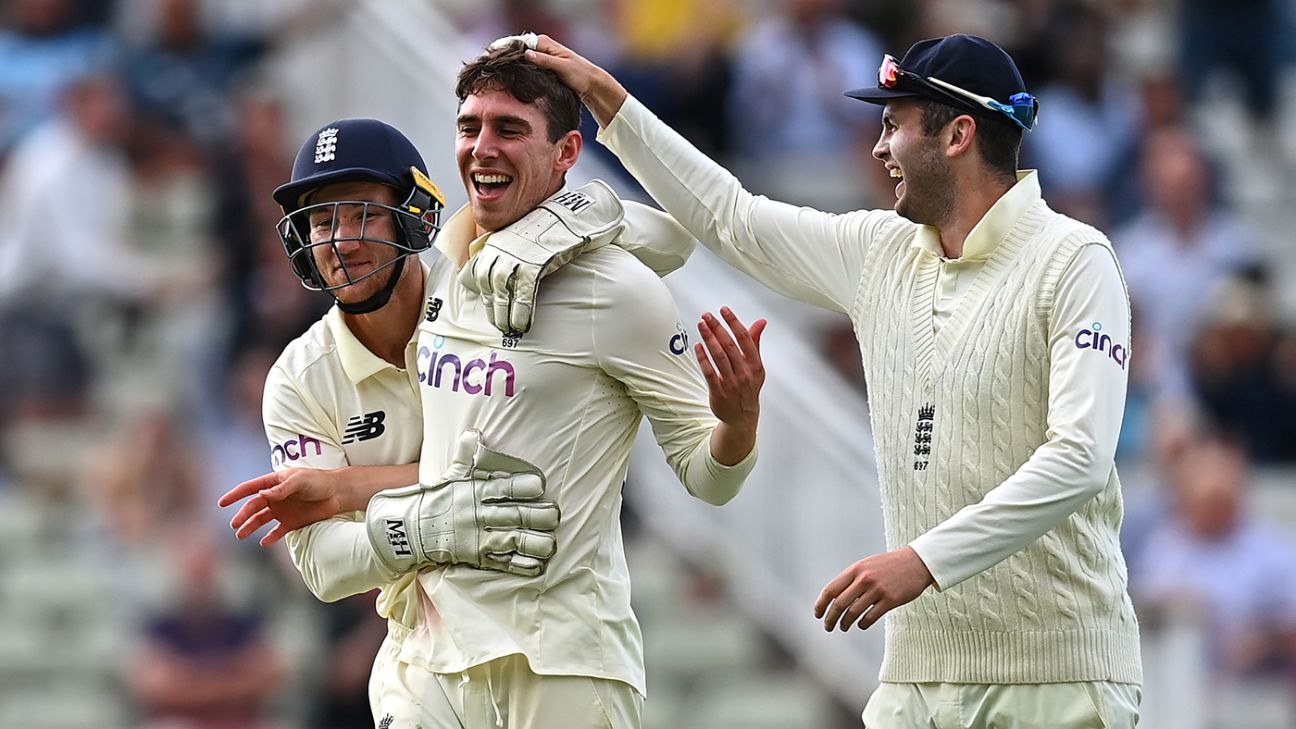 Dom Sibley and Dan Lawrence will have the opportunity to impress England’s new management after being named in a strong 13-man Lions squad to play the visiting South Africans in a four-day match at Canterbury next week.
Sibley has not played Test cricket since England’s second Test against India last summer but has had a solid season for Warwickshire in the County Championship, while Lawrence has not featured since the tour of the Caribbean after a hamstring injury disrupted the early stages of his season.
Related
Both of them will have the opportunity to push their cases to Brendon McCullum and Ben Stokes, England’s Test coach and captain respectively, ahead of winter tours to Pakistan and New Zealand. While runs for Sibley would put further pressure on Zak Crawley’s spot at the top of the order after a lean summer so far.
Eight of the 13 players involved have previous international experience, seven of them in Test cricket. Sam Billings will captain the side while Harry Brook and Craig Overton are included after being on the fringes of selection all summer. And Ollie Robinson will continue his return to full fitness after earlier this week being named in the squad for the first two South Africa Tests.
There are also spots for Keaton Jennings and Ben Duckett, who have had successful County Championship seasons after long absences from the Test set-up. Will Jacks, the Surrey allrounder, is one of two spin options named along with Nottinghamshire’s Liam Patterson-White.
Essex’s Sam Cook and Derbyshire’s Sam Conners are the other seamers involved, while James Rew, the 18-year-old Somerset wicketkeeper-batter, is the final squad member. Paul Collingwood will act as head coach.
The Lions game clashes directly with several Hundred fixtures, meaning that teams will have to cope without some of their key players: Overton (Southern Brave), Lawrence (London Spirit) and Brook (Northern Superchargers) will each miss two games, while Billings and Jacks (both Oval Invincibles) and Cook (Trent Rockets) will miss one game apiece.
Sam Billings will captain the Lions•Getty Images
“I would like to thank the Hundred teams and respective head coaches who have enabled the eight players who are playing in the competition the opportunity to play for the Lions,” Mo Bobat, the ECB’s performance director, said. “We are grateful for their support. We are delighted that the Lions will have a competitive fixture against the South African tourists. The squad strongly represents some of the country’s current, next best and future England players. For some players, this game will be important preparation going into the Test series.
“These matches for the Lions are pivotal as we try to build the depth of players that can further enhance the way the Test team have been playing this summer. It is a reward for players who have scored runs and taken wickets this season in the LV= Insurance County Championship campaign and have caught our eye in how they’ve gone about their business.”
South Africa will use the game, which starts on Tuesday, as preparation for the first Test. They have named a 17-man squad for the three-match series.
England Lions squad: Sam Billings (capt, wk), Harry Brook, Sam Cook, Sam Conners, Ben Duckett, Will Jacks, Keaton Jennings, Dan Lawrence, Craig Overton, Liam Patterson-White, James Rew, Ollie Robinson, Dom Sibley
Tags: Ben Duckett, Craig Overton, Dan Lawrence, Dom Sibley, England, England Lions (England A), Harry Brook, James Rew, Keaton Jennings, Liam Patterson-White, Ollie Robinson, Sam Billings, Sam Conners, Sam Cook, South Africa, South Africa in England, Will Jacks