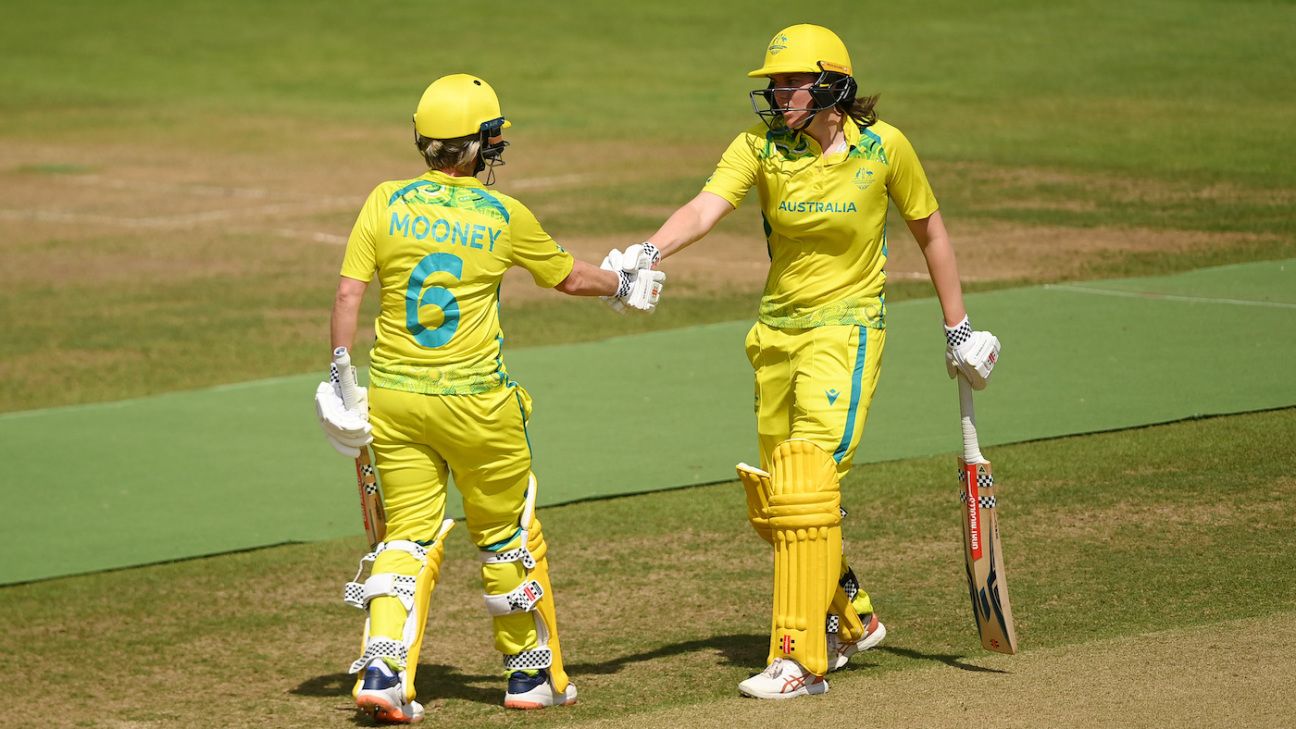 Take an inch against Australia and they’ll still win by a mile. That’s the realisation other teams have come to in recent years as the depth of talent enjoyed by the reigning ODI and T20I world champions has come to bite them again and again.
In the opening match of the Women’s Ashes in January, England started brightly with an 82-run opening stand to reach 169 for 4 from their 20-over allocation. Then Alyssa Healy fell for just 7 and Australia were 26 for 1, only for Tahlia McGrath to smash an unbeaten 91 in a 144-run stand with Meg Lanning and Australia won by nine wickets. England didn’t win another match in that series, despite challenging in the drawn Test.
Against India in their opening match of the Commonwealth Games, Australia slid to 49 for 5 chasing 155 before Ashleigh Gardner and Grace Harris launched a successful rescue mission with a 51-run partnership for the sixth wicket. And when McGrath and Beth Mooney dug Australia out of trouble at 19 for 2 in their final group match to beat Pakistan by 44 runs, a key to their success was rammed home yet again – if one or two players fail, someone else inevitably steps up.
Related
“We were in a bit of a sticky situation early,” McGrath said after the Pakistan game. “Then Moons and I both probably struggled a bit early and had to work through that. Then that sort of allowed us to have that freedom at the end and get us to what was a really good total.”
McGrath has been a revelation in T20Is, going unbeaten in four of her six innings in the format, although she said her approach wasn’t so much about valuing her wicket.
“In T20 cricket I sort of just go out there with no fear, a bit of freedom,” she said. “I get to play my shots and I know that the batters I’ve got coming in before me are world-class, that allows me to play with that freedom.
“I’ve just been lucky that I’ve had a few not-outs because it doesn’t happen very often in T20. So I’ll just ride it for as long as I can do it.”
Her partnership with Mooney has also been key, in this instance yielding 141 runs for the third wicket.
“We’re both very chill,” McGrath said. “I remember there was a game in the Gold Coast where we got caught in traffic and it was Moons and I in the car and we literally rocked up two minutes before the start of warm-up. The security guard said to us he was glad it was us two because everyone would be freaking out. It didn’t bother us at all, we’re pretty easy-going.
“We’ve batted a fair bit together now. I really enjoy with Moons and we both recognise when each other is struggling.”

JUST IN: The timings for the Commonwealth Games semi-finals have been confirmed! #B2022 pic.twitter.com/PmUarWU1kk

Mooney agreed: “She’s awesome to work with. I think we’ve got a pretty good understanding of each other and each other’s games. We’re both pretty level-headed people.
“She just comes out and plays to her strengths straight away and takes some pressure off the person at the other end, so she’s a very impressive player and hopefully she can continue that form for a while yet.”
Their union against Pakistan was all the more important after Healy, the hero of Australia’s ODI World Cup triumph in April, fell for four runs, as did Lanning, the captain. In six innings since her knock of 170 in the World Cup final against England, Healy has not passed 23. But Mooney wasn’t concerned.
“She’s looking really good in the nets,” Mooney said of Healy. “She’s just been a little bit unlucky. We also know that when we get into semis and finals, that she steps up and is one of the best players in the world.
“So there’s no doubt in our changeroom that she’s going to show up and do that again for us. We’re really behind her and we know that she’s got the capacity to do some serious damage against the opposition, so I’m sure she’ll be fine.”
With Australia having set such a high standard for themselves, Mooney warned against seeing them as “robots” in light of “a couple of low scores”.
With the ball, Australia are also in a good place. McGrath took 3 for 13 against both Pakistan and Barbados, while spinners Alana King and Jess Jonassen have been in fine form.
Alana King has added another dimension to Australia’s attack•Getty Images
New Zealand are well aware of the task they face in Saturday’s second semi-final of the Commonwealth Games, scheduled to start at Edgbaston at 6pm local time, which will be 3am on Sunday in Sydney and 5am in Auckland.
Having managed just 71 for 9 in their final group game – a seven-wicket loss to England, who will play India in the other semi-final earlier on Saturday – Sophie Devine, the New Zealand captain, was keen put their latest result behind them.
“We were well below par and it wasn’t through lack of effort or lack of planning or anything like that, I think you just get days like that,” Devine said. “It’s never nice to be a part of but we’ve got to flush it down the dunny pretty quickly and move on to something that’s actually really exciting for us, playing in a semi-final against Australia at a Commonwealth Games.”
And Devine embraced underdog status against a side New Zealand, like everyone else, knows are capable of great things.
“I think a lot of the pressure is going to be on Australia,” she said. “They’ve certainly come into this competition as favourites and hopeful of taking that gold medal whereas a lot of people didn’t think we’d maybe make the semi-finals.
“We can really take that on board and just play with a bit of freedom and take it to the Aussies. We obviously know them really well, so I think our plans are going to be pretty spot on and likewise they know us really well too. It’s always just a great battle against the Australians.”
Tags: Alana King, Ashleigh Gardner, Australia Women, Beth Mooney, Commonwealth Games Women's Cricket Competition, Grace Harris, Jess Jonassen, New Zealand Women, Sophie Devine, Tahlia McGrath