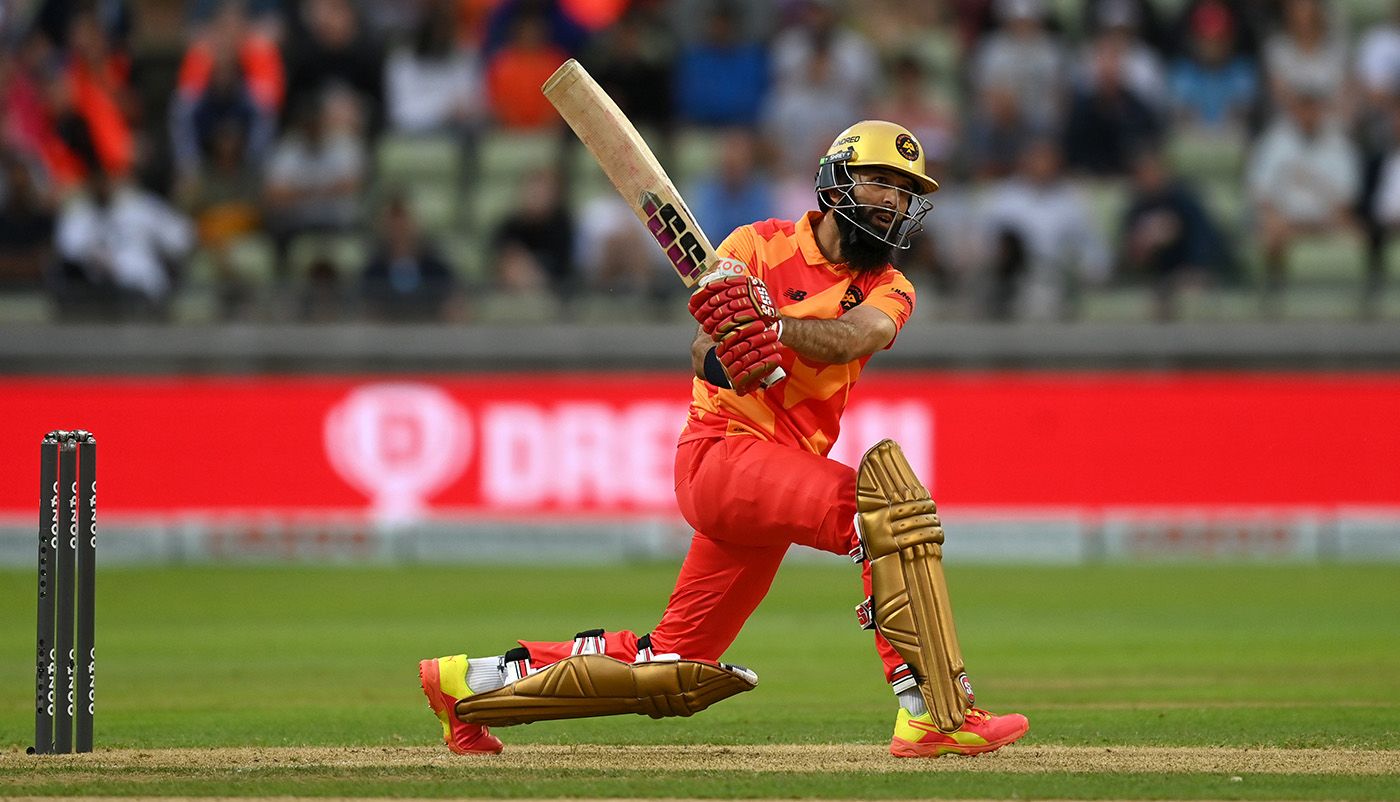 After a summer of indifferent white-ball performances from the men’s senior side, arrives the Hundred, as exactly the whiff of fresh air the national team might be in need of. England began this season well, with a comfortable sweep of the ODI series against Netherlands, but have since faltered, losing seven of their last 11 completed white-ball internationals.
The Hundred comes amidst a change of captain and coach for England, a few losses, an air of general transition, and also, according to Moeen Ali, an opportunity for younger guys to make a name for themselves, and to audition for a spot in a side looking ahead imminently to the T20 World Cup.
As he did last year in taking them to the final, Moeen will lead Birmingham Pheonix, and start their campaign on Saturday against Trent Rockets. And while Moeen has adapted creditably under the new England regime, he recognises that the pressure on others in the national fold from players outside is not only inevitable but also healthy.
Related
“It is a great thing [having that competition for places], and [there is] a lot more competition now than there was before,” Moeen said, speaking ahead of the launch of KP Snacks’ summer cricket roadshow at The Black Prince Trust in Oval. “When you don’t play well – or you’re losing – there’s always going to be changes, and I do think it’s a great thing.
“With the change of coach and captain, there’s always a chance of new faces coming in, just like when Morgs [Eoin Morgan] and Trevs [Trevor Bayliss] took over in 2015. There was a lot of fresh faces. They give you a lot more energy.
“It’s going to keep all the senior players on their toes because there are some fantastic players coming through. Everybody under pressure is really good because it’s going to benefit us in the long term.”
Moeen knows well how the tournament can throw a little-known youngster into the mix, having overseen the emergence of Will Smeed at Birmingham last season. Smeed impressed in the Blast, earned a deal at the Hundred as an injury replacement, and ended as the team’s third-highest run-scorer behind Liam Livingstone and Moeen himself; he had the second highest strike rate (172.91) among the top 20 run-scorers in the competition.
“Harry Brook will be somebody people will keep an eye on; it’s a great platform”, Moeen on the Hundred helping youngsters•Getty Images
“The Hundred is great for younger players; you can kind of pluck players out of the blue a little which is really good. A few of the teams have got some really young players this year who have been around a little bit, but [the Hundred] is a great platform for them to really shine and do well and be on that big stage,” Moeen said.
“Especially now, as England haven’t played so well this summer and if somebody has been absolutely outstanding, he’s put his hand up trying to get into that team. Someone like Harry Brook is in contention to do that; I know he’s played a couple of games but he’s a brilliant player in my opinion.
“He’d be somebody I am sure people will keep an eye on. It’s a great platform for players to do well in, to put their hands up, and do something that can catch the eye of the captain and the coach because everybody will be watching.
“That’s important for the younger players, that there is a sort of window for players now. In the past it was quite difficult for players to get picked for England because the side was doing well. But I think there are a couple of spots – or at least a chance – for players to do really well.”
Moeen may be a World Cup winner, with experience of captaining England; he may be 17 years into his professional career; he may even have led Birmingham to last year’s final, but the format feels fresh enough for him to feel the need to cram in some last-minute revision ahead of Saturday.
“The death bowling is the tricky one because it’s five balls, and you stay at the same end,” he said. “You kind of need three death bowlers in the end – one just in case – because [it is] more than likely they will bowl in the last 15 balls. There’s little things like that and I’ll need to remind myself again of the exact rules again.
“The whole over-rate thing is a brilliant rule, with the one fielder coming up. We’ve got to go through the rules again. It’s obviously been a while since we played it.”
KP Snacks, Official Team Partner of The Hundred, are touring the country this summer to offer more opportunities for people to play cricket as part of their ‘Everyone In’ campaign. Visit everyonein.co.uk/about
Tags: Birmingham Phoenix (Men), Moeen Ali, The Hundred Men's Competition