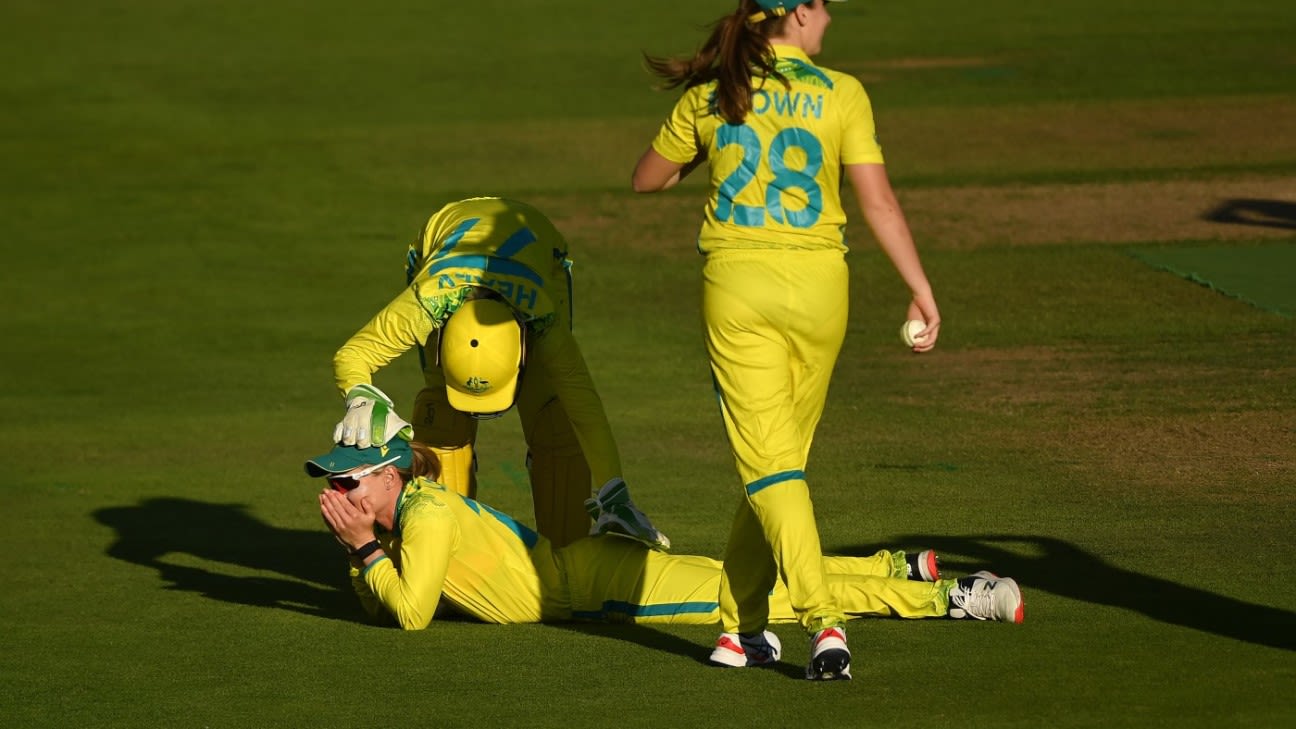 “Are you going to have nightma…”
“Yep!”
The question wasn’t even fully formed and Meg Lanning had given her answer. No, she would not be sleeping well after dropping the catch that would have handed legspinner Alana King a hat-trick, just the second for her country in women’s T20Is.
In fairness, Lanning, the Australia captain, was as good-natured as anyone could possibly be about the situation, from burying her face in the Edgbaston turf right there at slip where if you gave her 99 similar chances she’d take them, to wincing in the background as reporters quizzed King a couple of metres away afterwards about the incident and then fronting up to the same journalists, knowing full well what was coming.
“I’ll have nightmares,” Lanning said. “I wanted to dig a hole and jump in it as quick as I could. I tried my best and I dropped it.”
Softening the blow somewhat was the fact that Australia had one foot in the Commonwealth Games semi-finals with Barbados 53 for 8 at that point. Barbados managed just 64 before being bowled out. Then Australia, led by Lanning’s unbeaten 21-ball 36, overhauled the target with 71 balls to spare and sealed a place in the knockout stages with one group game to go.
Asked if her innings was a response to her faux pas in the field, Lanning said: “I wasn’t overly pleased, let’s put it that way. I was just disappointed for Kingy. She was bowling so well and to let her down like that was not ideal. But that’s cricket, I guess.
“I was just keen to contribute really. I was just pouncing on some loose balls when I got them and giving myself a chance and it felt like I was able to do that.”
Deandra Dottin conceded 25 runs off her first over, the last of the powerplay, all to Lanning and extras as Australia, via their captain, accelerated after a watchful start on a slow, hybrid pitch staging its sixth match in three days. From that point, Alyssa Healy joined the fray also, moving from four runs off 14 balls to 23 not out off 24 as Australia eased to victory.
For her part, King was understanding.
“That’s cricket, right? No one means to drop a ball or anything,” King said. “It’s just the way the game goes, but I’m just happy that I could contribute in any way I can.
“Every ball I bowl, I’m trying to get a wicket so that was no different but it caught the outside edge and yeah, that’s just cricket, I guess. But I’m just really happy with how I played today.
“I felt that there was definitely a bit more bite in the wicket today. It is the sixth game on it so it’s a bit tired, a bit slow, which works into our hands a little bit.”
King entered the attack in the eighth over after Lanning had won the toss and sent in Barbados, who lost captain Hayley Matthews early for what turned out to be their top score, on 18.
King struck with her second ball, brushing the outside of Dottin’s front pad in line with middle stump as she knelt down to tuck the ball to fine leg, having faced 22 balls for her eight runs.
After Tahlia McGrath claimed the first of her three wickets when she had Kycia Knight caught by Megan Schutt at deep backward square and Ashleigh Gardner bowled a tight spell, including a double-wicket maiden to remove Kyshona Knight and Trishnan Holder, King roared back into action.
At the end of her second over, King dismissed Aaliyah Alleyne playing across a ball that pegged back leg stump. Then, with the third ball of her third over, King pinned Shakera Selman lbw and then struck Shamilia Connell on the back leg next ball. What followed as Keila Elliott’s edge somehow popped out of Lanning’s hands at first slip was the stuff of bad dreams. Fortunately for Australia, it was all right on the night.
Tags: Alana King, Australia Women, Barbados Wmn vs AUS Women, Commonwealth Games Women's Cricket Competition, Meg Lanning