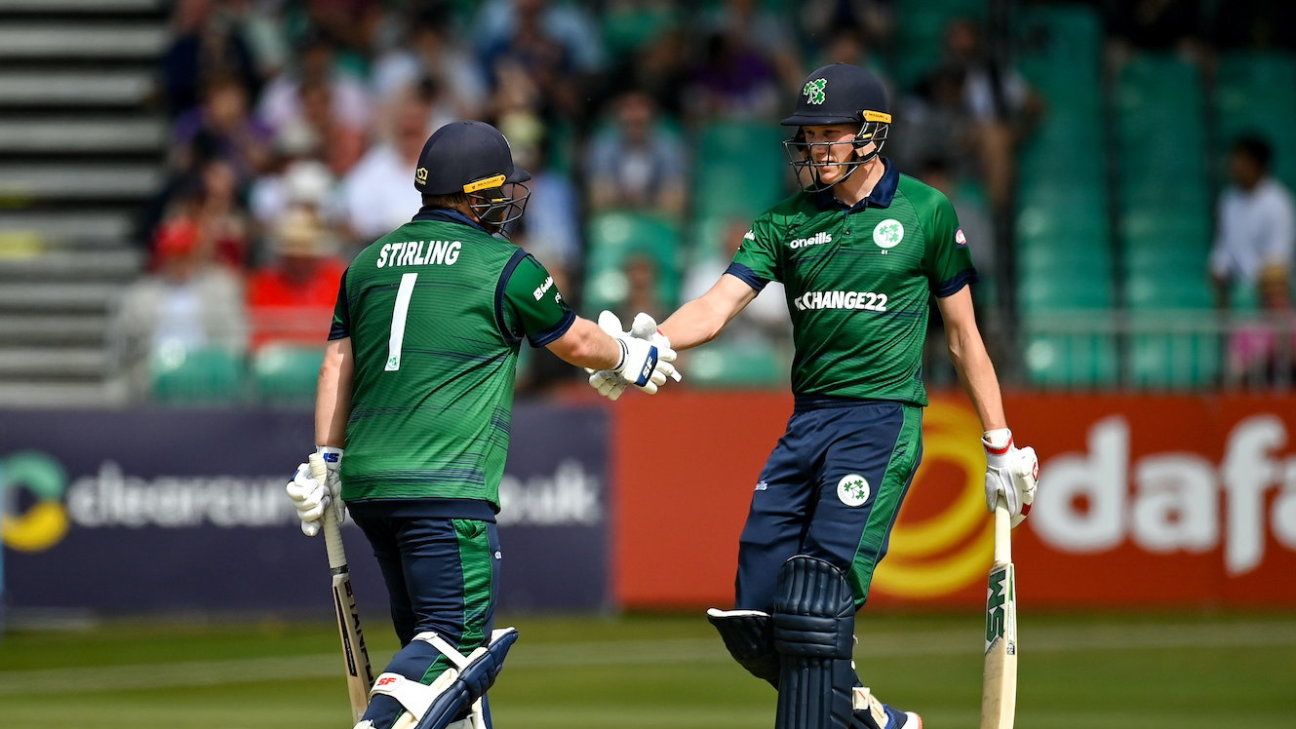 In an ideal, and somewhat fairer cricketing world, series like this would take place more often. An established Full Member would play a more recently anointed one every few years, not just before a World Cup and not only to fill in a gap between series and it’d be a standalone, big-deal event. Almost like the tour South Africa had of Ireland last year, where they played three ODIs as part of the World Cup Super League and three T20Is, close but not quite as close as this one, to the T20I World Cup. But that doesn’t happen very often and Ireland won’t be complaining about an opportunity to get in more games against big names in what has finally been a busy season.
They’ve hosted India and New Zealand so far but have yet to win a T20I series under new coach Heinrich Malan, who will be familiar to the South Africans. Malan played some provincial cricket at Northerns before relocating to New Zealand where he coached for almost a decade and then moved to Ireland and while his team have pushed their opponents to their limits, victory has still been elusive.
Ireland ticked a major box when they qualified for the T20 World Cup in February but have lost six matches since then, some of them in heartbreaking fashion. They ran India close in the second game of their two-match series, and posted a decent total against New Zealand in the third match of that rubber but in between had a blow-out when they were bowled out for 91. Luckily for them, this series is not their last opportunity to fine-tune ahead of the T20 World Cup. They will host Afghanistan for five T20Is starting next week, which presents another opportunity to get things right ahead of a major tournament.
South Africa, on the other hand, don’t have much time to tinker. They will play India in three T20Is just before the T20 World Cup and will likely go in with their World Cup squad. That leaves only these two matches to finalise what is becoming an increasingly complicated selection conundrum but, as stand-in captain David Miller said, rather a problem of too many options than too few.
Most of the squad is in good form but Quinton de Kock will want to get some runs in the shortest format, where he hasn’t had a half-century in nine innings, and some of the reserves will be itching for an opportunity. Wayne Parnell, Dwaine Pretorius and Rassie van der Dussen were on the bench for the England series and will hope to get a chance as the white-ball section of South Africa’s UK tour comes to an end.
Quinton de Kock will want to get in some big runs this series•AFP/Getty Images

There’s some talk of Harry Tector being among those under consideration for CSA’s new T20 league and if the rumours are true, he will give South African fans a taste of what he can do. Known for striking the ball cleanly, Tector flexed his muscles with an unbeaten 64 off 33 balls against India earlier in the season and has gone on to enjoy the summer of his career. He has scored 384 in 14 ODIs at 76.80, including two hundreds in three matches against New Zealand and three successive fifties against West Indies; and 249 runs in nine T20Is at 35.57. Tector also has deals with teams in the 6ixty and the CPL and is well on his way to becoming Ireland’s most sought after franchise player.
These matches are likely to be the last opportunity for Reeza Hendricks and Rilee Rossouw to secure their spots at the T20 World Cup. As South Africa’s most in-form top-order batters, it may seem unfair to make them prove themselves again but with de Kock a certain starter, Temba Bavuma likely to return from injury and options including Pretorius as a pinch-hitter at No. 3, the selectors could find themselves forced to pick between these two players. Better them than us. Hendricks has reeled off three half-centuries in a row, Rossouw struck a fearless 96* to allow South Africa to draw level in the series against England and are seeing and hitting the ball as well as ever.

With short straight boundaries, and fairly short square ones, Bristol is a ground where bowlers, and spinners in particular are put under pressure. England racked up their second-highest T20I score there last week and more than 400 runs were scored in their match against South Africa. Tabraiz Shamsi and Moeen Ali were the specialist bowlers who conceded most of the runs and it will be interesting to see how Shamsi, who finished the England series as the leading wicket-taker, comes back at this venue. For the big-hitters, this is a place to show their power and the likes of Tristan Stubbs and Paul Stirling will be looking to make big statements. There’s some drizzle on Wednesday morning but the forecast is dry for both matches.

“We’ve shown that when we stand up to these teams, we are capable of going blow-for-blow with them, and it feels that way within the group. The belief is there that we can beat these big teams, and not get nervous about any team we play. We go out there and want to win, we expect to win, and I guess that’s where it has been a bit disappointing this summer as we have got so close so many times. The flip side of that is that we know we’re not that far away, and we know we have better cricket in us as well, which is what is so exciting.”
Ireland’s Harry Tector
“It will definitely be a new, exciting challenge for us. We played them quite recently in Ireland and we saw exactly what they could do. They are improving series by series, we saw them against India, and they are a team you can’t take for granted.”
South Africa’s Aiden Markram
Tags: Ireland, South Africa, South Africa in England, South Africa vs Ireland