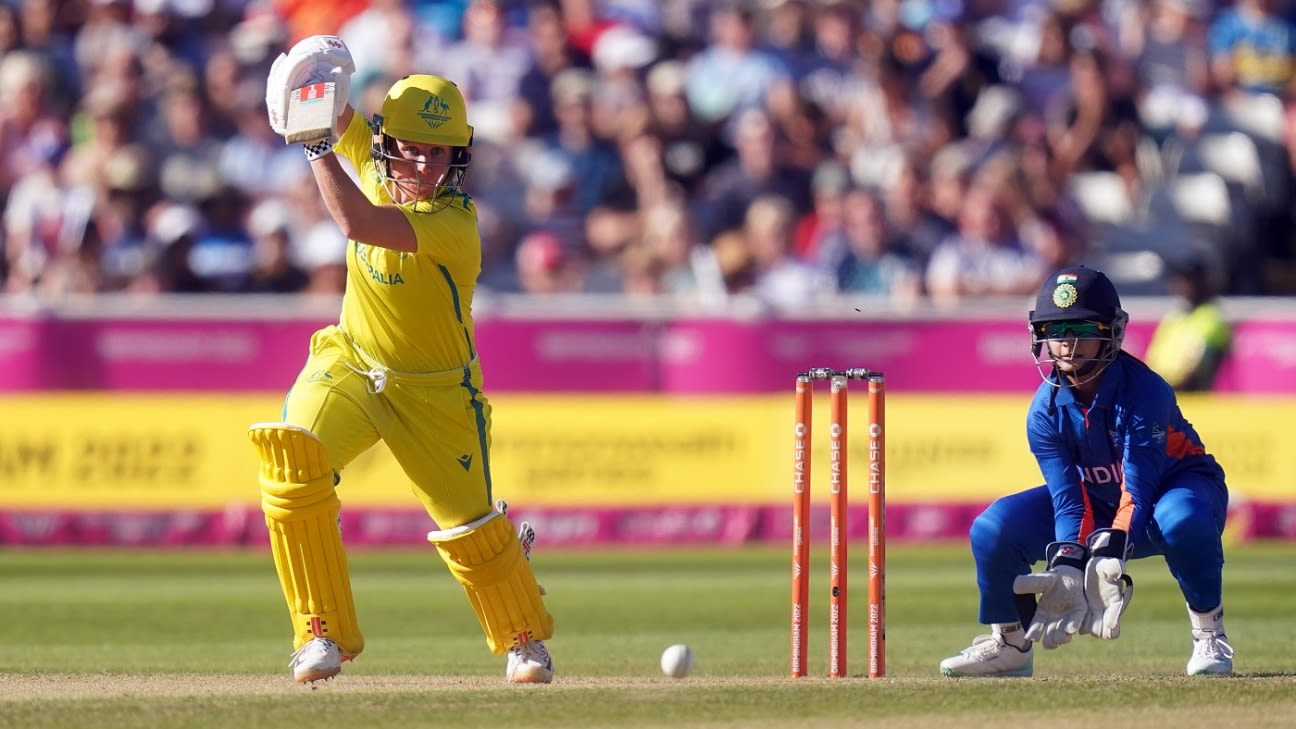 Beth Mooney has reclaimed the No. 1 spot for batters in the ICC women’s T20I rankings after topping the CWG 2022 run-scorers’ chart, finishing with 179 runs from five innings. Tahlia McGrath (No. 5) has joined Mooney, Meg Lanning (No. 2) and Alyssa Healy (No. 9) in the top ten, while Jemimah Rodrigues is now one of three Indians – who finished runners-up to Australia in Birmingham – in the top ten after a seven-spot jump to No. 10; Smriti Mandhana (No. 4) and Shafali Verma (No. 6) are the others.

Mooney had slipped behind Lanning in the previous rankings update, but knocks of 70* against Pakistan, 36 in the semi-final against New Zealand, and a 41-ball 61 in the final against India gave her a tally of 179 runs for the tournament, and took her back past Lanning to the top. Lanning didn’t have a particularly good time of it with the bat in Birmingham, totalling just 91 runs, but it was enough to keep her in second place.
Rodrigues went through a career slump recently, but has bounced back strongly, aggregating 146 runs at CWG 2022, with her best outings coming against Barbados (56 not out), against England in the semi-final (44 not out) and against Australia in the final (33). Only Mandhana scored more in the tournament among Indians, 159.
2:23

Rodrigues: ‘This team has a lot of potential and will do wonders’

Among the bowlers, Sophie Ecclestone held on to the top spot after picking up five wickets in Birmingham, but there were some changes below her within the top ten. Katherine Brunt picked up five wickets too, at an economy rate of 5.06 (Ecclestone went at 6.29) and rose to No. 2, while Shabnim Ismail and Megan Schutt both moved up two positions, to fourth and fifth respectively. Sarah Glenn, who was at No. 2, has dropped to third place.
Sophie Devine had a memorable tournament on the personal front, while leading New Zealand to a bronze-medal finish. Devine hit 177 runs, only behind Mooney’s tally, and picked up six wickets at an economy rate of 6.59, to stay atop the allrounders’ table. Ash Gardner, meanwhile, has moved up to No. 2, crossing Nat Sciver after scoring 96 runs and picking up five wickets in Birmingham. Deepti Sharma has moved up to fourth on that table.
Some South African players also made gains, even though their team didn’t make the final four. Nonkululeko Mlaba has risen to eighth, up 14 places, among bowlers after picking up three wickets in three bowling innings, while batters Anneke Bosch (up five spots to No. 20) and Tazmin Brits (up six places to No. 22) were also on the move.
Tags: Ashleigh Gardner, AUS Women vs IND Women, Australia, Beth Mooney, Commonwealth Games Women's Cricket Competition, England, India, Jemimah Rodrigues, Katherine Brunt, Megan Schutt, New Zealand, Nonkululeko Mlaba, Shabnim Ismail, Sophie Devine, Sophie Ecclestone, South Africa, Tahlia McGrath