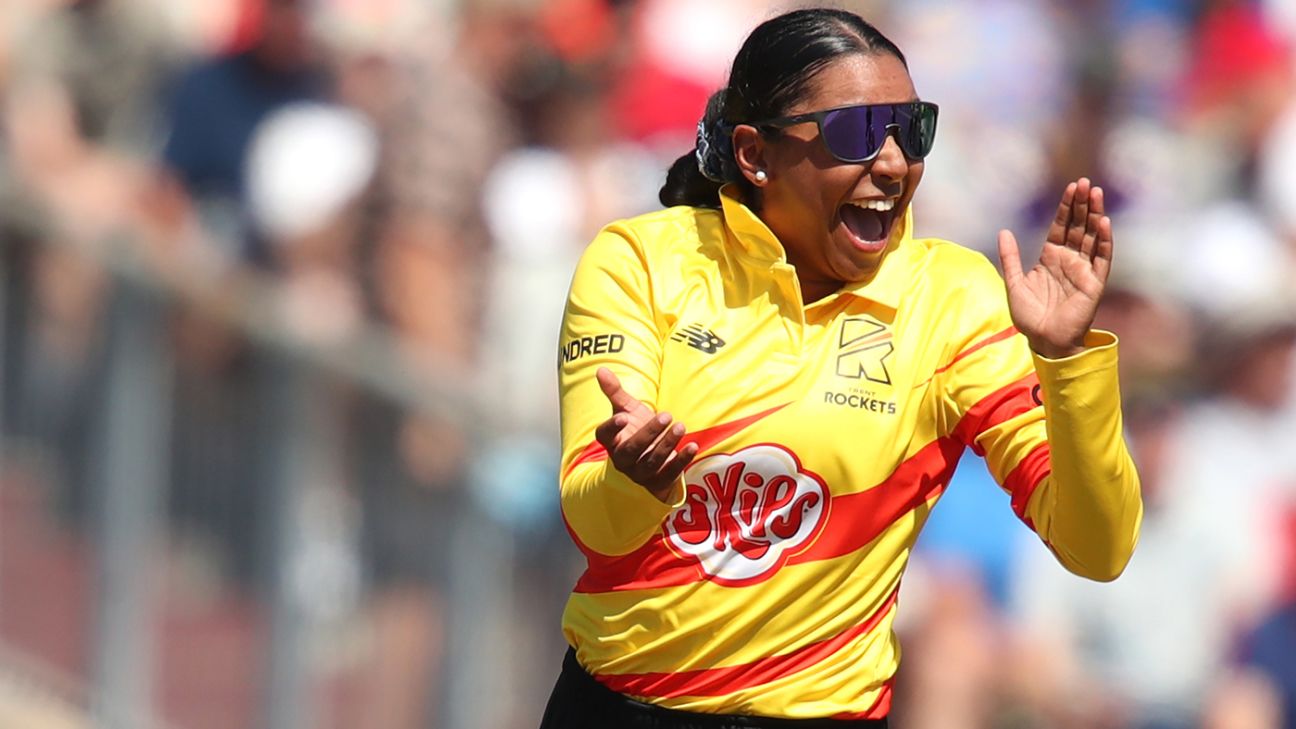 Alana King paid a touching tribute to her hero Shane Warne after taking her first ever hat-trick, with the feat coming at Emirates Old Trafford, the ground where the late Australian icon made his name almost 30 years ago.
Aussie legspinner King claimed a stunning treble as part of a haul of 4 for 15 as Trent Rockets beat Manchester Originals to make the perfect start to their women’s Hundred campaign, winning by 44 runs in defence of a 120 target.
The 26-year-old Commonwealth Games gold medalist – who narrowly missed out on taking a hat-trick in the group stage against Barbados – bowled Cordelia Griffith, trapped Sophie Ecclestone lbw and bowled Kate Cross to etch her name into history with the first hat-trick in one-and-a-bit seasons of the women’s Hundred.
Related
“Will I get my name up here at Old Trafford?” she asked. “That would be brilliant. Hopefully right next to Warnie. He took poles here for fun, and I’m sure he was looking down pretty happy.”
King was of course referring to Warne’s ball of the century to Mike Gatting here in 1993.
“He was a massive inspiration, but it wasn’t just me. It was kids all around the world who he inspired to pick up legspin. He was definitely the reason I picked up legspin. Hopefully he’s been proud watching down on me spin a few.
“When I was a bit younger, I did a couple of sessions with him. All I remember from that was him saying, ‘Spin it hard and have some fun’. I live by that every single day.
“That’s my first hat-trick. Not even in juniors did I take one. My first hat-trick at Old Trafford, I couldn’t have written it.
“As soon as I got that first wicket, I knew I had to keep aiming for the stumps. I’m just stoked that I can play my part for this team. Kate Cross came up to me after the game and said, ‘I can’t believe I gave that wicket to you’.”
Not only did King shine with the ball, she contributed two sixes in a crucial unbeaten 19 off nine deliveries at the end of the Rockets innings, boosting them to 119 for 5. She also took a smart low catch out at deep midwicket.
King added: “The atmosphere was absolutely incredible. To get our first win was pretty special. We knew we were under par with the bat, and we needed to stick to our game plan with the ball. We wanted to take some early wickets in the powerplay, which we did. As soon as we got their two openers out, we knew the pressure was back on them.”
Originals’ coach Paul Shaw said: “In the first half, I thought we bowled and fielded really well, and we were happy chasing 120. But then the second bit, we didn’t play like we wanted to play.
“Alana King’s a quality performer who will be around for a long time. She bowled really, really well. But we didn’t play her that well.”
Tags: Alana King, Manchester Originals (Women), Rockets vs Originals, Shane Warne, The Hundred Women's Competition, Trent Rockets (Women)