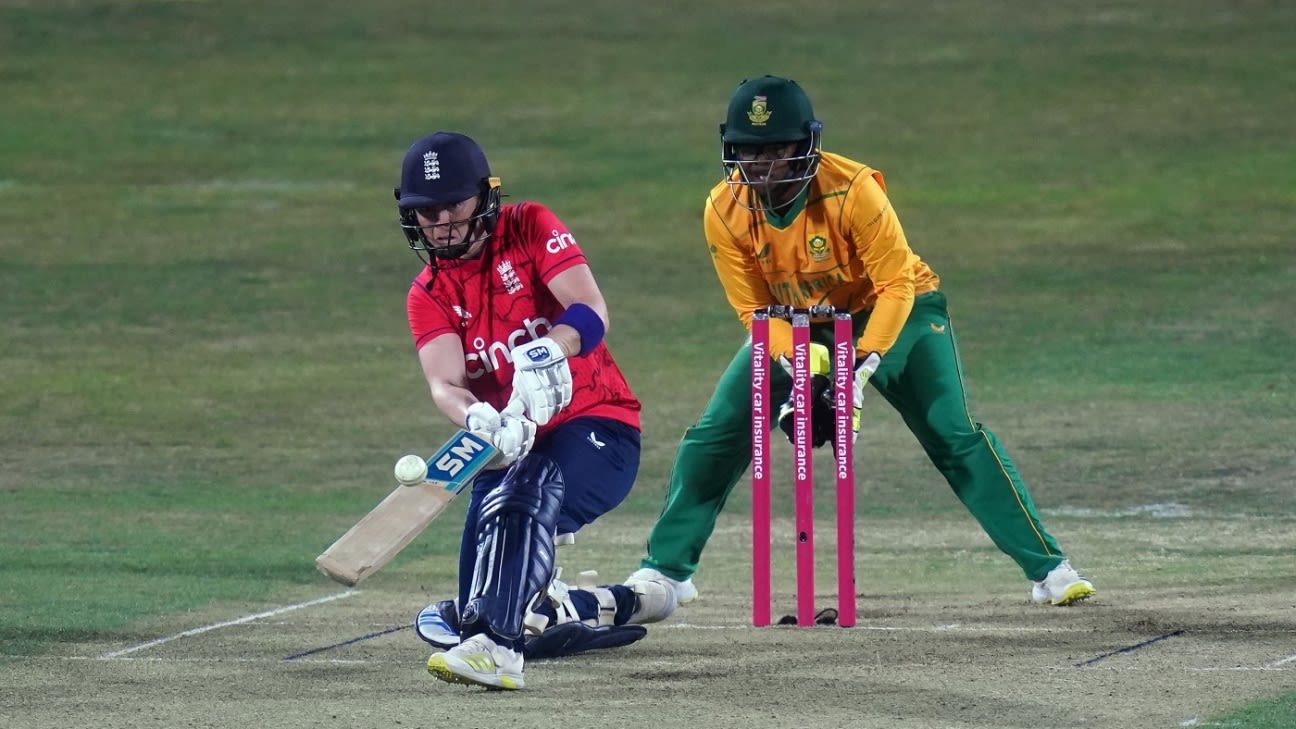 Heather Knight will miss England’s opening match of the Commonwealth Games, against Sri Lanka on Saturday, with a hip injury.
Knight, the England captain, suffered the injury during the first T20I against South Africa on July 21 and subsequently missed the remaining two matches of that series, which her side won in her absence.
Knight is hopeful of being fit for England’s second game, against South Africa on Tuesday.
That means Nat Sciver, Knight’s deputy, will captain England on their maiden appearance at the Commonwealth Games.
England swept the T20I leg 3-0 in their multi-format series against South Africa, which the hosts won by 14 points to two, having also won all three ODIs and drawn the Test match.
They managed comfortably in Knight’s absence, winning the second T20I by six wickets with six balls remaining, Sciver, the stand-in captain on both occasions, top-scoring for England with 47 alongside Danni Wyatt’s 24-ball 39 as England overhauled a target of 149.
Related
In the final match, they promoted 17-year-old Alice Capsey, playing just her second international match and batting for the first time, to No. 3 when opener Sophia Dunkley fell for a first-ball duck. Capsey impressed with 25 off 17 balls, which included four consecutive fours, and spinner Sophie Ecclestone helped seal a 38-run victory with her unbeaten 33 off just 12 before taking 2 for 24.
Speaking before being ruled out of the Games opener, Knight said she believed her side would take a “massive amount of confidence” from their performances in the South Africa series.
“The main thing is we take that same mindset into a big world event, we take what we’ve done so well and perform it under pressure,” Knight said. “You know that if you don’t start well in those sorts of events you can be under the pump so it’s so important that what we’ve done, we build on and we continue to have that mindset.
“There’s still ways I think we can improve and I’d love to see us piece it all together in a big world event.”
Capsey is one of two 17-year-olds in the England squad, along with left-arm seamer Freya Kemp, who took two wickets on debut in their last ODI bowling alongside another newcomer to the bowling ranks, 20-year-old quick Issy Wong.
“It’s really exciting,” Knight said. “The young girls have really added something to the squad. They’ve added that energy, that rawness, that fearlessness and for us older girls it’s keeping us young and keeping us excited.
“I’m loving being part of the early stage of their careers and trying to help as much as I can and just let them loose and give them the confidence to do what they do and show off. I think we’ve got that nice combination of excited youth and hopefully a few wise old heads as well.”
Tags: Commonwealth Games Women's Cricket Competition, England, England Women, Heather Knight, SL Women vs ENG Women