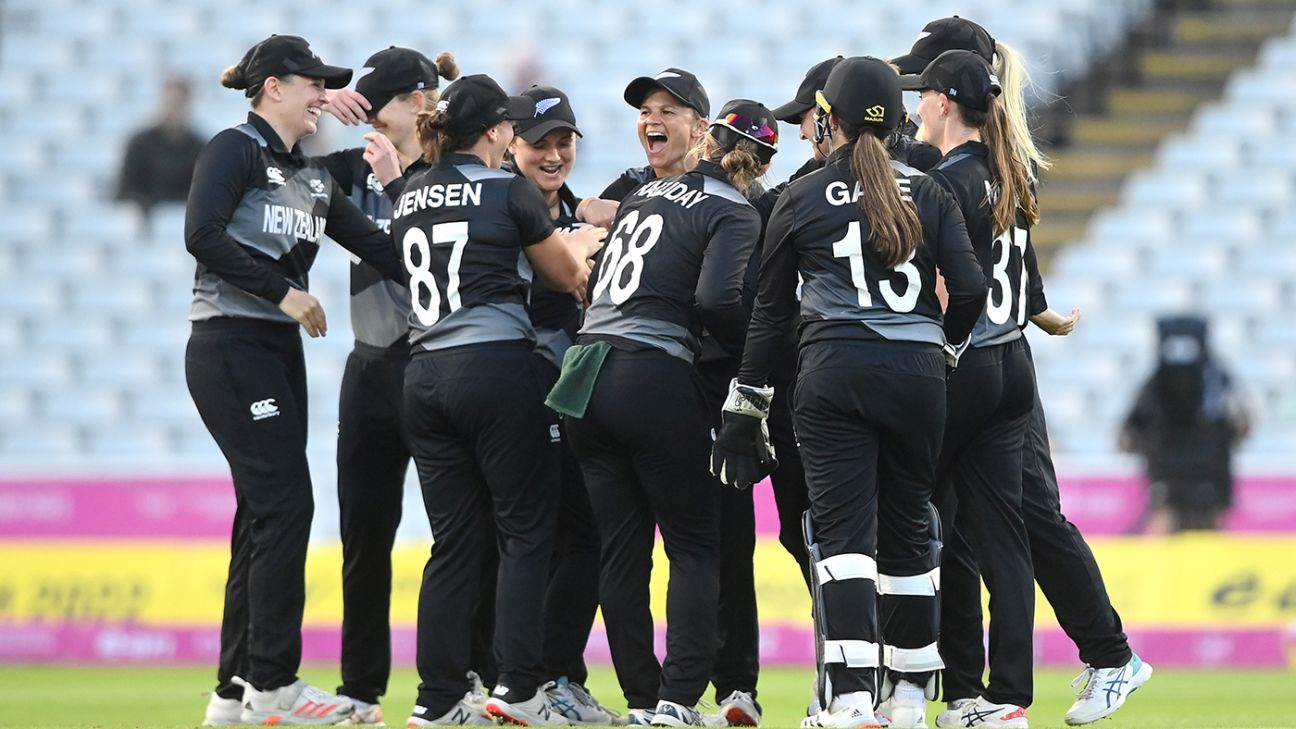 New Zealand Women 147 for 7 (Bates 34, Ranaweera 3-30, Ranasinghe 2-31) beat Sri Lanka Women 102 for 8 (de Silva 36, Jensen 3-5, Carson 2-30) by 45 runs
A strong opening partnership and a priceless eight-ball cameo from Lea Tahuhu, followed by some incisive bowling led by Hayley Jensen saw New Zealand beat Sri Lanka by 45 runs and march into the semi-finals of the Commonwealth Games. The result also helped England confirm the other semi-final spot from Group B .
Sri Lanka have never beaten New Zealand in a T20I and that record was theirs to change when the spinners were in operation in the middle overs – New Zealand could manage only 67 runs for the loss of five wickets between overs 7 and 16. However, a strong finish from New Zealand followed by a capitulation from their own batters denied Sri Lanka.
Bates, Devine get going
Sri Lanka began with spinners from both ends in a bid to keep Sophie Devine and Suzie Bates quiet. But Devine broke the shackles with two fours off Oshadi Ranasinghe in the second over. Bates and Devine then combined to hit a four each off Sugandika Kumari’s third over inside the powerplay.
Despite the track assisting the slow pace of the spin twins, New Zealand had managed to get to 41 for none when the fielding restrictions ended.
Ranaweera, Ranasinghe trigger collapse
Inoka Ranaweera was immediately summoned after the powerplay. While Bates struggled to middle her sweeps, Devine had managed to get underneath one and deposit it over deep square leg. Devine and Bates added their 12th half-century stand in the format with the former on course to become only the second woman to hit 100 T20I sixes after Deandra Dottin. However, a well-judged catch from Kavisha Dilhari after getting to her right from long-off ended Devine’s pursuit of the milestone for now. Ranaweera then had Amelia Kerr missing a darted length ball to be bowled.
Ranasinghe struck twice in her third over to trigger a collapse. She first had Maddy Green brilliantly caught behind by Anushka Sanjeewani before the wicketkeeper pulled off another terrific diving catch after running towards point to end Bates’ stay. From 51 for none, New Zealand had slid to 79 for 4, which became 89 for 5 when Jensen was stumped.
Tahuhu, the batter
While Brooke Halliday and Isabella Gaze – the latter batting for the first time in international cricket – resurrected the innings, it was not until Tahuhu walked out that New Zealand’s finish got the desired impetus.
She hit a four and a six off successive deliveries from Ranaweera to get going before helping score 13 off the final over of the innings to power New Zealand close to 150. Tahuhu’s stay of eight deliveries had yielded 20 runs.
Sri Lanka fold cheaply
For Sri Lanka to chase down 148, Chamari Athapaththu would have had to score big. But her ungainly four-ball stay ended when she walked down to Jensen’s inswing only to york herself and be bowled. This was after New Zealand missed opting for a review for lbw against her on the very first ball.
Hasini Perera was clueless against Jensen’s swing and Tahuhu’s pace, piling on the dots. Vishmi Gunaratne’s enterprising cross-batted shot then found mid-on before Jensen ended Perera’s misery. Jensen also bowled Sanjeewani to finish with 3 for 5 from her four overs.
Eden Carson picked up a couple of wickets – her first in internationals – to further dent Sri Lanka. Nilakshi de Silva’s 36-run knock helped Sri Lanka get close to 100 before she mishit a wrong’un from Kerr to mid-off.
Though they managed to cross the hundred-run mark, the result was almost inevitable after the initial exchanges in the chase.
Tags: Commonwealth Games Women's Cricket Competition, Eden Carson, Hayley Jensen, Lea Tahuhu, New Zealand Women, Nilakshi de Silva, NZ Women vs SL Women, Sophie Devine, Sri Lanka Women, Suzie Bates