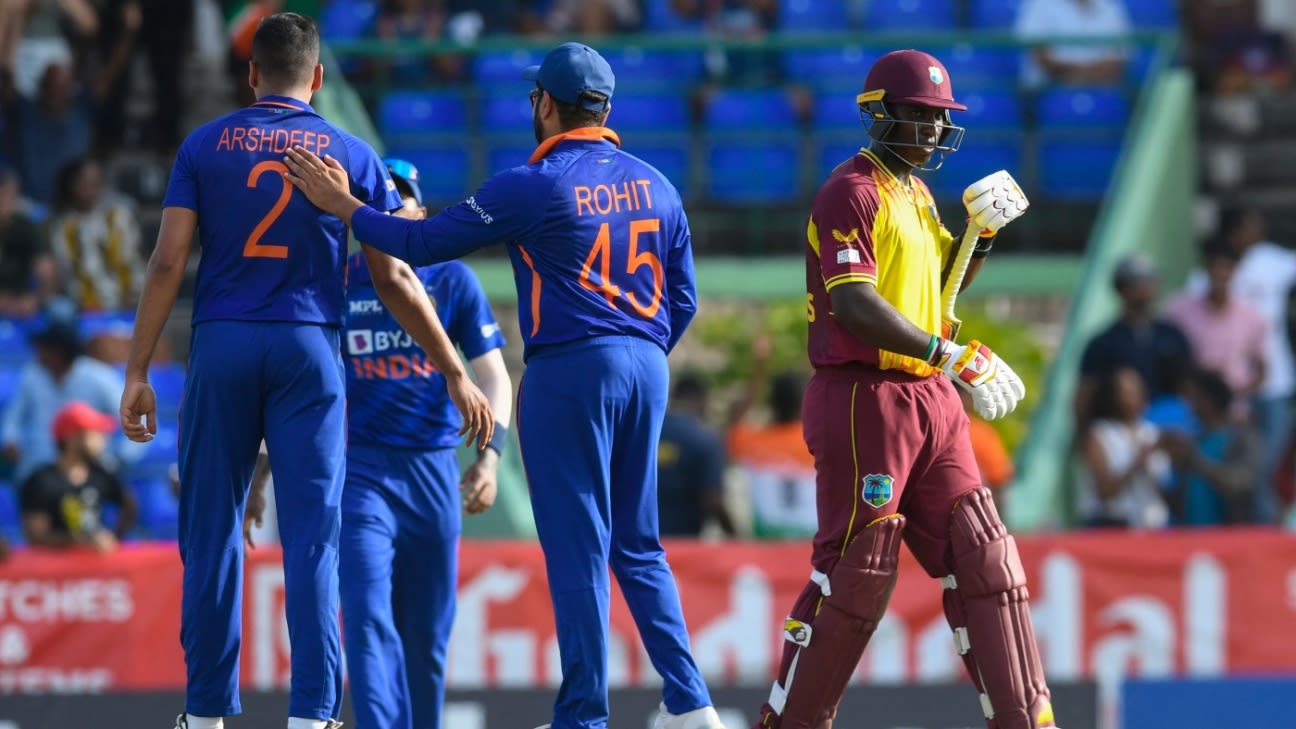 After 39 overs of the second T20I in St Kitts, West Indies needed 10 runs off six balls to complete a series-levelling victory, with five wickets in hand. Bhuvneshwar Kumar, India’s most experienced fast bowler, had only bowled two overs, and had only conceded 12 runs. He may have seemed the natural choice to bowl the final over, but India captain Rohit Sharma chose instead to toss the ball to Avesh Khan, who was playing only his 10th T20I. Avesh had taken an important wicket, yorking top-scorer Brandon King in the 16th over, but he had gone for 19 runs in his first two overs.
On the day, the move didn’t come off, with Avesh overstepping off the first ball, and giving away a free-hit that Devon Thomas scythed for a six over extra-cover. Thomas applied the finishing touches with a four next ball, but Rohit wasn’t too perturbed by the result, and believed Avesh would learn from the experience.
Related
“It’s all about giving the opportunity to these guys,” Rohit said after India’s defeat. “We know what Bhuvneshwar Kumar brings to the table for us. He’s been doing it for so many years, but if you don’t give opportunity to guys like Avesh, Arshdeep [Singh] and all those guys, you will never find out what it is like to bowl in the death overs for India. They’ve been doing it well for the IPL franchises, but this is a different ball game. These are the games [where] you try and see how they respond to those [pressure] situations, but yeah it’s just one game.
“I don’t think we need to… or those guys need to panic about stuff. They have the skills, they have the talent; it’s just about backing it and giving them the right opportunity.”
Arshdeep, the left-arm seamer, was central to India dragging the game to the last over. He had also conceded a boundary via a free-hit, to Kyle Mayers, in the powerplay, but was outstanding at the death with his variations in pace, length and angles. He conceded just ten runs off the 17th and 19th overs, while Hardik Pandya and the spinners did their bit as well. Rohit was particularly impressed with India’s late rally with the ball.
“That is something I’m really proud of the team [for],” he said. “When you are defending a target like that, it can get over in either 13-14 overs or you drag it till the last ball. I think that’s what we did today. We dragged it till the last over. The guys kept fighting and it was important for us to keep taking wickets at the same time as well. So you’ve got to plan and see how you’re going to take those wickets and I thought the planning we did – whatever we spoke of – the guys came and executed it.”
Rishabh Pant scored a quickfire 24 off 12 balls•Associated Press
Rohit backs batters to maintain the ‘same intensity and same intent’
In the first T20I on a two-paced Tarouba surface , India racked up 190 for 6 despite the steady fall of wickets. In the second game, on a similarly challenging surface in Basseterre, India stayed true to their attacking batting approach, but it backfired this time as they were bowled out for 138 with two balls unused in their innings. Rohit insisted that Monday’s batting failure wasn’t a cause for concern and that India would not veer away from their gung-ho approach.
“Really, really happy with how the bowlers bowled, but of course, there are certain things in our batting that we really need to look at,” Rohit said. “But again, I will say that as well: we will continue to bat in that kind of fashion because we want to achieve something. Unless you try and do it, you will not achieve.
“So, I think, one odd result here and there, we shouldn’t panic. It’s just about giving those guys that clarity, and after one loss we are not trying to change anything. We will keep [up] the same intensity and same intent with the bat.”
India lost three wickets in the powerplay after being sent into bat, but they still hit 56 runs during this phase. Soon after, Rishabh Pant dashed out of the crease against left-arm fingerspinner Akeal Hosein, only to be caught at deep midwicket. Hardik Pandya, then regularly sent the ball in the air and holed out as well when he dared to hit against the wind and clear the bigger leg-side boundary. Ravindra Jadeja and Dinesh Karthik, too, picked out the fielders while looking for boundaries. Rohit admitted that India’s total was below par and hoped the batters would fare better in the next game, which will also be played at the same venue, and possibly the same pitch, on Tuesday.
“Firstly, there weren’t enough runs on the board for us,” he said. “We didn’t bat well, and I thought the pitch was playing quite nicely, but we didn’t apply ourselves. But that can happen. I’ve been mentioning it again and again that when you’re trying to achieve something or when you’re trying to do something as a batting group you’re not always going to succeed. So, [in] games like this you could understand what you could’ve done. So, we will try to learn from what mistakes we made today and try and see if we can correct those mistakes in the next game.”
Tags: Arshdeep Singh, Avesh Khan, India, India in West Indies, Rohit Sharma, West Indies, West Indies vs India