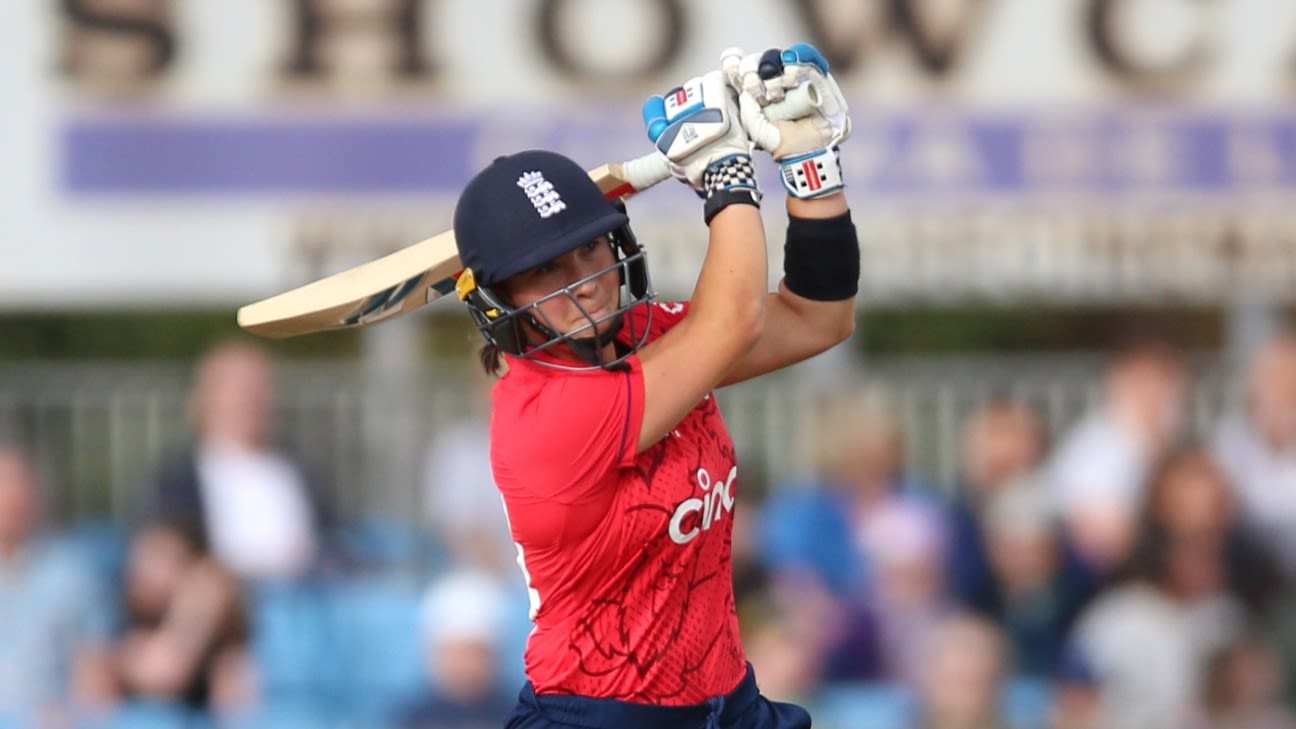 Overview
So how to beat Australia? As teams ponder this, they’re faced with two options: do more of the same but better, or shake things up a bit. When you’re struggling to get close, the latter eventually makes sense. England still have proven match-winners like Katherine Brunt, taking career-best figures at the age of 37, and Sophie Ecclestone, just 23 but so masterful with her left-arm spin and handy with the bat she is a mainstay in the side. Then there’s the ever-reliable allrounder Nat Sciver and calm-as-you-like Heather Knight, the England captain who has been managing a hip problem over the past week and whose fitness could prove key for the home team. But many of England’s bold new moves have paid off too. Sophia Dunkley has impressed after the surprise omission of regular opener Tammy Beaumont, 20-year-old quick Issy Wong has effortlessly added fire and pace, and teenage left-arm seamer Freya Kemp grabbed two wickets on debut.
Related
Squad
Heather Knight (capt), Maia Bouchier, Katherine Brunt, Alice Capsey, Kate Cross, Freya Davies, Sophia Dunkley, Sophie Ecclestone, Sarah Glenn, Amy Jones, Freya Kemp, Nat Sciver, Bryony Smith, Issy Wong, Danni Wyatt
Recent form
England staged a remarkable turnaround at the ODI World Cup; after a three-game losing streak that threatened to derail their campaign they won the next five to reach the final, where they lost to you-know-who. After sweeping three ODIs against South Africa, the hosts revamped their squad and defeated the same opponents by the same margin.
Player to watch
Alice Capsey’s international debut less than a week ago was a long-awaited one, and she’s only 17! Having burst onto the scene in last year’s Hundred, England appeared to follow Knight’s advice for a softly, softly approach towards introducing players so young. But she earned her senior call-up for the T20Is against South Africa and England showed they’re no longer afraid to throw her in at the deep end, promoting her to No.3 in the final game when Dunkley fell first ball. Capsey smashed 25 off 17 balls including four consecutive fours. She took a wicket with her second ball on debut in the previous game, so now that the allrounder’s induction is complete, it will be fascinating to see what’s next.
By Valkerie Baynes
Can Lea Tahuhu find a second wind in her career?•ICC/Getty Images

Overview
Irrespective of how their form has been, their big-tournament temperament has been suspect for a while. CWG 2022 is another opportunity to set things right, especially after the disappointment of the 50-over World Cup at home where they failed to make the semi-finals. New Zealand Cricket (NZC) hasn’t let that dampen the optimism, though, by announcing late last month a landmark deal that brings the women’s pay at par with the men across formats and age-groups. The impact of this could be seen long-term, when it transcends to a wider pool of players, with lesser attrition and 100% professionalism. For all the revolution off the field, they’ll also want on-field results to dictate the change. New Zealand are in a group of death, with one of them, England or South Africa likely to miss out. That is, of course, assuming Sri Lanka don’t pull off massive upsets.
Squad

Sophie Devine (capt), Suzie Bates, Eden Carson, Izzy Gaze, Claudia Green, Maddy Green, Brooke Halliday, Hayley Jensen, Fran Jonas, Amelia Kerr, Rosemary Mair, Jess McFadyen, Georgia Plimmer, Hannah Rowe, Lea Tahuhu
Recent form
New Zealand haven’t played since their World Cup exit. They’ve had enough time to reboot and regroup ahead of what promises to be a busy next seven months leading into the 2022 T20 World Cup in South Africa. Some of the players did feature in the FairBreak Invitational Tournament in Dubai in May.
Player to watch
Left out of the original squad for the Games, fast bowler Lea Tahuhu is back after Jess Kerr and Lauren Down withdrew. The joint highest wicket-taker for New Zealand in ODIs, Tahuhu will be itching to prove a point after also being ignored from the annual central contracts for 2022-23. Tahuhu didn’t have a poor World Cup campaign by any means, picking up 10 wickets in six games at an average of 20.80. New Zealand’s inability to make the semi-finals coupled with a vision to move forward may have forced the selectors to look beyond her. The late call-up now could be a tonic her career needs for possibly a second wind.
By Shashank Kishore
South Africa need more of Laura Wolvaardt’s red-hot form•Cricket Ireland/Keniry Photography

Overview
South Africa have gone from being considered one of the favourites in big tournaments to freefall against England. The retirement of opening batter Lizelle Lee and non-availability of regular captain Dane van Niekerk, who has not recovered from ankle surgery in time, and Marizanne Kapp, who returned home for family reasons, has robbed them of much-needed experience and fast-forwarded their generational change. Their batting, in particular, lacks the intensity and aggression to keep up with T20 pace and the absence of a match-winning spinner is a concern. In a group with England and New Zealand, they may find it tough to reach the knockouts.
Squad

South Africa won three out of four series after the last T20 World Cup (and drew the fourth with West Indies) including beating Ireland 2-1 in June. But they come into the Games on the back off losing six white-ball matches to England this summer, not to mention their ODI World Cup semi-final.
Player to watch

Laura Wolvaardt is the batter with the biggest reputation and is enjoying a good year. After five fifties at the ODI World Cup, she was the seventh leading run-scorer in the Fairbreak tournament, and reached a half-century three times in six white-ball innings against England. She has adjusted well to batting at No. 4 in the shortest format and prefers batting outside the powerplay with the field spread.
By Firdose Moonda
Can Nilakshi de Silva help Sri Lanka to punch above their weight?•Sri Lanka Cricket

Overview
Since Sri Lanka’s group-stage exit in the Women’s T20 World Cup in 2020, Chamari Athapaththu has played 20 T20s including seven in the FairBreak Invitational Tournament where she scored a whopping 313 runs at a strike rate of 139.11 and an average over 52. Her gigs also included the Women’s Big Bash League and the Women’s T20 Challenge of 2020.
But Sri Lanka have played just ten T20Is since the global event in Australia – only better than Bangladesh’s four among Full Members – which have included the Women’s World Cup Qualifier that had to be called off midway, and the Commonwealth Games Qualifier that they cruised through.
It will not be too out of place to say that Sri Lanka are one of the underdogs of the Commonwealth Games. Alongside them in Group B are England, New Zealand and South Africa, against whom they have won a grand total of three T20Is. And once again, it will be up to Athapaththu to lead the way with a squad that has a lot of familiar and a couple of new faces.
Squad
Chamari Athapaththu (capt), Hasini Perera, Harshitha Samarawickrama, Vishmi Gunaratne, Malsha Shehani, Nilakshi de Silva, Kavisha Dilhari, Ama Kanchana, Achini Kulasuriya, Inoka Ranaweera, Udeshika Prabodhani, Sugandika Kumari, Rashmi Silva, Oshadi Ranasinghe Anushka Sanjeewani
Recent form

Sri Lanka have been on a losing spree after sealing the lone spot in the CWG Qualifier in January 2022. They lost 3-0 to Pakistan in Karachi before going down 2-1 against India at home.
Player to watch
Undoubtedly, most of Sri Lanka’s fortunes in the competition will hinge on how Athapaththu performs. But with 194 runs in nine innings at a strike rate of over 110 in T20Is in 2022, Nilakshi de Silva could be a key component of the Sri Lanka middle order. During the CWG Qualifier, she added an unbeaten 87 with Harshitha Samarawickrama – the highest fourth-wicket T20I partnership for Sri Lanka – en route to an unbeaten 49 that helped them beat Malaysia. Even against India at home earlier this month, a 77-run stand with Athapaththu helped Sri Lanka to their only win of the series.
By S Sudarshanan
Tags: Alice Capsey, Commonwealth Games Women's Cricket Competition, Laura Wolvaardt, Lea Tahuhu, Nilakshi de Silva