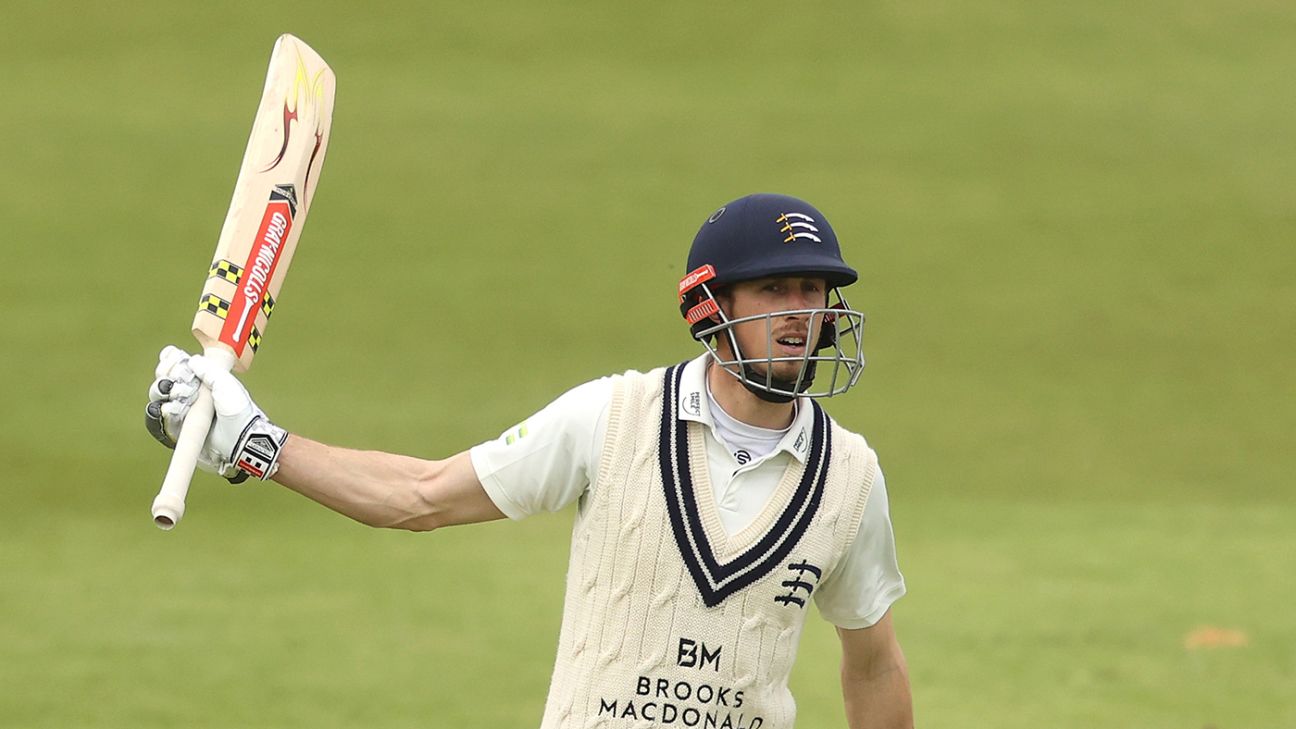 Middlesex 417 for 7 (Simpson 132*) trail Durham 421 for 7 dec (Jones 206, Bedingham 62, Borthwick 55, Roland-Jones 4-67) by four runs
John Simpson defied Durham with a brilliant century to steer Middlesex to near parity on day three of the LV= Insurance County Championship Division Two clash at Seat Unique Riverside.
The 34-year-old continued his impressive Championship form, scoring an unbeaten hundred to guide the visitors out of potential trouble at 201 for five. Simpson was dropped on 33, and duly capitalised with his third ton of the season, and was ably supported by the lower order after inroads from Stanley McAlindon and Chris Rushworth had threatened to allow Durham to take control.
Middlesex ended the day on 417 for 7 at the close, trailing the home side’s first-innings total by four runs with Simpson positioned on 132 and Tom Helm on 43 ahead of the final day.
Durham began the day in miserly fashion, bowling six maidens on the bounce before Middlesex finally got off the mark as Mark Stoneman worked the ball off his legs. There was no respite from the Durham bowlers in the opening 45 minutes, conceding only three runs. Frustration eventually cost Stoneman his wicket, cutting a wide ball from Ben Raine into the hands of Tom Mackintosh.
Middlesex continued to struggle amid tight bowling from the hosts and McAlindon kept up the pressure on Sam Robson and Steve Eskinazi. The youngster found Robson’s outside edge and Eskinazi then presented Nic Maddinson with a simple catch at cover for 18, reducing the visitors to 72 for 3. Pieter Malan and Max Holden steered the visitors into lunch without further damage, although the morning session was not an overly productive one for Middlesex adding only 46 for the cost of three wickets.
Malan seemed poised for a substantial knock, but he gave his wicket away playing a loose pull shot straight to Maddinson at square leg, ending a stand of fifty for the fourth wicket. Holden and Simpson took advantage of the softening ball and the flat wicket at the Riverside, mustering quick runs in the afternoon session.
There were few chances, but Borthwick spurned an opening when he put down Simpson for 33 off his own bowling. The Durham skipper returned to prise out Holden for 47 to halt the partnership for the fifth wicket on 79, although Simpson made the most of his life after passing fifty. Luke Hollman looked extremely fluent in the middle with four blistering strikes to the fence, but he fell on the stroke of lunch to the new ball and Potts, losing his off stump for 25.
Toby Roland-Jones provided a more than useful cameo with a 34-ball innings of 35 to push the Middlesex score beyond 300 before he became Rushworth’s 599th first-class victim. Sensing that he was running out of partners, Simpson pressed on with his innings and reached his third century of the campaign from 138 balls, striking Raine through the covers to the boundary.
Simpson and Tom Helm made a surge in an attempt to bring up maximum batting points for the visitors, but fell narrowly short. The two players reached their century stand for the eighth wicket as the Durham bowlers toiled late in the day, with the contest seemingly heading towards a draw at Chester-le-Street.
Tags: County Championship Division Two, Durham, Durham vs Middlesex, John Simpson, Middlesex