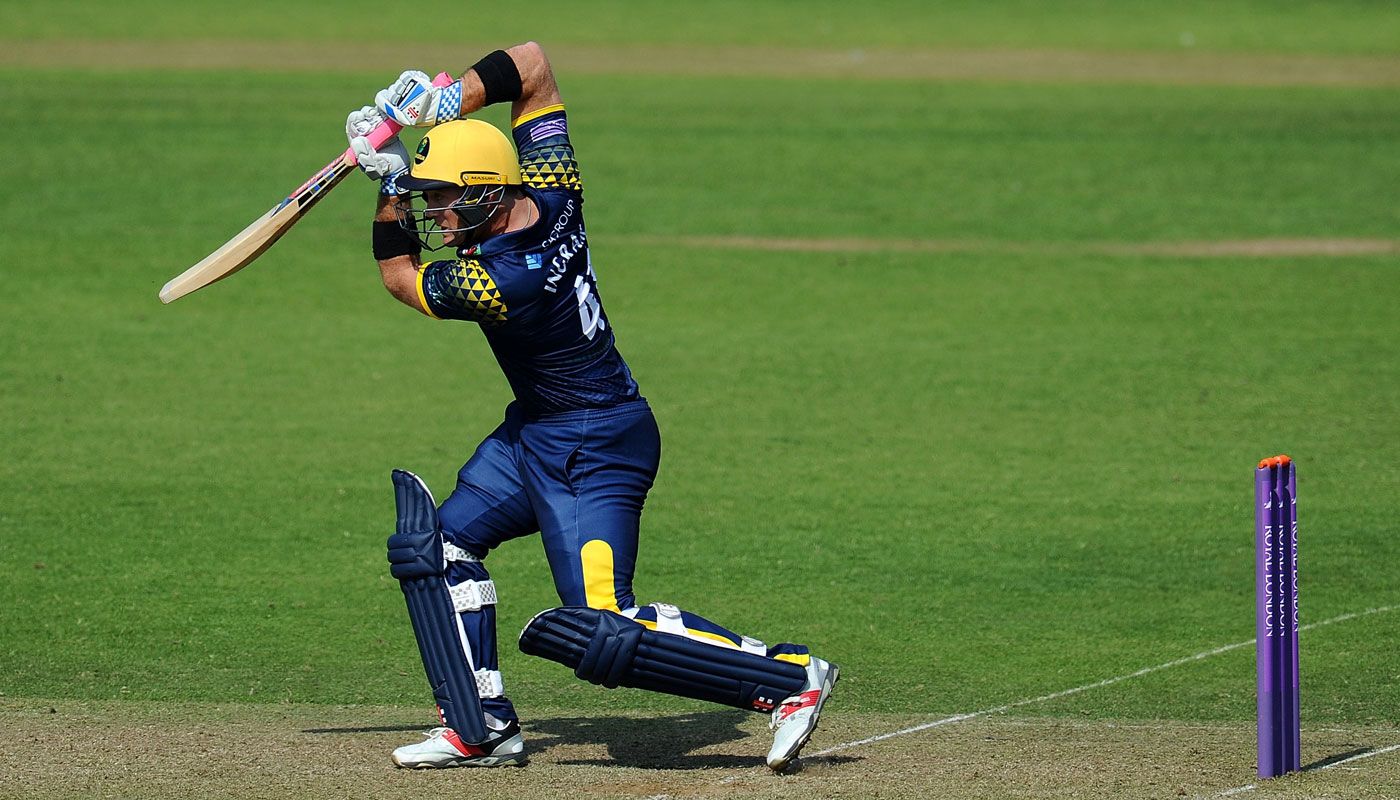 Glamorgan 308 for 7 (Ingram 155, Cullen 80*) beat Kent 304 for 8 (Evison 109, Blake 66, Robinson 50) by three wickets
Career best one-day scores for Colin Ingram and Tom Cullen, in a record sixth-wicket stand for Glamorgan of 186, sparked a remarkable recovery which took the defending champions to their second win in the Royal London Cup.
South African Ingram scored 155 off 148 balls, the joint fifth-highest List A innings for Glamorgan, while Cullen ended unbeaten on 80 off 77 balls after the pair came together with the Welsh county wobbling on 107 for 5 against Kent Spitfires’ imposing total of 304 for 8.
Ingram was the dominant partner, but Cullen’s contribution was also vital, as Glamorgan remain top of Group B of the 50-over competition.
Kent opener Joey Evison did not deserve to be on the losing side after his century in the first innings, the fourth time he has played Glamorgan this season, for three different counties – Nottinghamshire and Leicestershire as well as Kent, with a previous high score of 12 in those encounters.
Glamorgan asked Kent to bat first and got the perfect start when Ben Compton was caught behind third ball of the innings off the bowling of James Weighill. However Ollie Robinson joined Evison and the pair kept the scoreboard ticking over at around a run a ball until Robinson was out just after reaching his 50.
Alex Blake continued to provide Evison with good support and the pair put on a century partnership before falling in quick succession. At that stage Kent would have been eyeing a total of up to 350, but with Dan Douthwaite the pick of the Glamorgan bowlers the home side were able to peg the visitors back to the point they were grateful to creep over the 300 mark.
Douthwaite finished with figures of 2 for 43 off his 10 overs, Weighell also picking up a pair of wickets, as did Ingram with his legspin. George Linde’s 27 not out at the end of the innings ensured they reached 304 for 8.
It was still an imposing total and Glamorgan needed a good start. Unfortunately for them they did not get it with opener Sam Northeast falling for a goldenduck just 11 days after he scored a quadruple-century in the County Championship. That brought Ingram to the crease and he seemed to be facing a different bowling attack to his team-mates, regularly finding the boundary without taking any major risks.
It was not the same at the other end as batters came and went, although skipper Kiran Carlson offered some resistance with his 28.
Ingram was caught off a free hit following a Hamidullah Qadri no-ball on 55, before finally departing for 155 with 12 needed for victory. Cullen remained until the end to see his team over the line.
Tags: Colin Ingram, Glamorgan, Joey Evison, Kent, Kent vs Glamorgan, Royal London One-Day Cup, Tom Cullen