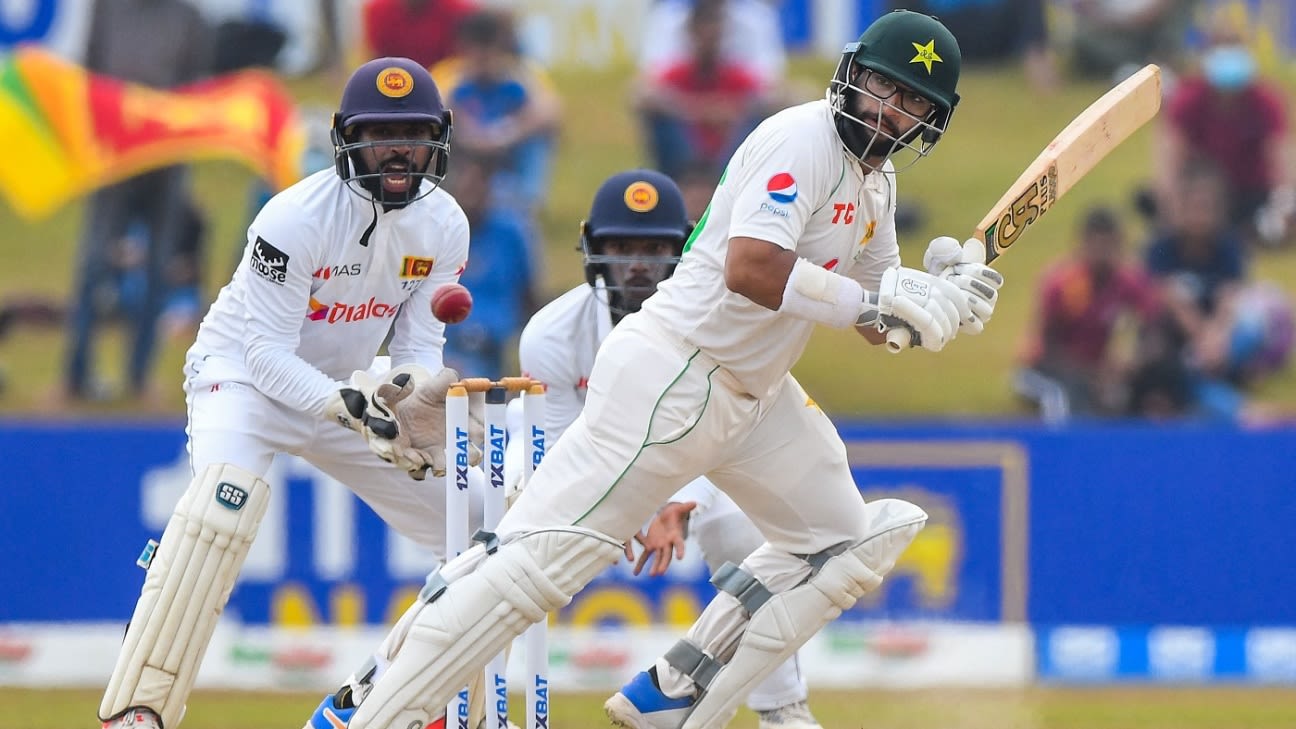 In the Karachi Test in March earlier this year, Pakistan had been set a target of 506 for victory. Against an Australian attack featuring the likes of Nathan Lyon, Pat Cummins, and Mitchell Starc, Pakistan hadn’t been too far from achieving that total, finishing with 443 for 7 on the final day as the game ended in a draw.
Abdullah Shafique and Babar Azam had put on a third-wicket partnership worth 228. Babar and Mohammad Rizwan then got involved in a century stand. Rizwan struck a ton himself, while Babar headlined with 196.
With that fourth innings on their recent record, as well as the one from last week where Pakistan had successfully chased down 342, Pakistan know they can put up big runs in the last innings, batting coach Mohammad Yousuf said.
Related
A victory push in this match seems unlikely. They still have 419 runs to get, and a maximum of 98 overs to get them in, and even that is only if bad light and rain stay away. The last two evening sessions on the third and fourth days were severely curtailed by bad light. But then, Pakistan are 1-0 up in the series and have the confidence of doing well in fourth-innings chases lately.
“We have done it in the past against Australia in Karachi,” Yousuf said. “I think the same target we needed to get in the same amount of time maybe, and Babar played an excellent innings of 196. Shafique got 96 and Rizwan got a hundred and it was a very good game. The way Babar and Imam-ul-Haq are playing, it will be an interesting day tomorrow.
“We will see in the first session how we go, and if we do well, we will try to chase the total. Imam and Babar have played very good cricket in the last session, and I hope they bat the whole day tomorrow as well.”
Yousuf was very clear on how Pakistan will approach the final day: the batters should play in whichever way comes naturally. A chase of 508 might seem far-fetched, and teams would have traditionally tried to block Sri Lanka out for a draw from this position. However, both Imam and Babar played their shots and sought out scoring opportunities. Shafique also perished attempting a big shot only to be caught at mid-off for 16. Pakistan went to stumps with Imam unbeaten on 46, and Babar on 26.
“Never tell anyone to go against their strengths and their natural game,” Yousuf said. “You play your own game. I did that in my days. Even now, head coach Saqlain Mushtaq, me, and the support staff try our best to keep the players mentally free and motivate them to do well.
“Babar and Imam are playing to their strengths, and I feel if they play in the same manner, we will try to go for the target, though it’s a bit too early to say anything. We played in a similar fashion against Australia, and a point came in that chase that the head coach called a meeting to discuss that we will go for a win. But unfortunately, Babar got out on 196, and we had to settle for a draw.”
What might encourage Pakistan is that the pitch in Galle is not as worn at the end of the fourth day as it often is at this venue. Although, on the flipside, previous Pakistan teams have not needed a bone-dry Galle pitch to collapse on.
“I think once you get in, you get used to it,” Yousuf said of the surface “Early on it’s a bit of a challenge, but once you are set, it’s a better batting wicket.”
Tags: Babar Azam, ICC World Test Championship, Imam-ul-Haq, Mohammad Yousuf, Pakistan, Pakistan tour in Sri Lanka, Sri Lanka, Sri Lanka vs Pakistan