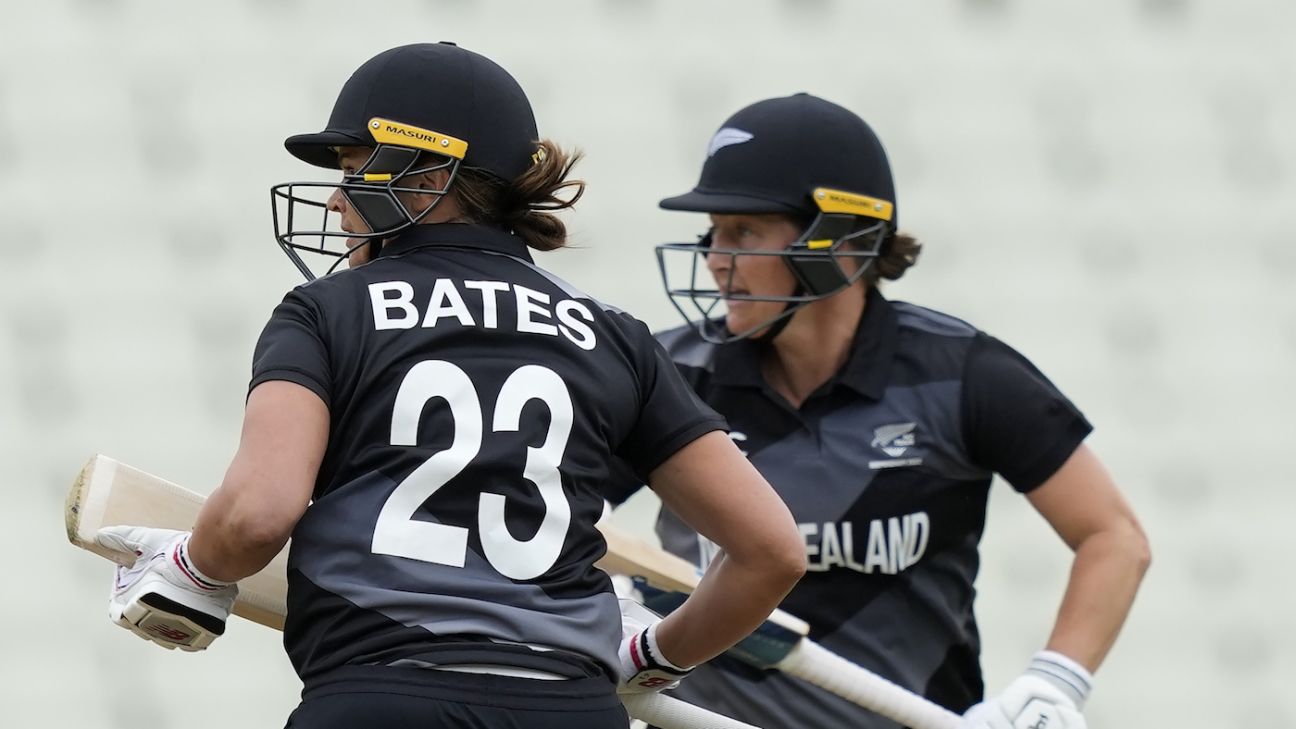 Suzie Bates and Sophie Devine believe they still have a big role to play in overseeing a period of “massive change” for New Zealand as they build for the future, insisting there’s still plenty of “fire in the belly” and that the Commonwealth Games isn’t pencilled in as their swansong.
It’s not often a major tournament represents a new beginning, rather than the end of a cycle, but with Birmingham 2022 coming less than five months after the ODI World Cup, teams have had a fresh look as focus shifts towards next year’s T20 World Cup in South Africa.
New Zealand perhaps have epitomised that even more than most. A shock contract snub for Amy Satterthwaite led to her international retirement, while her wife, Lea Tahuhu was also omitted. Their XI for their Commonwealth Games opener against South Africa featured three debutants – Izzy Gaze, an 18-year-old wicketkeeper taking on the gloves from the retired Katey Martin, 20-year-old offspinner Eden Carson, and 18-year-old left-arm spinner Fran Jonas.
Related
But it was the experienced heads that saw New Zealand to victory. Bates blitzed an unbeaten 91 at the top of the order, her first T20I half-century since 2019, while Devine put on an all-round show, scoring 48 with the bat before taking 3 for 37 to become the first New Zealand woman to reach 100 T20I wickets. Devine laughed off suggestions the end is nigh for her international career with a deadpan response.
“Are you telling me I should retire? I’m just joking,” she said following the match. “I wanted to get to the home World Cup earlier this year, and I was going to reassess [after], but I certainly have got a lot of fire in the belly still.
“And especially with some younger girls still around, I feel like I’ve got a role to play in helping bring them through and helping us transition in this next phase for New Zealand women’s cricket.”
Devine’s T20I experience goes all the way back to 2006 when she debuted as a 17-year-old in what was the White Ferns’ second match in the format. Now, 32 and captain of the side, she is proud to oversee the integration of a new generation of teenagers into the setup.
“They certainly make me feel my age, which they sort of remind me on the daily but it’s just been really nice,” Devine said of the debutants. “I think the way that they’ve come into the group, they fit in so well. I think it’s credit to the environment that we’ve created within the White Ferns that players like that can come in doesn’t matter if they’re young or old and they can feel comfortable and can perform well.”
Suzie Bates brought out a number of innovative shots during the course of her 91 not out•Getty Images
Bates echoed her captain’s sentiments, adding that playing with the likes of Amelia Kerr is helping to inspire the senior players to keep at the top of the game.
“We love getting together in the nets and in the middle,” Bates said of her relationship with Kerr. “And look, she inspires me to be a better player. She’s world-class, and it’s just so great having someone as good as her around the group. We know each other’s games, and we talked about what shots we were going to play. She’s a big dreamer and talks about at training how we’re going to be on the podium together.”
As well as the young players keeping them on their toes, the surprise omissions of Satterthwaite and Tahuhu from the central contract list “sent some shockwaves through the whole team,” according to Bates, who is more pragmatic about how long she’s got left in the team.
“For me personally, it just made me appreciate the game even more and also think about what I’m going to do after the game because you never know when it’s your time. I’ve always loved playing sport and until someone probably taps me on the shoulder and tells me it’s my time I’ll keep getting out there because you’re a long time retired. But yeah, it’s definitely made me well aware of my role in this group now as a senior player and also making sure I keep contributing.”
For most cricketers at the Games, it’s their first experience of being part of a multi-sport event. Devine likened it to “being an only child for so long, and then you realise that you’ve got an adopted brother and sister or half-sister or whatever, and you have to share the limelight a little bit more.”
But for Bates, this isn’t her first rodeo – she was part of New Zealand’s ‘Tall Ferns’ basketball team that competed at the 2008 Beijing Olympic Games. She reflected on how she’s matured since, approaching the Games with a much cooler head than she did as a teen.
“I just remember seeing all the athletes from all over the world and just being starstruck really, wanting to get my eye on the USA basketball team and trying to get some photos of people like Roger Federer as well. Now I’m a bit older, played a bit cooler, and it’s just about making sure this team enjoys those parts of it but then making sure we perform on the field which is what we’re here to do.”

“It’d be huge, not only for women’s cricket but for men’s cricket as well”
Suzie Bates on cricket’s inclusion in the Olympics

Basketball 3×3 is making its debut at the Games alongside Women’s T20, and Bates is hoping to use her status as a past player to make sure she gets a ticket to check it out in her downtime.
“I think we have three tickets tonight, the team plays just down the road from us in town. So I feel like it would only be fair if I got one of those tickets.”
And as a former Olympian, Bates of course has high hopes for cricket’s future inclusion in the Olympic Games and the impact it could have in growing the game globally.
“It’d be huge, not only for women’s cricket but for men’s cricket as well. If we can reach that global audience, the game is only going to grow further and further.
“You see leagues popping up all over the world and places you perhaps never thought it would and especially for the women’s game, the more rich we can get and the more bums we get on seats, the more people watching appreciate in the sport, it’s only going to grow better. So this is another vehicle for us, and we’re inspired to make sure that we do it right.”
With the 2028 Games targeted for a possible return of cricket to the Olympics, it may be a step too far for Bates and Devine. But as a mentor, Bates feels energised by their youth and is excited for the future opportunities ahead for them to play in front of an ever-growing audience for the women’s game.
“I actually feel young again when you’ve got those baby-faced kids running around,” Bates said. “The debuts today, just the smiles on their faces, and for that to be their debut, that atmosphere, it probably took ten years for us to get a crowd like that when I was playing. So it’s just brilliant. And yeah, I just can’t wait to be around the group and help those players and set them up for future success.”
Tags: Commonwealth Games Women's Cricket Competition, New Zealand Women, NZ Women vs SA Women, Sophie Devine, Suzie Bates