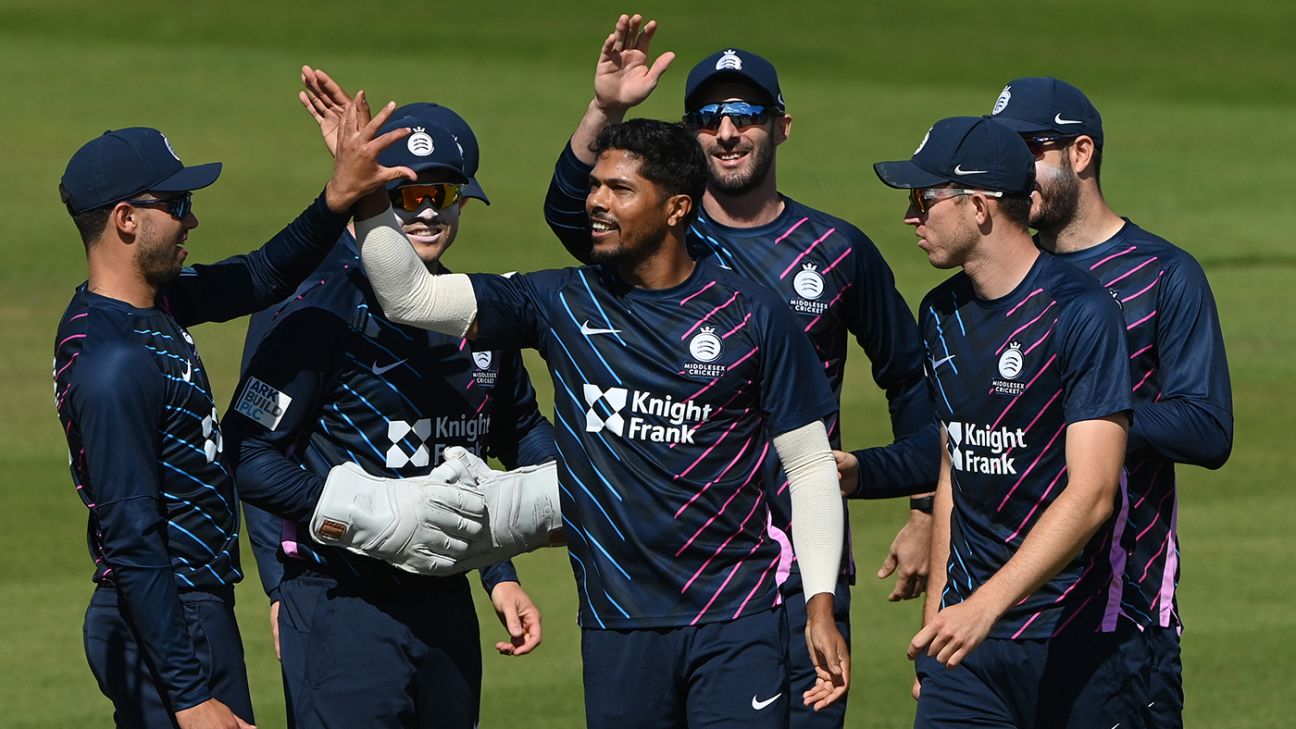 Middlesex got off the mark in their Royal London Cup campaign by easing past Durham courtesy of a career-best 146 from Stephen Eskinazi and a five-wicket haul from Umesh Yadav at Seat Unique Riverside.
Umesh starred with the ball for the visitors claiming figures of five for 33, dismantling the Durham top order before returning to dismiss the hosts for 268 after Michael Jones had led a recovery with his maiden List A ton.
Middlesex were clinical with the bat led by Eskinazi’s unbeaten ton at the top of the order, controlling the chase with support from Mark Stoneman and Sam Robson, who each made half-centuries. Two stands of 100+ highlighted the ease of the Middlesex victory, knocking off the target with 50 balls to spare.
Durham would have been hopeful for a bright start to bounce back from their thrashing at the hands of Surrey at Gosforth on Thursday, winning the toss and electing to bat in the sunshine at the Riverside.
However, Graham Clark was cleaned up by Umesh from the second ball of the innings. Umesh then prised out Scott Borthwick lbw before Nic Maddinson was dismissed in a bizarre manner as the ball clipped the back of his bat from an attempted pull and ended up in the grasp of Sam Robson at first slip.
After being reduced to 16 for 3, Durham required a stand from Alex Lees and Jones to rebuild the innings. Lees responded with a fine knock off 66. The left-hander was measured his defence before settling into a rhythm, bringing up his half-century with a deft reverse-sweep from 73 balls. Lees and Jones extended their partnership to 109 before the England Test opener got a grubber from Luke Hollman to fall lbw for 66.
Related
Jones took the initiative to post his maiden List A fifty for Durham, reaching the milestone in style with a sublime drive down the ground off Hollman. The Scotland international freed his arms against Toby Greatwood, clearing the rope twice in the 33rd over with off drives to increase the Durham run rate.
Jones notched a deserved century from 107 deliveries, and added further blows in a partnership with 89 with Luke Doneathy. However, hopes of a score of 300 were dashed, Hollman removed Jones for 119 before Umesh cleaned up the tail to bowl out the home side for 268.
Ollie Gibson should have made a breakthrough in the second over of Middlesex’s chase, but Tom Mackintosh put down a routine chance behind the stumps. The visitors eased to fifty within 38 balls capitalising on Stoneman’s reprieve to whittle down the required rate below five per over. Stoneman poured on the agony for the hosts by easing his way to his half-century and was soon joined by Eskinazi, lofting Borthwick over the top to secure his fifty.
The openers broke a Middlesex record for the highest stand for the first wicket against Durham, but Gibson eventually got his reward and his first List A wicket to dismiss Stoneman for 62 and ending the partnership for 132. Despite the loss of Stoneman, Eskinazi continued to look at ease and dispatched the Durham attack to the fence, including a huge six over cow corner against Trevaskis.
The 28-year-old worked his way to his third List A hundred from just 99 balls before upping the ante to whittle down the victory target. Eskinazi and Robson punished the youthful Durham attack to all parts in the closing overs to ease over the line and register their first victory in the competition this term.
Tags: Durham, Durham vs Middlesex, Michael Jones, Middlesex, Royal London One-Day Cup, Stephen Eskinazi, Umesh Yadav