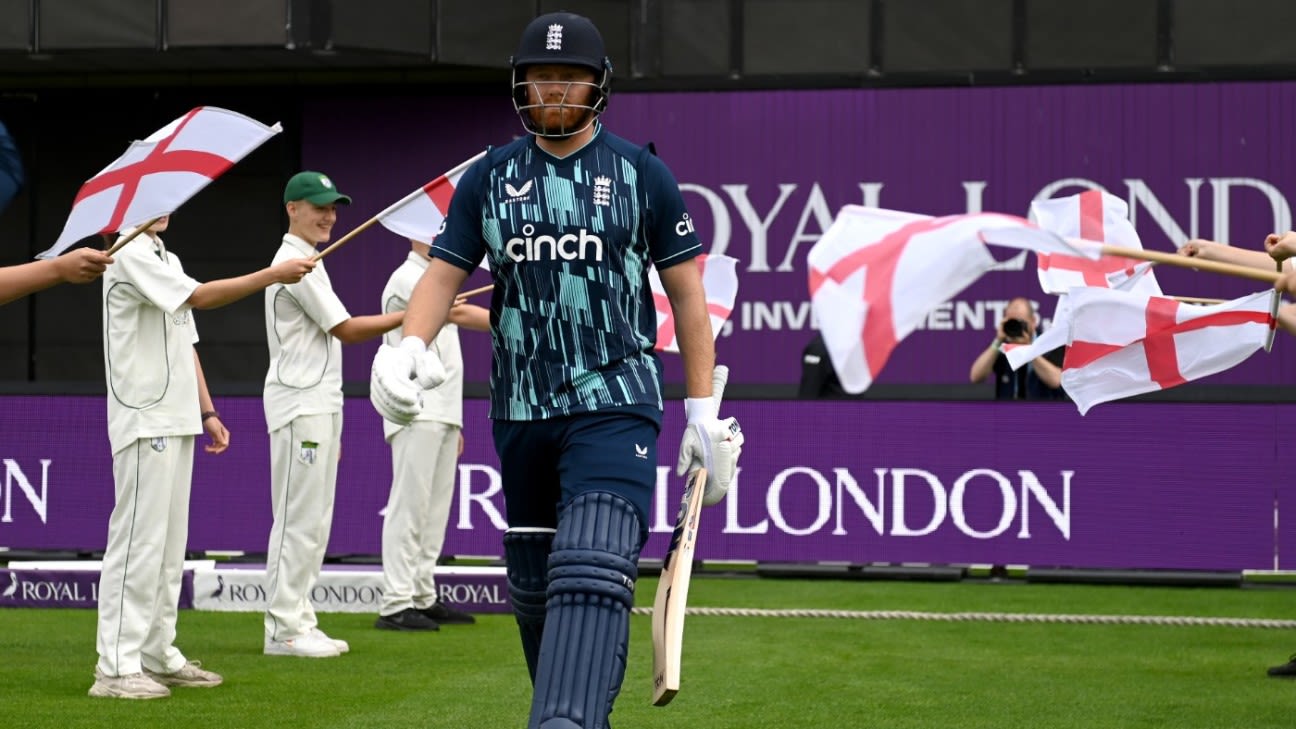 Jonny Bairstow has pulled out of the opening stages of the Hundred and will not play a part in this year’s competition*.
Bairstow had been due to play for Welsh Fire, and was expected to be available for the first two or three games – including Wednesday’s season opener against defending champions Southern Brave – before linking up with England’s Test squad to play South Africa. But, as revealed by ESPNcricinfo, he has pulled out to rest ahead of that series and a busy winter ahead.
“I’m really disappointed I won’t be part of the Hundred this year,” Bairstow said, after his absence was confirmed. “I loved it last year, but I’ve had a hectic few months with the schedule as it is and I really need to take a breather before the South Africa Test series. All the best to the Welsh Fire men and women – I’ll be cheering you on.”
England are due to tour Pakistan (twice), Australia (with bilateral series either side of the T20 World Cup), South Africa, New Zealand and Bangladesh this winter, and their touring commitments begin days after the final Test of the home summer against South Africa.
Bairstow’s decision is a significant blow to the Hundred ahead of the competition’s second season, following Ben Stokes’ withdrawal from the Northern Superchargers squad.
Related
England’s limited-overs players will be available for the full season of the Hundred but only a handful of Test players will take part, while others will be withdrawn to play for England Lions against South Africa in a four-day warm-up match in Canterbury.
The Hundred’s schedule allows centrally-contracted Test players to appear in two or three group games and the knockout stages, and the number of games for which they will be available should increase in 2023, when the competition has a three-week window in the English summer.
Bairstow’s schedule has been relentless since his Test recall and he has played more games for England across formats than anyone else since the start of 2021. He was rested from the T20I series against India but has played each of England’s nine games since.
A statement from Welsh Fire said: “We understand Jonny’s decision and wish him all the best. We can’t wait to get our Hundred campaign under way tomorrow night and then look forward to getting back in front of our own fans at Sophia Gardens on Sunday.”
Elsewhere, fast bowler Jamie Overton will miss the Hundred for the second season in a row after suffering injuries to his hand and foot during Surrey’s County Championship game against Warwickshire. Paul Walter, the Essex allrounder will replace Overton at Manchester Originals.
Tom Abell, Somerset’s captain, has been ruled out of his Birmingham Phoenix stint because of a hamstring injury, while Ollie Robinson (Originals) and Rory Burns (Oval Invincibles) have been released to play in the Royal London Cup for their counties.
*1830 BST – This story was updated after confirmation of Bairstow’s withdrawal
Tags: England, Jonny Bairstow, The Hundred Men's Competition, Welsh Fire (Men)