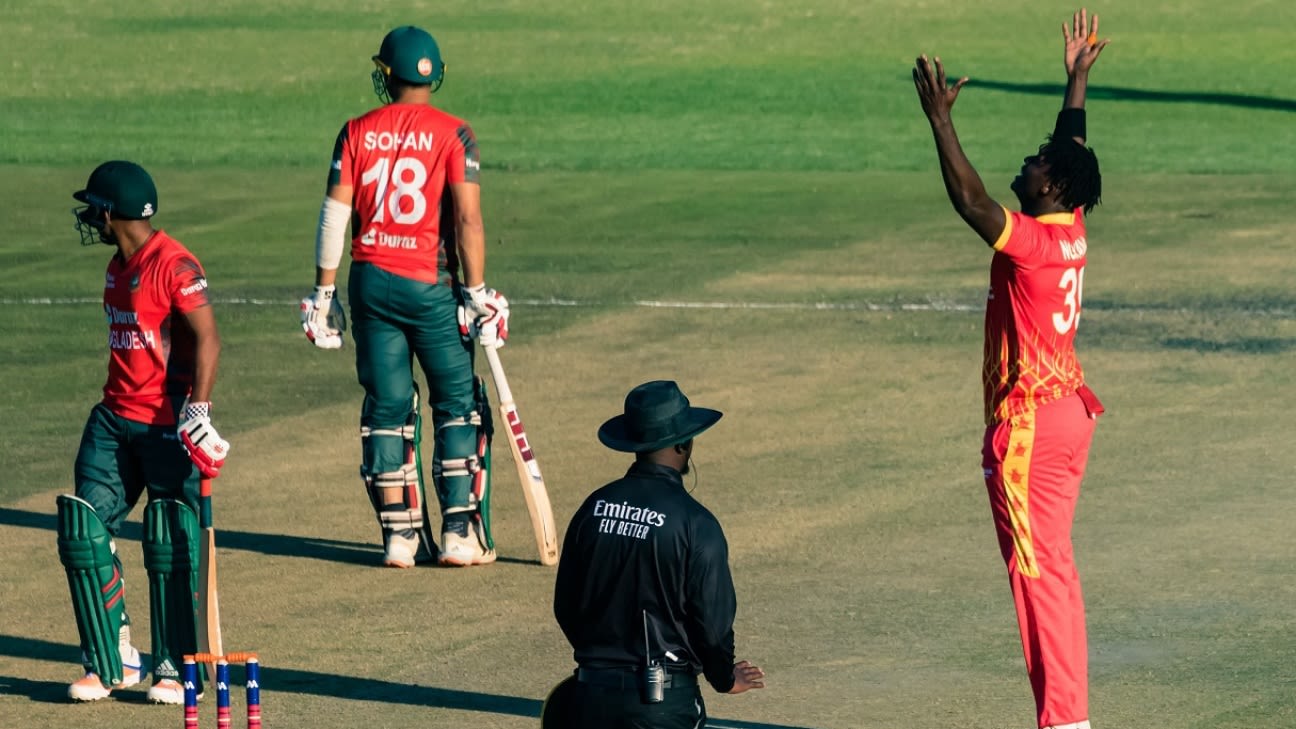 Khaled Mahmud, the Bangladesh team director, has called the side’s defeat to Zimbabwe in the three-match T20I series as “a disgrace”. Mahmud’s words are the first public reaction from any of the senior figures within the team management after the visitors lost their first ever T20I series against Zimbabwe.
Bangladesh lost the first game by 17 runs before bouncing back with a seven-wicket victory in the following game. In the decider, they went down by 10 runs. During that game, Zimbabwe were struggling at 67 for 6 in the 13th over. However, Ryan Burl’s 34 runs off a Nasum Ahmed over turned the tide the home side’s way, as he and Luke Jongwe added 79 runs in just 5.1 overs.
Related
Even so, Bangladesh would have backed themselves to chase down the 157-run target, especially against a Zimbabwe attack that was missing their most experienced fast bowlers. However, the visitors went 49 balls without hitting a boundary, and struck just one six throughout their innings.
Mahmud accused the Bangladesh batters of playing to secure their places, expressing his displeasure at their inability to go for big hits when the required rate was more than 10 an over.
“I am very disappointed, I didn’t expect to lose to Zimbabwe,” Mahmud said. “We are a better team than them. I would call it a disgrace. I won’t give any excuses. We should have won the T20I series. Losing was quite unusual. When we needed 10 or 12 runs an over, we were getting six or seven every over. Nobody even tried to hit a six. Everyone was playing for ones and twos. What was that? They batted like trying to protect their place, make enough runs so that they don’t lose their place.”
Mahmud said he was upset to not see any of the Bangladesh batters try and force the issue, a far cry from Burl and Jongwe, who looked to hit around even after Zimbabwe had lost six wickets.

“I am very disappointed, I didn’t expect to lose to Zimbabwe. We are a better team than them. I won’t give any excuses. We should have won the T20I series”

“When you are chasing 157, you can’t win a game by batting at 90 or 110 strike-rate. Someone had to go after the bowling. Look at their (Burl and Jongwe) strike-rate. They changed the complexion of the game. You can’t expect Litton Das to score every day. Whether it was Afif or Shanto, I didn’t see anyone batting aggressively. If you can’t pull a short ball for six, that’s going to be a problem.”
Mahmud said that the T20I squad contained the best available players in the country, and there wasn’t too much competition for places in the first place.
“Those selected have all performed well in domestic cricket, including Munim Shahriar and Parvez (Hossain Emon). If your best players don’t perform, there’s nothing you can do.
“The cricketers can tell you what they have to do. They have been getting opportunities for quite some time now. There’s not a lot of competition for places, so they should play with an open heart. I haven’t seen them playing that way.”
Bangladesh have won only two out of 11 T20Is since last year’s T20 World Cup, where they had lost all five of their Super 12s matches. They are scheduled to play at least six more T20Is before this year’s World Cup.
Tags: Bangladesh, Bangladesh in Zimbabwe, Khaled Mahmud