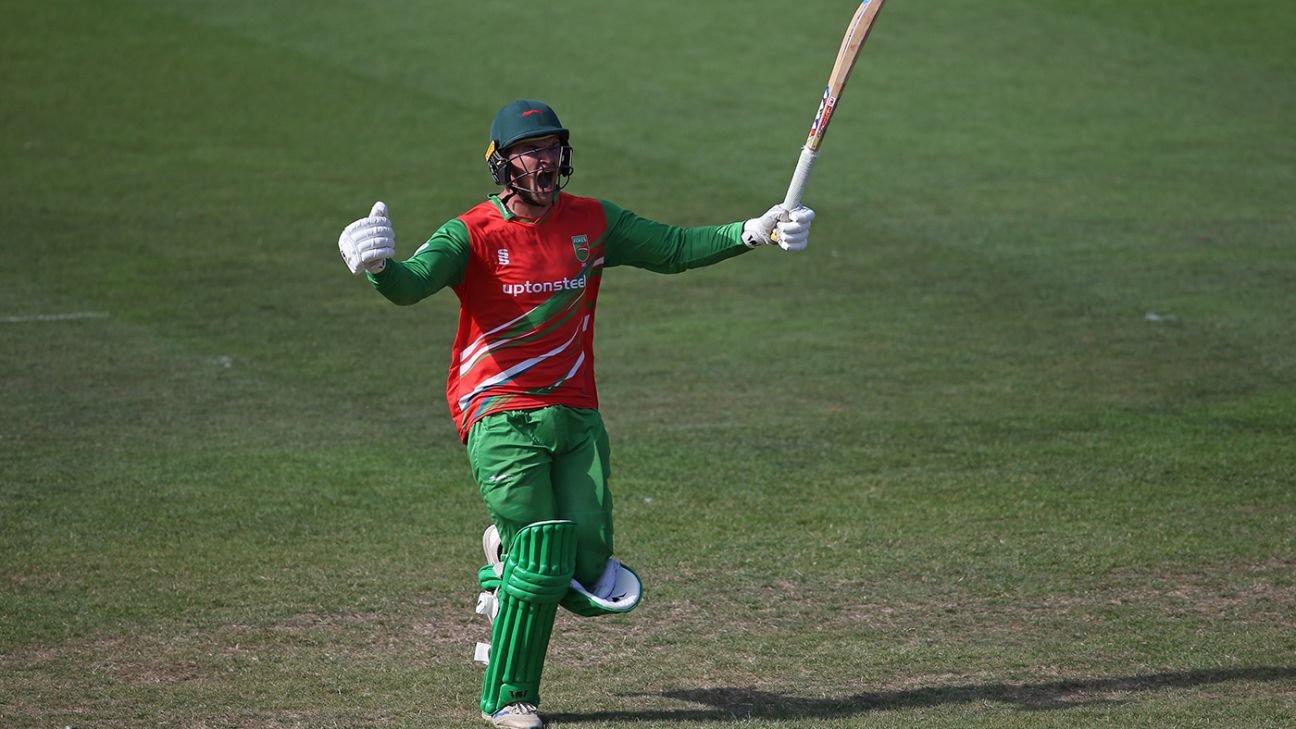 Leicestershire 248 for 3 (Welch 127*, Mulder 71*) beat Surrey 246 for 8 (Geddes 73, Hendricks 4-39) by seven wickets
Opener Nick Welch hit 127 not out from 125 balls and Wiaan Mulder cruised to an unbeaten 71 as Leicestershire kicked off their Royal London Cup Group A campaign with a comfortable seven-wicket victory against a youthful Surrey team at Guildford.
Welch and Mulder’s unbroken fourth wicket stand of 141 was a Leicestershire record against Surrey in List A cricket and the win came with a full ten overs to spare. There was a six and 16 fours in 24-year-old Welch’s career-best one-day innings, while Mulder clubbed two sixes and eight fours in his 65-ball knock.
A crowd of almost 3000 packed into Woodbridge Road saw Ben Geddes hit 73, Josh Blake 44 and Nico Reifer a responsible 45 not out, but Surrey’s 50-over total of 246 for 8 was never likely to be enough on such a fast-scoring ground.
Left-arm quick Beuran Hendricks, the game’s outstanding bowler, took 4 for 39 and nipped out both Ryan Patel and Cameron Steel in a five-over new ball burst of 2 for 14 before also claiming the wickets of Nick Kimber and Amar Virdi in the closing overs.
Leicestershire lost Rishi Patel for nought at the end of the second over, caught at point driving at a Tom Lawes outswinger, and Leicestershire were 107 for 3 Welch was joined by Mulder in their match-clinching stand.
Yousef Majid, an 18-year-old Cranleigh School pupil on his senior debut, took a wicket with his fifth ball and impressed throughout a seven-over spell costing 19 runs.
But an entirely uncapped Surrey side – seamer Matt Dunn, at 30, and 26-year-old Steel were the only two players over the age of 24 in their line-up – was outgunned with both bat and ball after the Foxes had won the toss and opted to bowl.
Surrey, who have lost 13 players to the Hundred – the most of any county – gave List A debuts to four players – 19-year old Lawes, Majid, left-hander Blake and off spinner Virdi.
Offspinner Nathan Bowley, in contrast, was Leicestershire’s only List A debutant and they have only four players representing Hundred teams this month.
Patel’s dismissal for a second-ball duck, leg-before to Hendricks, was a significant early blow to Surrey but 21-year old Geddes, skippering the county for the first time, was then joined in a spirited third-wicket stand of 105 by Blake.
Arron Lilley had Blake leg-before, sweeping, in the 28th over and Geddes – who earlier pulled medium pacer Tom Scriven for six – had just hit the returning Chris Wright imperiously through extra cover for four, his ninth, when he attempted to pull the next ball and skied a catch to long-on.
Lawes made 21 before edging Scriven behind and Kimber’s 23-ball 27 helped to accelerate the scoring rate until Hendricks bowled him. Reifer’s 48-ball effort contained only three fours, but the 21-year old at least gave his team something to bowl at.
Louis Kimber’s 22 steadied Leicestershire’s reply, after Patel’s departure, while Welch moved serenely to a 47-ball half-century with a mixture of powerful strokes – such as an uppercut six wide of third man off Lawes – and careful accumulation.
Kimber fell to Conor McKerr and Lewis Hill also kept Welch company for a while before Majid bowled him for 17 through an attempted sweep. Mulder, however, never looked in any trouble against seam or spin and, after scoring his first fifty or so runs at a run a ball, he slog-swept Steel’s legspin out of the ground for six as victory beckoned.
Welch and Mulder’s partnership beat the 49-year-old mark of 93 put on by John Steele and Barry Dudleston in a John Player League match at Grace Road in 1973.
Hill, Leicestershire’s captain, said before the tournament: “Our aim is to win this competition and I believe we’ve got a serious chance of doing just that.” They have, at least, made an emphatic start to that ambition.
Tags: Leicestershire, Nick Welch, Royal London One-Day Cup, Surrey, Surrey vs Leics, Wiaan Mulder