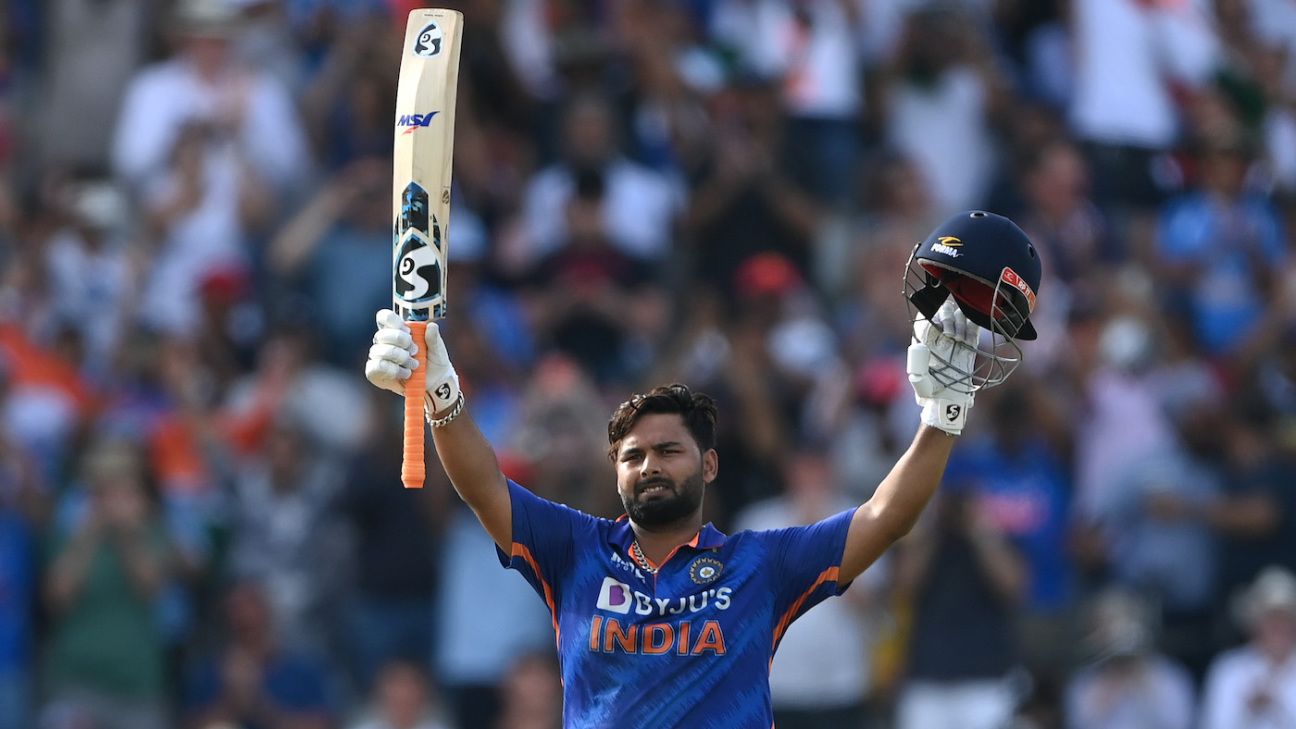 An innings he says he will remember forever. An innings we on the outside will never forget. That was Rishabh Pant’s maiden ODI century, where he managed to not only resuscitate India after their top-order failure, but also helped the visitors sprint to the target in record time.
Everyone who was at Old Trafford called it as an incredibly special innings. Importantly, an innings of maturity. The praises flowed from India captain Rohit Sharma, from his England counterpart Jos Buttler and India allrounder Hardik Pandya, who shared a 133-run fifth-wicket partnership with Pant. Most importantly, even Pant agreed it was a memorable effort.
“Hopefully I’ll remember for the rest of my life,” Pant told Sky Sports at the post-match presentation. “But at the same time when I was in, I was not thinking anything, I was just trying to focus on one ball at a time which pays off well for our team.”
Pant walked in at the fall of Rohit’s in the fifth over when India were 21 for 2. That soon became 38 for 3 after Virat Kohli’s run of troubled form continued. And once Suryakumar Yadav walked as soon as he had nicked at 72 for 4, the responsibility to take India to the finish line rested in the hands of Pant and Pandya.
This was the second time in a matter of three days that Pant found himself in the middle given the onerous task of reviving India’s fightback after a top-order collapse. At Lord’s, on Wednesday, Pant was in disbelief after his lame reply to a full toss was spooned directly to the fielder at mid-on. A duck to his name, Pant walked back head down.
On Sunday, though, Pant remained measured, composed barring that one rush-of-blood moment, when on 18, he charged Moeen Ali, but was beaten by an offbreak that spun away off the pitch but Buttler failed to latch onto the opportunity as Pant leapt back into the crease. But both Pant and Pandya embraced the challenge and steadily laid the foundation for a fightback.
Related
A repeat of Lord’s where India lost by 100 runs chasing a similar target of 246 was avoided as Pant and Pandya batted with intent and runs flowed. Even after Pandya left, when the target was still over 50, Pant did not let the momentum shift. Neither did he let the prospect of his maiden century disrupt the rhythm.
Once he had crossed the landmark, he uncorked the Pant we are more accustomed to: ransacking runs. With 24 runs needed from the final nine overs, Pant slapped David Willey for five successive fours in a 21-run over before finishing the chase with a reverse-swept four. He took off his helmet, raised his right hand and gave a thumbs-up and a winning smile to the Indian dressing room.
“When your team is under pressure and you bat like that – actually that is something I always aspire to. To do well in pressure situations. Hopefully I did well today and helped my team to cross the line,” Pant said.
Asked what set Pant apart, Buttler pinpointed the attacking mindset. “Rishabh is a very fearless player,” the England captain said at the post-match media briefing. “It is probably his mentality that seems to set him apart. Looks like he gets great backing to go and play how he wants to play.”
There have been 130 instances when a team has been three down for less than 50 while chasing targets between 250 and 270 in ODIs; only in 16 out of these matches has the chasing team recovered to win the game. And no team has won with as many balls to spare as India in this match. Rohit said Pant and Pandya’s success in the middle order was one of the positives India would take from the 2-1 series win.
“These guys haven’t batted for a long time in the middle overs, today we got to see that as well especially from Hardik and Rishabh,” Rohit said at the presentation. “I am quite pleased with both of them. They were quite clinical with the bat. At no given point of time they were panicking and trying to do something different. They just kept backing themselves and played cricketing shots all the way through.”
This was the first century stand for the Pant-Pandya pair, whose previous best was against the same opposition in Pune in 2021 where they bludgeoned 99 runs from 11.4 overs which played a role in India’s seven-run victory.
Pandya, who won the Player-of-the-Series award, said the highlight of Pant’s century was how he paced his innings, played to the situation and understood the need of the partnership. “Rishabh, he paced that innings, it was very important for us, that partnership as well and obviously the way he finished,” Pandya said. “We all know what kind of talent he has. When it comes out, it’s very pleasing to the eye – your heartbeat also goes up but at the same time you are in awe of the kind of shots he plays.”
Tags: England, England vs India, Hardik Pandya, India, India in England, Rishabh Pant