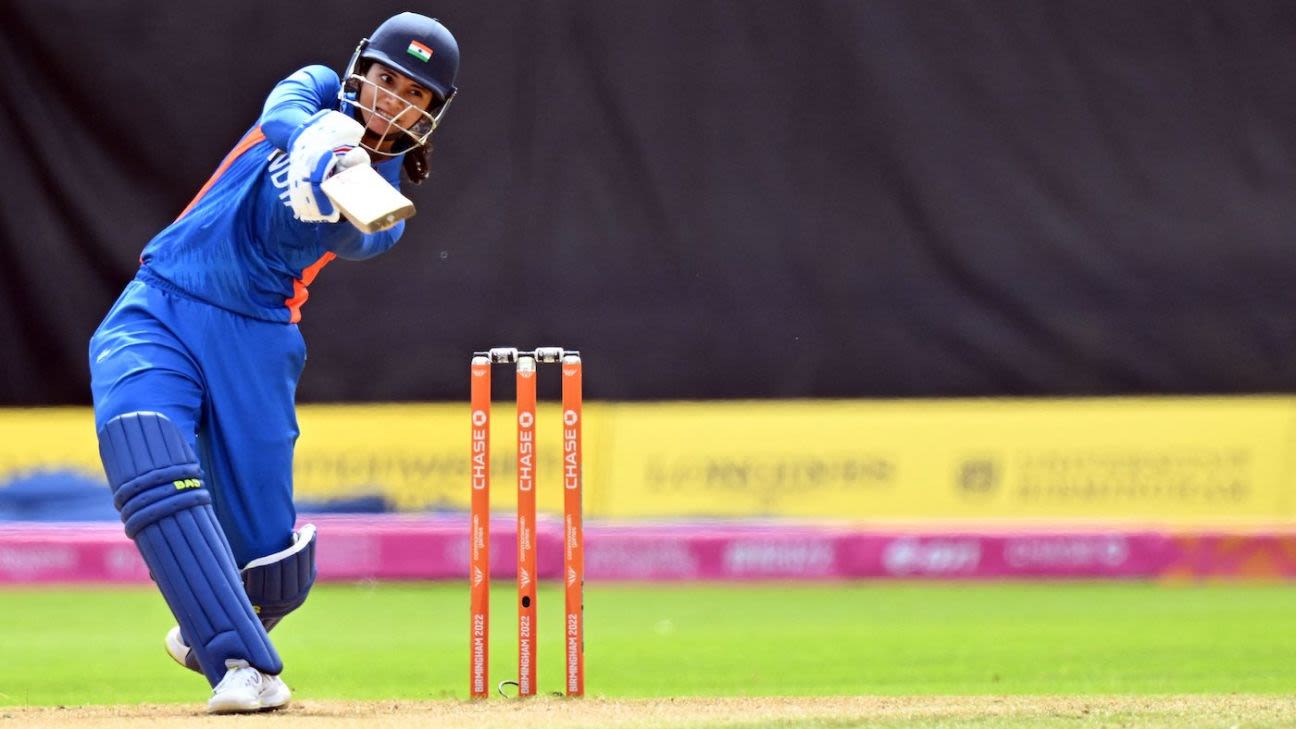 Smriti Mandhana’s unbeaten 42-ball 63 against Pakistan in the Commonwealth Games has taken her one spot up to third in the women’s T20I rankings for batters.
Mandhana’s power-packed half-century helped her go past Sophie Devine into the top three, and within two rating points of Beth Mooney, who is placed second. Meg Lanningis top of the pile.
Related
Mandhana has been No. 3 on the T20I batters’ list previously as well – first in 2019 and more recently in October last year.
The rankings were updated after six T20Is at the Commonwealth Games. Suzie Bates, on the back of her 91 not out off 64 balls against South Africa, jumped two slots, leapfrogging Alyssa Healy and Chamari Athapaththu to move to sixth place.
Harmanpreet Kaur, who scored a half-century in the CWG opener against Australia, moved four places to 14th position.
Ashleigh Gardner, the Australia allrounder, was one of the biggest gainers, moving in all three T20I lists. Her match-winning 52 not out in the opening game against India propelled her five places to 11th on the batters’ list. She then shone with the ball against Barbados, returning 2 for 6 in a crushing nine-wicket win that saw her jump from 45th to 26th on the bowlers’ list. Gardner also moved to a career-best third on the allrounders’ rankings – a jump of four places.
On the bowlers’ table, Jess Jonassen, who returned 4 for 22 against India, moved up two spots to fourth position, with Sophie Ecclestone still in the lead.
Megan Schutt and Amelia Kerr have moved up one spot each to seventh and eighth respectively. Hayley Matthews is the lone new face in the top ten of the bowlers’ rankings, replacing Ayabonga Khaka.
Tags: Ashleigh Gardner, Australia Women, Commonwealth Games Women's Cricket Competition, England Women, Harmanpreet Kaur, India Women, Smriti Mandhana, Sophie Devine, West Indies Women