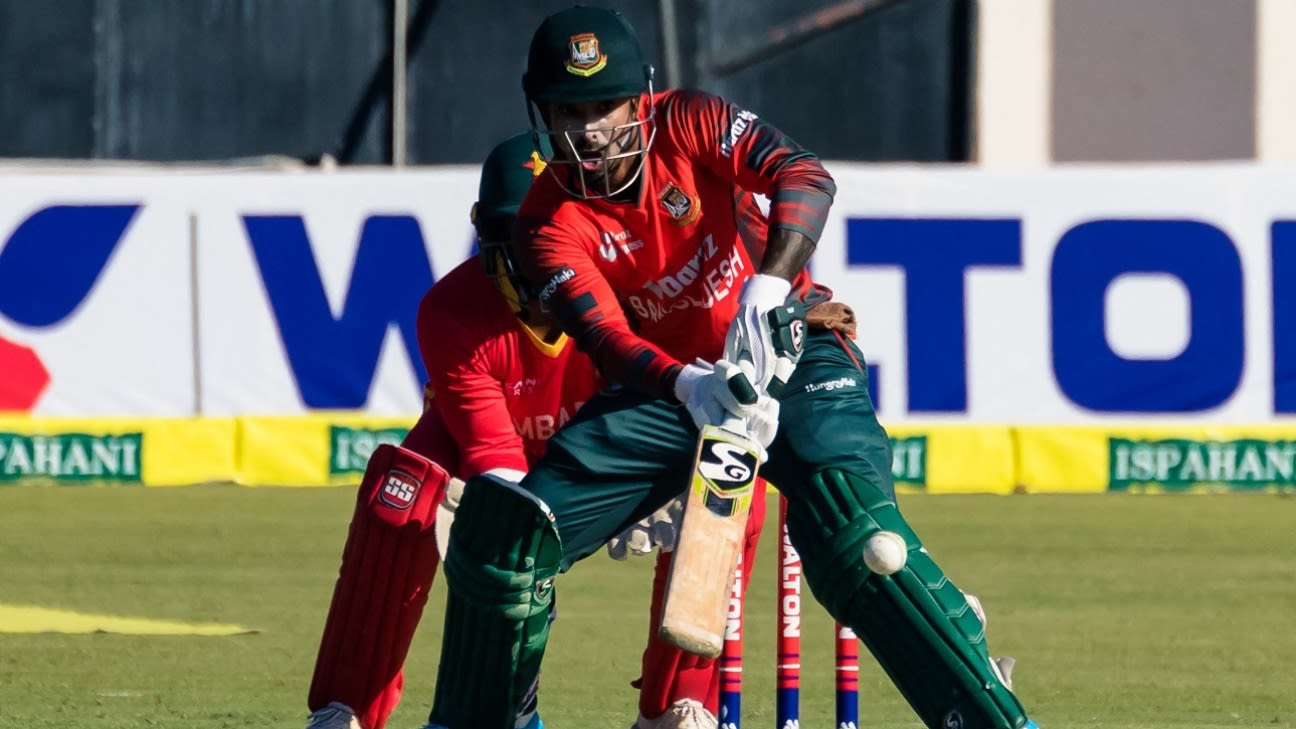 Bangladesh 136 for 3 (Litton 56, Afif 30*) beat Zimbabwe 135 for 8 (Raza 62, Mosaddek 5-20) by seven wickets
Mosaddek Hossain’s stunning opening spell set up Bangladesh’s series-levelling win against Zimbabwe in Harare. The part-time offspinner completed his maiden five-wicket haul in just the seventh over of the innings, and became only the fourth Bangladesh bowler to take a five-for in T20Is, after Elias Sunny, Mustafizur Rahman and Shakib Al Hasan
With Zimbabwe in tatters, Sikandar Raza scored a fighting half-century – his second of the series – but a total of 135 proved inadequate. Opener Litton Das spearheaded Bangladesh’s chase with a half-century and the target was achieved with seven wickets in hand and 15 balls to spare.
Five wickets in seven overs
Opening the bowling for the first time in T20Is, Mosaddek struck with the first ball of the match – Regis Chakabva edging the wide, innocuous delivery to the wicket-keeper. Wessly Madhevere, who had struck a fifty in the first T20I, slammed one straight to cover-point where Mahedi Hasan took an easy catch off the last ball of the over.
In his second over, Mosaddek had captain Craig Ervine caught at slip while attempting a reverse sweep, reducing Zimbabwe to 6 for 3. Sean Williams was next to go, chipping one back at Mosaddek in the fifth over, with the bowler having to jump to complete the return catch.
Mosaddek completed his five-for when Milton Shumba dragged one towards deep midwicket, only to see Hasan Mahmud run hard and complete a diving catch. Mosaddek became the first Bangladesh bowler to take the first five wickets to fall in an innings, and 31 was the lowest score for which Zimbabwe had lost their first five wickets in a T20I.
Sikandar Raza struck 62 off 53 balls and added 80 for the sixth wicket with Ryan Burl•AFP/Getty Images
Raza leads the recovery
Raza and Ryan Burl stopped the slide with an 80-run stand for the sixth wicket. Raza scored his second half-century of the series, hitting fours through cover and deep third, and also sixes over the leg-side boundary. He struck 62 off 53 balls before falling to Mustafizur in the 19th over.
Burl had fallen in the 18th, when Hasan Mahmud bowled him for 32. Towards the end of the innings, Luke Jongwe struck a late six, as Zimbabwe tried to capitalise on the recovery that Raza had led.
Litton starts quickly
Litton got Bangladesh’s chase off to a quick start when he struck Tanaka Chivanga for two sixes and a four in the third over. But he lost his opening partner Munim Shahriar cheaply for the second game in a row when Richard Ngarava bowled him through the gate.
Litton added 41 for the second wicket with Anamul Haque but got out shortly after reaching his half-century – his 56 off 33 balls included six fours and two sixes. Anamul struck two fours in his 16, but once again got out soon after getting set.
The final act
Afif Hossain was unbeaten on 30 off 28 balls and Najmul Hossain Shanto made 19 off 21 balls to take Bangladesh to the target. Their unbroken 55-run stand for the fourth wicket ensured there were no more hiccups for Bangladesh, who had lost their previous two wickets in the space of four balls.
The seven-wicket victory brought Bangladesh level at 1-1 in the series, with the decider on Tuesday in Harare.
Tags: Bangladesh, Bangladesh in Zimbabwe, Litton Das, Mosaddek Hossain, Sikandar Raza, Zimbabwe, Zimbabwe vs Bangladesh