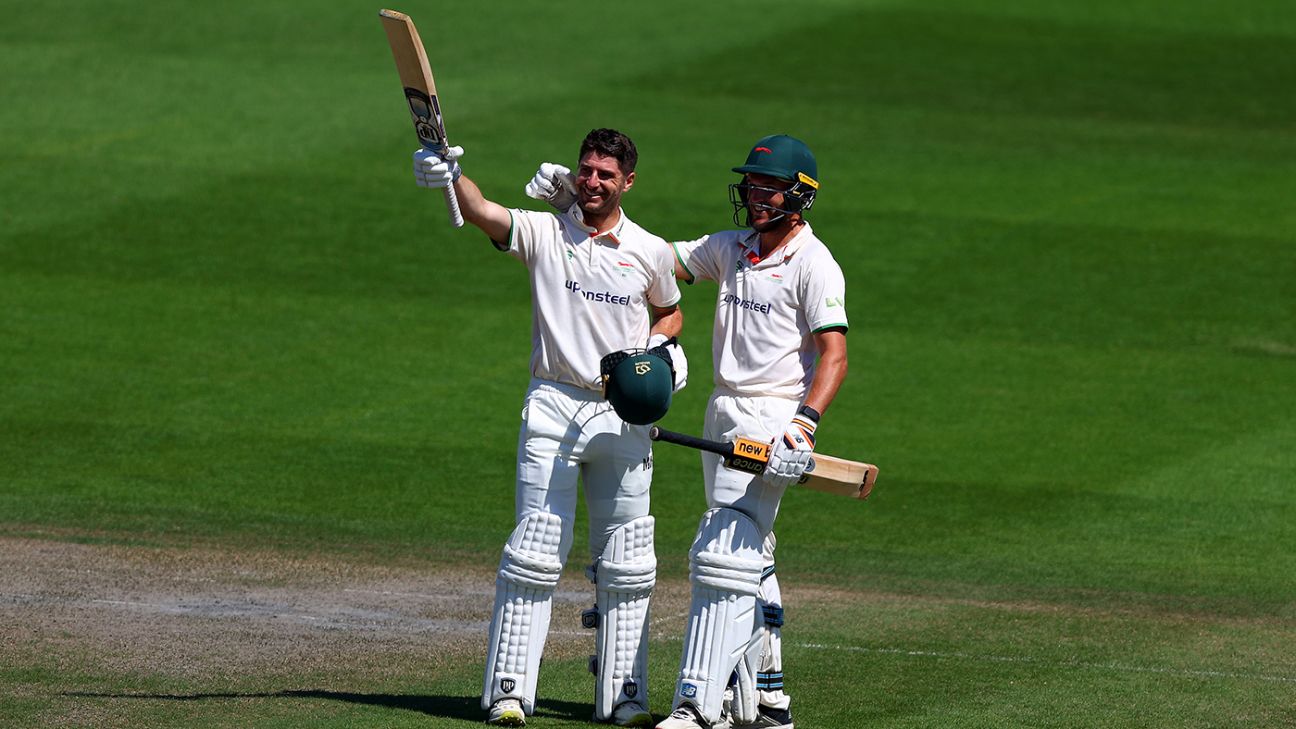 Sussex 588 (Alsop 150, Orr 70, Carter 75, Rawlins 75, Coles 59, Parkinson 5-128) and 220 for 1 dec (Orr 106*, Alsop 60*) drew with Leicestershire 756 for 4 dec (Ackermann 277*, Mulder 235*, Kimber 104, Patel 99)
Leicestershire are still looking for their first win of the season in the second division of the LV= Insurance County Championship but they had one of their most memorable days in their drawn match against Sussex at Hove
They scored 756 for 4, as their South African pair Colin Ackermann (277 not out) and Wiaan Mulder (235 not out) both made maiden double centuries. It was the highest innings in their first-class history, beating the 701 for 4 declared they scored at Worcester in 1906. The unbroken fifth-wicket partnership of 477 was also a record for any wicket for the county, and a championship record for the fifth wicket.
Ackermann looked capable of setting an individual record for the county, beating the 309 not out made by his near-namesake HD Ackerman against Glamorgan at Cardiff in 2006.
The records made less happy reading for Sussex. This was the most runs ever scored against them, beating the 726 they leaked at Nottingham in 1895 and was the highest innings scored in 150 years of cricket at Hove.
But when Leicestershire declared at lunch, setting Sussex 168 runs to avoid an innings defeat, the home side played positively, as Ali Orr and Tom Clark put on 79 for the first wicket. Sussex went on to make 220 for 1, with Orr making an unbeaten 106, the third century of his career and his second in as many matches, while Tom Alsop finished with 60 not out as he topped 200 runs for the game.
Leicestershire started the fourth day on 529 for 4, still 59 runs behind, but astonishingly they scored 227 runs in the session. The batters showed their intent when they scored 52 in the first half-hour. When Ackermann swept Delray Rawlins for a single, Leicestershire were in the lead after just 37 minutes play.
Then Ackermann pulled Sean Hunt backward of square to reach his double-hundred. His previous best was 196. Mulder, whose previous highest was 146, thrashed Henry Crocombe through the covers for four to raise the 400 stand, only the second in Leicestershire’s history.
Rawlins was the most expensive of the Sussex bowlers, with figures of 0 for 223 – another championship record. But Ackermann and Mulder were magnificent, hugging each other as they reached their bigger landmarks.
The pitch was the biggest winner, with just 14 wickets falling in four uninterrupted days.
Tags: Ali Orr, Colin Ackermann, County Championship Division Two, Leicestershire, Louis Kimber, Sussex, Sussex vs Leics, Tom Alsop, Wiaan Mulder