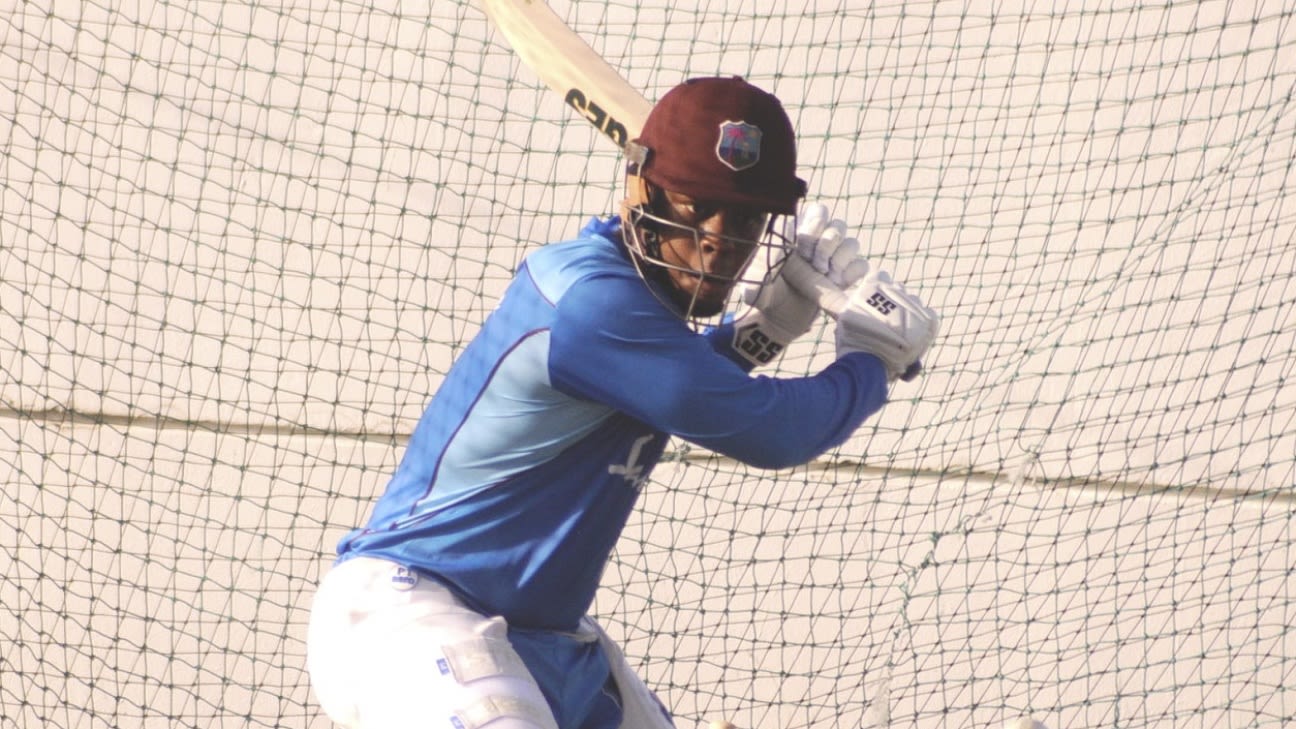 Batter Shimron Hetmyer has returned to West Indies’ T20I squad for the upcoming five-match series against India and the following three-match series against New Zealand after clearing a fitness test. Hetmyer had been omitted from West Indies’ recent squads on fitness grounds, and was with the ODI group earlier this month in Port-of-Spain to work with the trainers and the support staff. He last represented West Indies in November 2021, during the T20 World Cup in the UAE.
“We welcome back Hetmyer and it is good to see him again in West Indies colours,” chief selector Desmond Haynes said in a CWI media release. “He will fortify the batting group and with his experience and adaptability we have a ‘finisher’ who can add value and win matches for the team and delight the supporters.
“Everything we do, we have to take into consideration we have a big tournament coming up later this year, which is the ICC T20 World Cup, so we are planning and gearing up towards that event. It is good to give the players some exposure to the international stage and look to find the right combinations.”
ESPNcricinfo Ltd
Opening batter Evin Lewis, however, was not part of the squad once again. After Lewis was overlooked for the recent white-ball series at home against Bangladesh, Haynes had said that Lewis had not completed a fitness test that had been arranged for him during his IPL stint with Lucknow Super Giants.
Left-arm fingerspinner Gudakesh Motie, who had been sidelined from the second and third ODIs against India with a fractured thumb, sustained while fielding, has not recovered sufficiently to be available for selection for the T20Is against India and New Zealand. In the absence of Motie, Akeal Hosein, the other left-arm fingerspinner, and Hayden Walsh Jr, the legspinner, are the frontline spin options for West Indies.
Allrounder Fabian Allen, who can also bowl left-arm spin, has pulled out for personal reasons. Allen has not played a competitive game since making his IPL debut for Mumbai Indians in April 2022. Left-arm seamer Sheldon Cottrell, meanwhile, was unavailable because of injury.
Allrounders Dominic Drakes, who was part of the reserves for the T20Is against Bangladesh, and Jason Holder, who recovered from Covid-19 and proved his fitness in the third ODI against India on Wednesday, returned to the main squad. West Indies have a wealth of all-round options to choose from: Keemo Paul, who has recovered from a hamstring injury sustained during the Bangladesh series, Romario Shepherd and Odean Smith are the others.
Devon Thomas has been retained as the back-up wicketkeeper to Pooran, ahead of Shai Hope. Apart from Thomas, Shamarh Brooks and Brandon King, all the members of West Indies’ T20I squad have had a taste of the IPL as squad members or net bowlers. Hosein and Walsh Jr. have worked with Kolkata Knight Riders and Rajasthan Royals respectively as net bowlers.
The first T20I against India at the Brian Lara Stadium in Tarouba on Friday will also be the first international match to be played at the venue. Warner Park in Basseterre will host the next two T20Is before the sides head to Lauderhill for the final two T20Is. Three days after the last T20I against India, West Indies will face a full-strength New Zealand team in a three-match T20I series in Jamaica.
Pooran had said earlier this week that he was wary of the workload but wanted his best players to be available for selection as West Indies build towards the T20 World Cup this year and the ODI World Cup next year.
“That [managing workloads] is a tough one because as a group we want to win and we want all our players to be available for us,” Pooran said. “But in seeing that we need to look after our players and that’s the key as a collective effort for the coach, chairman of selectors and myself, we need to determine… not only myself but the other guys who we believe need to rest.
“Obviously, that’s very important with eight T20 games coming up, four more ODIs and then CPL coming up and the addition of the 6ixty and the CPL, we definitely need to manage the players. How? I’m not too sure, but we need to figure it out and be smart about it as well. But, at the end of the day, we want to win, and we need to have all our guys to be available to us.”
Tags: Desmond Haynes, Evin Lewis, Fabian Allen, India in West Indies, New Zealand tour of West Indies, Sheldon Cottrell, Shimron Hetmyer, West Indies, World Cup Super League