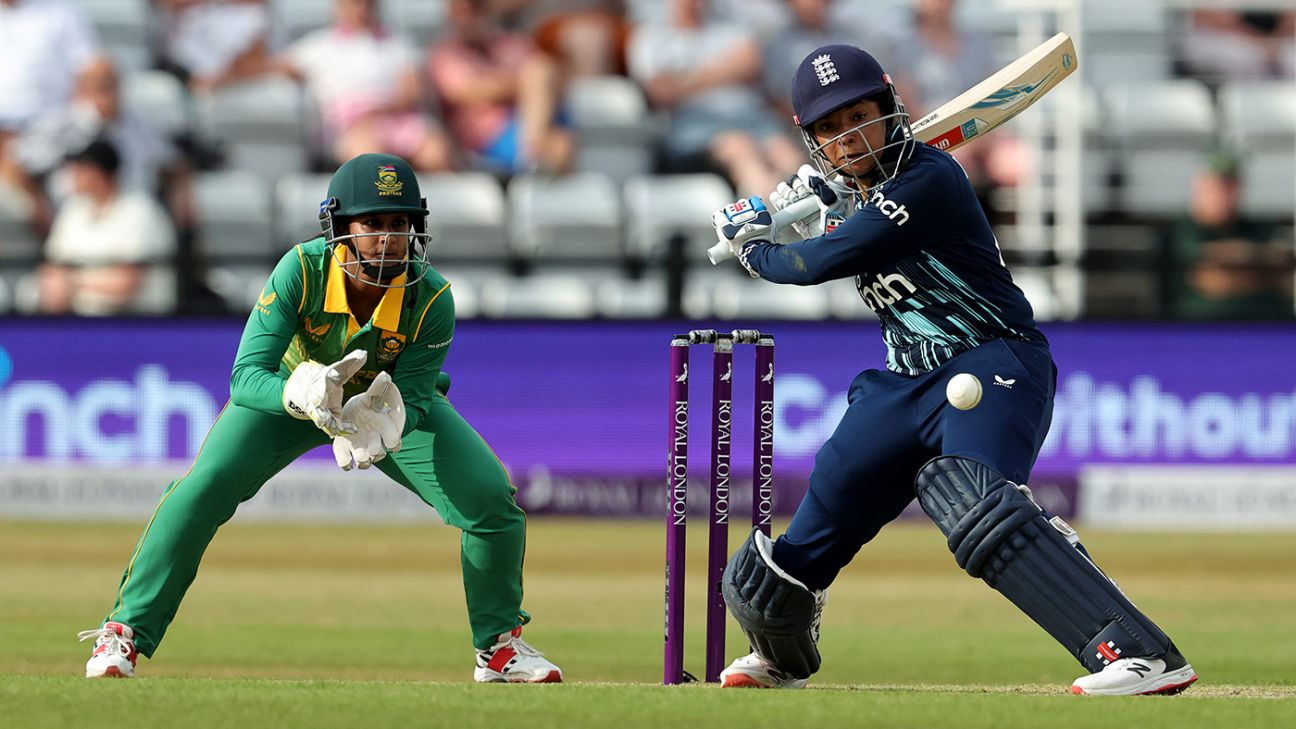 No sooner had Sophia Dunkley established herself in England’s middle order, she set her sights on making a place in the top-four her own. No sooner had England switched focus to the next Women’s World Cup cycle, she is doing just that.
In her first international outing at No. 3, Dunkley scored 22 from 24 balls as England convincingly beat South Africa in their first of three ODIs at Northampton. The knock was in keeping with her proactive batting style, which Dunkley said she was reluctant to give up heading into the second match at Bristol on Friday. It was also a key part of England’s bid to shake up their batting line-up, with the successful addition of new opener Emma Lamb and Danni Wyatt shuffling back down into the middle order.
“One of my goals and dreams the last year was to break into England’s top four,” Dunkley said. “So the fact that I have an opportunity now to bat at three, it’s an amazing feeling. It’s something I’ve done in regional cricket for the last two years, so not completely new, but obviously a different level in internationals.
“Naturally the bowling’s a little bit tighter, you don’t get as many bad balls, and you get a lot of pressure built on you in the powerplay, so it’s about learning how to deal with that and how I want to go about it. It’s probably not going to come overnight, and the next two games might not go as well as I’d like, but it’s about building for the future, how I see myself doing that role in the long term.”
Dunkley’s first knock as England’s No. 3 included three powerful fours, driven through cover and twice hammered past long-on before she fell lbw to Nadine de Klerk.
“I don’t want to take away too much of my natural aggression and intent because I think that’s still really important to push us on as a team,” she added. “So it’s finding the balance really and just doing the low-risk things for longer. I’ve had some good practice in the nets so I’m feeling good.”
Related
When opener Tammy Beaumont fell in just the third over of the match, Dunkley had the best view in the house as Lamb carved out a maiden century in just her fourth international appearance.
Lamb had opened alongside Beaumont in the drawn Test which kicked of the multi-format series between the sides in Taunton last month and took a massive step towards establishing herself at the very top of the order in the ODI format with her knock.
“Emma batted outstanding in the last game,” Dunkley said. “I’m so pleased for her. I’ve played a lot of cricket with her growing up, and grown up with her in the academy, so when we were batting together we were joking about how it was like the old times and it was nice that we could do that in an England shirt together.
“It was amazing to watch her do her thing and show the world that she deserves to be an England opener, so I’m sure it’s the first of many for Emma.”
It will be one day shy of 13 months since Dunkley made her Test debut against India – also in Bristol – where she notched up an unbeaten 74 in a keenly contested draw.
She went on to play an important part in the white-ball part of India’s tour before finishing the English summer playing in all five ODIs against New Zealand. A trip to Australia as part of England’s ill-fated Ashes tour was followed by the World Cup, where she made a couple of half-centuries, including in England’s semi-final defeat of South Africa.
“Personally it’s been a pretty crazy year and there’s been a lot of different cricket, playing in an Ashes and a World Cup was a surreal experience,” she said. “Now coming in batting at three is something different so yeah, it’s been lots of experiences, ups and downs, but a great year of cricket all round.”
And she was expecting South Africa to come back fighting after a muted display in the first ODI, when their batting failed to fire. Katherine Brunt returned to international action with an imposing first spell and figures of 3 for 18 from nine overs before Chloe Tryon’s 88 gave the tourists some hope. Then their bowlers struggled against Lamb’s accomplished display and a brutal 55 off just 36 balls from Nat Sciver, who had also taken four wickets.
South Africa’s bowling could be boosted by the return of Shabnim Ismail, who is available for selection in what would be her first appearance of the tour after recovering from a calf strain, with England leading four points to two.
“We bowled really well in the first innings last game and it made it really hard for them to get a big score on the board,” Dunkley said. “Credit to our bowlers and Katherine up front bowling in that amazing spell, five overs for five runs.
“We’re just really clear as a batting unit that we want to go out and be positive, so it was a great to be able to put that into practice and we definitely put pressure on their bowlers so I’m sure they’re going to come back hard at us in the next game.”
Tags: Danni Wyatt, Emma Lamb, ENG Women vs SA Women, England Women, Shabnim Ismail, Sophia Dunkley, South Africa Women, South Africa Women in England