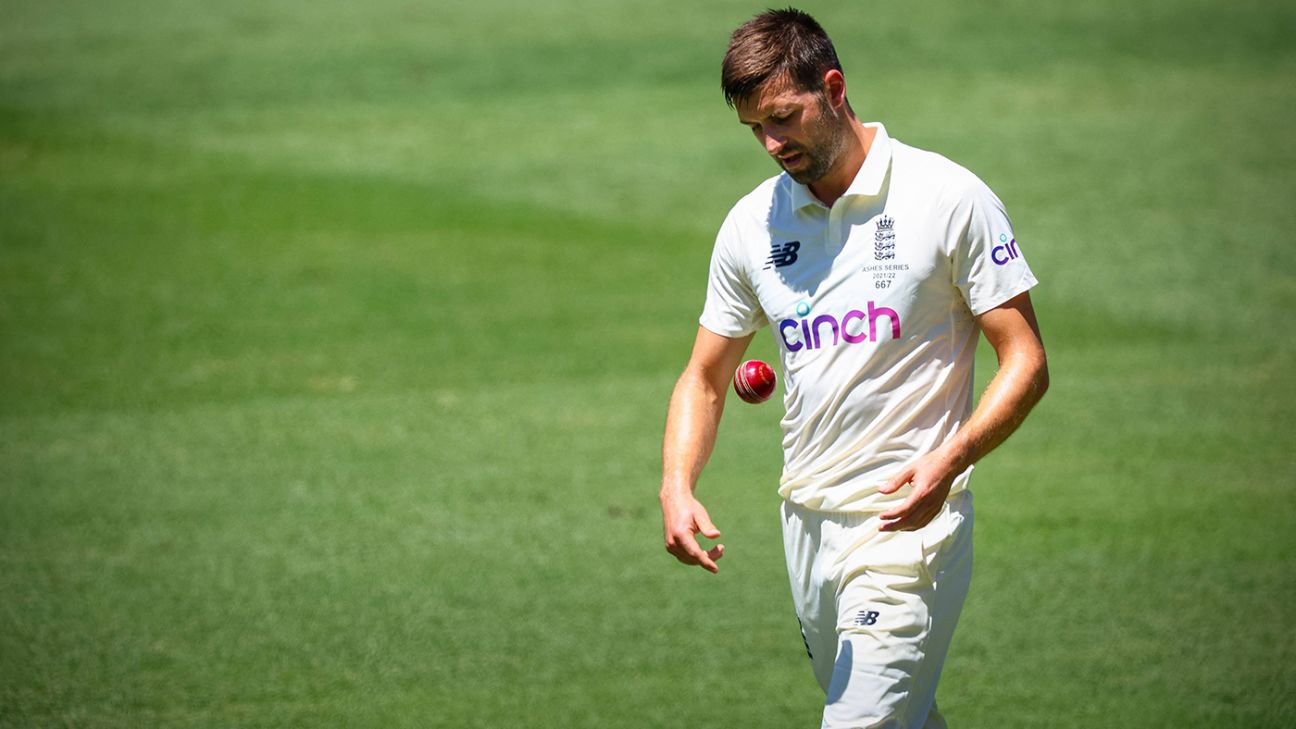 Mark Wood has revealed he is due to undergo a further operation on his troublesome right elbow this week, and will miss the rest of the English summer. He remains hopeful of making the T20 World Cup in Australia which begins in the middle of October.
Wood has been out since March after sustaining the injury in the first Test of the tour of West Indies. An operation at the end of that month removed a bone that was blocking the joint, preventing his right arm from straightening.
Originally it was hoped that Wood, 32, would return within three months, and his recovery began well until he began encountering further issues in the area. The hope from the ECB and Durham medical teams was that the pain was just part of the rehabilitation process and would eventually subside.
He was originally pencilled in for Durham’s Vitality Blast game against Notts Outlaws at Trent Bridge on July 1 before he was taken out of consideration in case the elbow had a bad reaction. Following a few sessions at full pace in the Chester-le-Street nets at the end of last week, he turned out for his home club, Ashington Cricket Club, on Saturday and took five wickets against Lanchester Cricket Club.
Unfortunately, Wood woke up on Sunday unable to straighten his arm again and, with time running out to be fit for the T20 World Cup, the decision was made to operate again later this week.
Related
“It’s not going well actually,” Wood told Test Match Special during Tuesday’s first ODI against South Africa. “I’m off again for probably more surgery on Saturday. I played a club game to see what it was like when I tested it out, so unfortunately it’s not pulled up well. To be ready for the World Cup, I’m going to have to get that done.
“I’ve been bowling for the last two or three weeks in the nets, top speed also off my full run-up. But it just seems to keep deteriorating. When I played that club game it was an indication in a match of how does it actually feel. The next day… I can straighten my left arm fully, but my right arm is still sort of bent a little bit.”
The setback is another blow to England’s fast bowling stocks, with Jofra Archer’s recovery from a stress fracture of his back still uncertain. Olly Stone, the other 90-plus mph option, has been working his way back in the Blast with Birmingham Bears.
Wood remains hopeful of making it to Australia, even if he is unsure of the exact issue. The need to get to the heart of the problem stems from the fact that each strong session would require a period of recovery, making back-to-back sessions impossible.
“It’s not so much at the time,” Wood said. “It’s more the day after. If I had to back it up or if I was in the tournament, for example, it would knock me back four or five games, or days.
“That’s why it’s crunch week this week. That’s why I’ve been building it up so much. But this week it needed a decision, so that’s why I played the club cricket. Unfortunately it hasn’t been good. The frustration for me is I’ve done everything everyone has asked. It’s just not giving me a break.”
Tags: England, ICC Men's T20 World Cup, Mark Wood