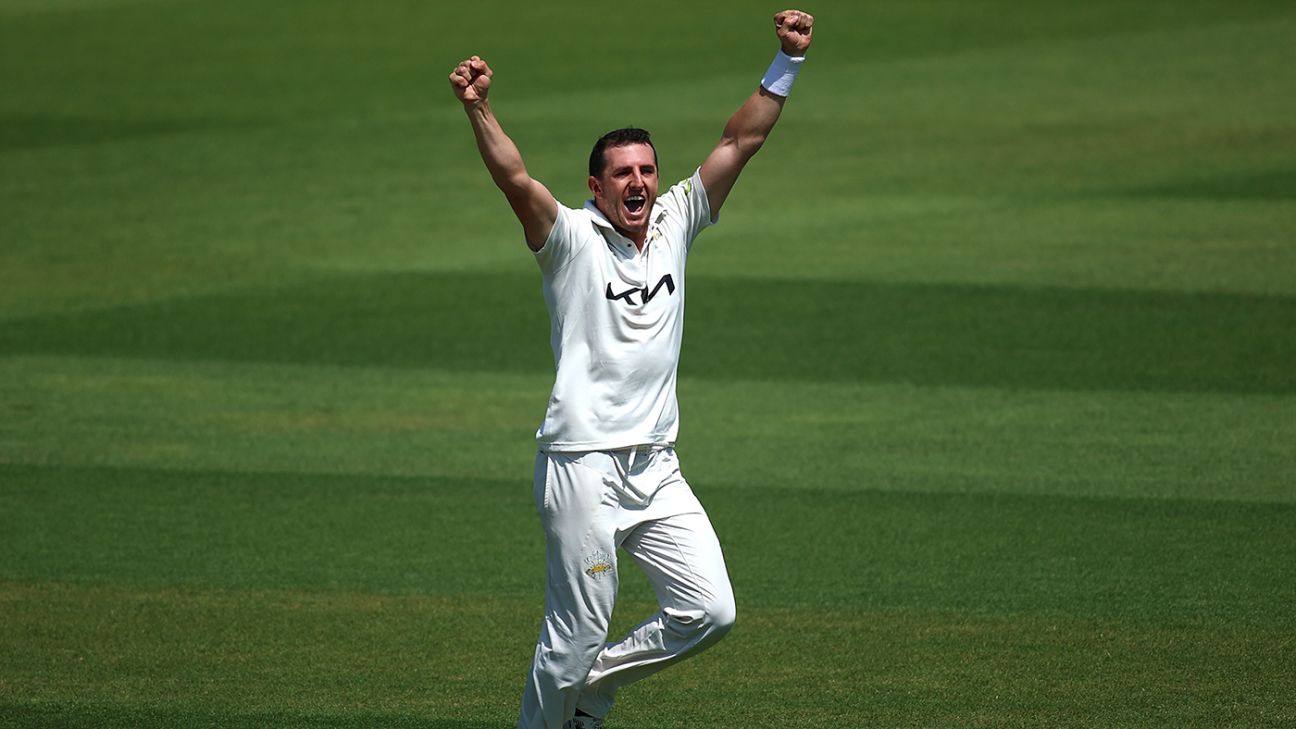 Surrey 24 for 1 (Burns 18*, Cook 1-6) trail Essex 271 (Rossington 100, Harmer 50, Worrall 6-56) by 247 runs
Adam Rossington and Dan Worrall were the first-day heroes at the Kia Oval, with No. 7 Rossington scoring an extraordinary 100 and Worrall bowling brilliantly to take 6 for 56 as Surrey and Essex traded fierce blows in blistering conditions.
Rossington rushed to his century with an exhilarating assault on the second new ball, in Essex’s 271 all out, clubbing Kemar Roach for three leg-side sixes before wearily skying the same bowler to long on in the 83rd over.
Simon Harmer’s 50 was another fine effort as Essex rallied hard after Worrall had earlier taken 3 for 0 in five balls as the LV= Insurance County Championship leaders initially reduced their opponents to 91 for 6 by lunch.
In 9.1 overs’ batting before stumps, Surrey replied with 24 for 1 with Ryan Patel, pushing forward, caught at second slip for 4 off Sam Cook from what proved to be the final ball of the day. Rory Burns remained 18 not out.
The determined seventh-wicket stand of 113 in 41 overs between Rossington and Harmer held up Surrey for more than two-and-a-half hours and blunted an attack that had looked unstoppable in the morning session.
Worrall, Roach and Jamie Overton were all highly impressive in a sustained, top-class exhibition of pacy swing bowling, with only Alastair Cook resisting for long in the opening session as Surrey’s battery of fast and fast-medium bowlers exerted an early stranglehold every bit as oppressive as the near-40 degree temperatures.
Kemar Roach celebrates taking the wicket of Matt Critchley•Getty Images for Surrey CCC
Nick Browne got to 10 with a couple of flowing off-side strokes before Roach shaped one away from the left-hander from around the wicket to force him to thin-edge to keeper Ben Foakes in the fifth over.
And although Tom Westley did well to dig out a searing Roach yorker early on as he reached 11, helping Cook to take Essex to 50, the Essex captain became the first of three strikes in quick succession by Worrall when he played around a straight ball and was bowled by the Australian’s third ball back into the attack.
Worrall then pinned Dan Lawrence leg-before for 0 with his next ball and, with the first ball of his next over, made one climb steeply at Paul Walter to have the tall left-hander caught at leg slip off the glove.
Matt Critchley narrowly survived two confident lbw appeals by Worrall, who was combining sharp outswing and inswing with exemplary control, and Essex did well almost to reach the sanctuary of the lunch interval before Surrey’s quicker bowlers intervened again.
Overton, reintroduced five minutes before the break by Surrey captain Burns for a second spell – this time from the Vauxhall End – angled his second ball across Cook to have England’s record Test run-getter well held by Ollie Pope at second slip for a 75-ball 29.
Roach then bowled Critchley for 21 off an inside edge and both Rossington and Harmer had to negotiate a number of leg-before appeals in the afternoon session before reaching tea at 194 for 6.
Rossington, on 16, also edged a brute of a ball from Overton just out of third slip’s reach for four and, on 28, was close to being lbw to Tom Lawes. Harmer, for his part, narrowly avoided the umpire’s raised finger against Overton on 6 and Roach on 26. The West Indian paceman, in particular, looked distraught at the not out decision.
Fourth-placed Essex, starting this game on the back of three successive championship wins but still 47 points adrift of Surrey, albeit with a game in hand, had chosen to bat on a well-grassed surface and Rossington’s heroics made sure they reached a competitive total.
Harmer, having faced 147 balls, was finally lbw to Worrall, who then trapped Shane Snater in front two balls later to leave Essex 204 for 8.
But tailender Sam Cook’s unbeaten 21 was a more than useful hand as 58 more runs were added with Rossington for the ninth wicket. After Rossington had gone to Roach (3 for 63) for his superb 151-ball and 227-minute effort, featuring those three late sixes and nine fours besides, Worrall finished the innings by having last man Jamie Porter leg-before for a duck.
Tags: Adam Rossington, County Championship Division One, Daniel Worrall, Essex, Essex vs Surrey, Simon Harmer, Surrey