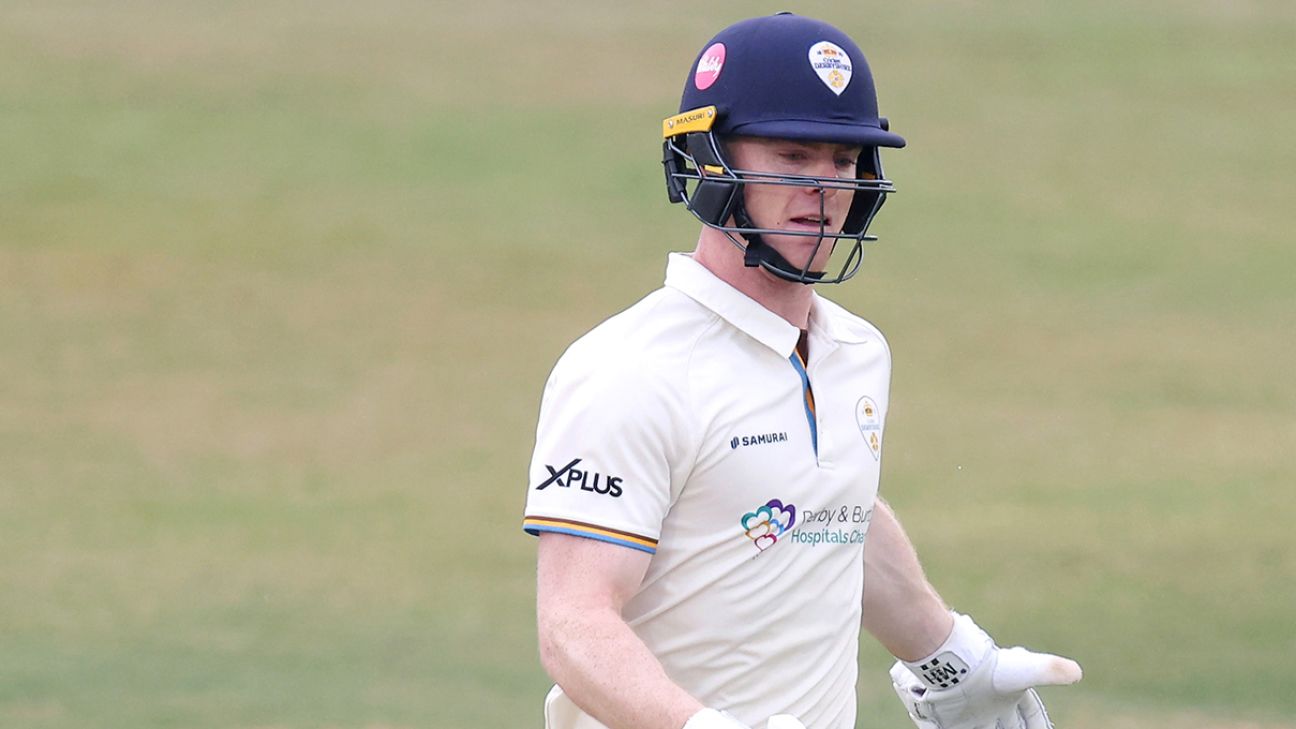 Derbyshire 318 (Guest 109, Madsen 74) and 79 for 0 (Came 38*, Reece 30*) trail Nottinghamshire 618 for 8 dec (Duckett 241, Hameed 196, Patterson-White 54) by 221 runs
Derbyshire wicketkeeper Brooke Guest scored his fourth century of the season to hold up Nottinghamshire on the third day of the LV=Insurance County Championship match at Derby.
Guest batted six-and-a-quarter hours for his 109, sharing a third wicket stand of 140 in 52 overs with Wayne Madsen, who made 74.
Luke Fletcher took 3 for 44 and Nottinghamshire captain Steven Mullaney 3 for 51 to bowl Derbyshire out for 318, 300 behind the visitors who enforced the follow-on.
That left the Division Two leaders 38 overs to push for victory but Harry Came with 38 and Luis Reece,30, stood firm to steer Derbyshire to 79 without loss.
Nottinghamshire’s bowlers had also been kept at bay for a large chunk of the morning before Mullaney’s relentless accuracy was rewarded.
Madsen had never scored a century against Nottinghamshire and he missed out again when he steered the all-rounder to slip.
Mullaney struck in his next over when he found just enough movement to have Leus du Plooy caught behind before rain interrupted a Derbyshire championship game for the first time this season.
After an early lunch, the visitors chipped away at Derbyshire’s middle and lower order with only Guest offering the prolonged resistance the situation required.
Hilton Cartwright played on trying to force James Pattinson who breached Anuj Dal’s defence with a ball that seamed away late.
When Mattie McKiernan edged another good ball from Mullaney, Guest was in danger of being stranded in the nineties but a straight drive off Dane Paterson earned him the distinction of becoming the first Derbyshire wicketkeeper to score a hundred against Nottinghamshire since Bill Storer at Trent Bridge in 1898.
Guest went for the same score as Storer made 124 years ago, although his chances of matching his illustrious predecessor who removed his pads and took three wickets in that game are slim at best.
With Guest out, Nottinghamshire would have expected to wrap up the innings quickly but the last two wickets took another 10 overs out of the day before Derbyshire were sent back in.
Under cloudy skies with the floodlights on, Derbyshire openers faced a challenging end to the day but Reece and Came showed good judgement and restraint to get to the close and, with rain in the forecast tomorrow, increase the home side’s chances of saving the match.
Away from the game, Derbyshire batter Tom Wood has been cleared to resume his career after serving a six month ban for the prescribed use of a controlled substance.
Wood returned a positive test last September for terbutaline which was in an asthma inhaler he has used since 2004.
His request for a retroactive Therapeutic Use Exemption was rejected although it was accepted he had no intention of breaching anti-doping rules.
Derbyshire chief executive Ryan Duckett said: “This has been an extremely challenging and distressing time for Tom who has handled himself impeccably throughout the process.
“This was a genuine mistake, regarding an inhaler Tom has been prescribed since he was a child.”
Last season, Wood made 109 off 59 balls, the third fastest century in Derbyshire’s history, in the Royal London One-Day Cup against Nottinghamshire.
Tags: Ben Duckett, Brooke Guest, County Championship Division Two, Derbyshire, Haseeb Hameed, Nottinghamshire, Notts vs Derbyshire, Wayne Madsen