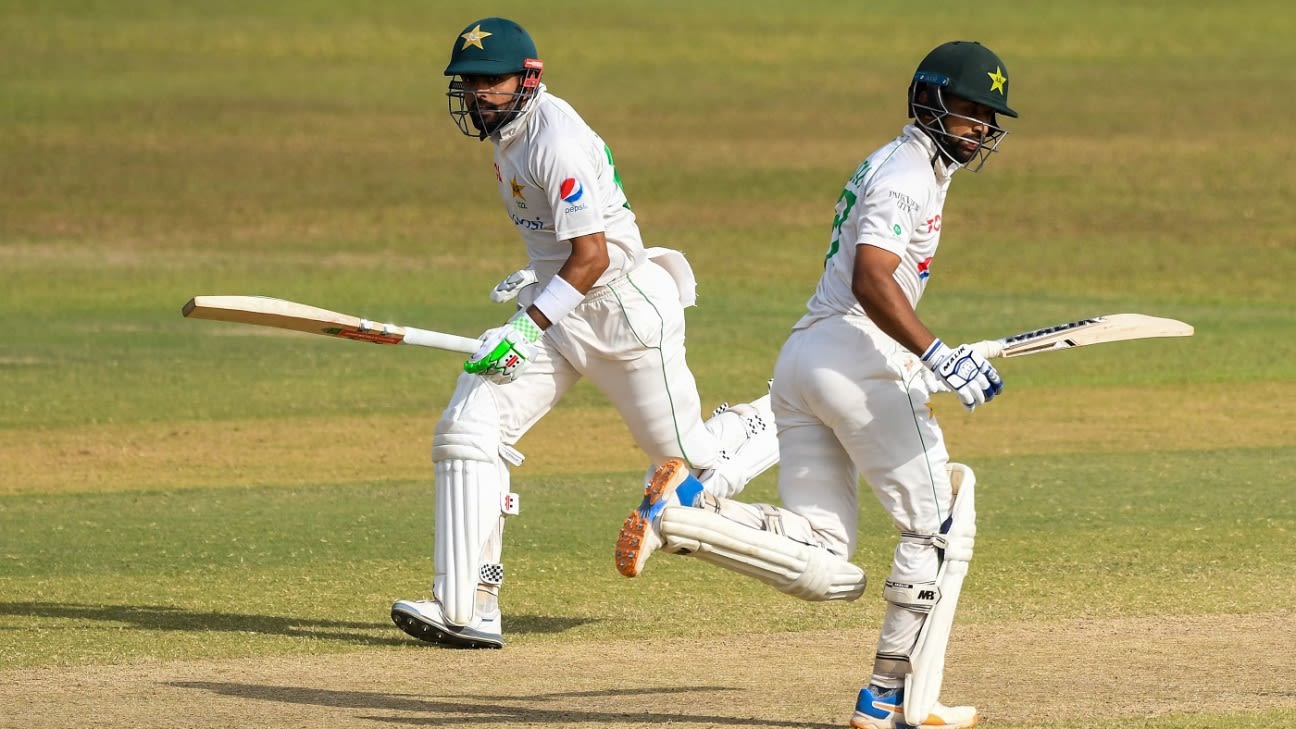 Pakistan captain Babar Azam believes Abdullah Shafique is capable of becoming “one of the best” players in the world. Babar praised the opener for showing “class and temperament” in “difficult conditions” during the Galle Test. Babar also rated his own hundred in the first innings as “one of the best” because it came on a difficult surface.
Shafique, playing just in his sixth Test, scored an unbeaten 160 in the fourth innings to help Pakistan chase down 342, the highest successful chase by any team in Galle, in the first Test against Sri Lanka. He batted for 542 minutes, the longest a player has during a successful chase in Tests. Having made his debut less than nine months ago, he has scored 720 runs in eleven innings at an average of 80.00, with two centuries and four half-centuries.
Related
“As a youngster, when you make your case, you have to perform in different and difficult conditions,” Babar said. “He [Shafique] showed his class, temperament, and how confident he is. Batting against quality bowling is going to boost his confidence. The way he plays is so clean, and how he remained focused makes it quite evident that there are many more [hundreds] to come. Though it’s just six matches and it’s too early to say that [he is the best opener in the world right now] but as a player, I think and hope that he can become one of the best.”
The contest remained evenly poised for the first three days but Pakistan batters turned it around on day four, patiently getting through many moments of nervousness. Shafique and Babar’s strong stand left them with just 120 to get on the final day with seven wickets remaining, and the former stayed till the end to guide his team home.
By doing so, Pakistan laid the ghosts of 2009, when they had lost their last eight wickets in 46 runs in a chase of 168 at this venue. Babar said Pakistan had prepared well ahead of this series to handle Galle’s spin-friendly conditions.

“It [his century in the first innings] is kind of special, you can say, because the team needed me [at that point]. Scoring in difficult conditions, and achieving something from it, takes your confidence and satisfaction to a different level”
Babar Azam

“We basically planned and prepared to keep the pitch conditions in mind because at Galle, we know the spinner gets help,” Babar said. “With the game going deep in the later stage, when it gets rough, the ball carries more turns and bounces. So this is exactly what we had in mind while preparing. Hence, we have the result in our hands.”
Pakistan were 112 for 8 at one stage in the first innings but Babar stitched crucial partnerships with Hasan Ali and Naseem Shah for the last two wickets to take the side within touching distance of Sri Lanka’s first-innings total. Babar called his knock of 119 a “special” innings and said it required “double concentration” to bat with the tail.
“It’s kind of special, you can say, because the team needed me [at that point]. Scoring in difficult conditions, and achieving something from it, takes your confidence and satisfaction to a different level. One of the best, you can say, because it was different: wickets were down, batting with tailenders… you required double concentration with them at another end. You have to guide them and have to watch out for yourself as well. Then the field is open and you have to find scoring options. So in all this, you have had to plan and execute all around. So I am very happy with it.”
While the Pakistan seamers, especially Shaheen Shah Afridi, found success in the first innings, it was the spinners who took control of Sri Lanka’s second innings, bowling 74 of the 100 overs. While Babar backed the fast-bowling unit, he did say the team management would decide the combination for the next Test, which starts on July 24 at the same venue, only after assessing the conditions.
“Pakistan has produced fast bowlers and won games even on flats tracks but we will sit before the next match and decide what combination we should go with. Every match you play, it does have its good and bad [parts] and you obviously want to enhance the good ones, and work on your mistakes and improve [the bad ones].”
Tags: Abdullah Shafique, Babar Azam, ICC World Test Championship, Pakistan tour in Sri Lanka, Sri Lanka vs Pakistan