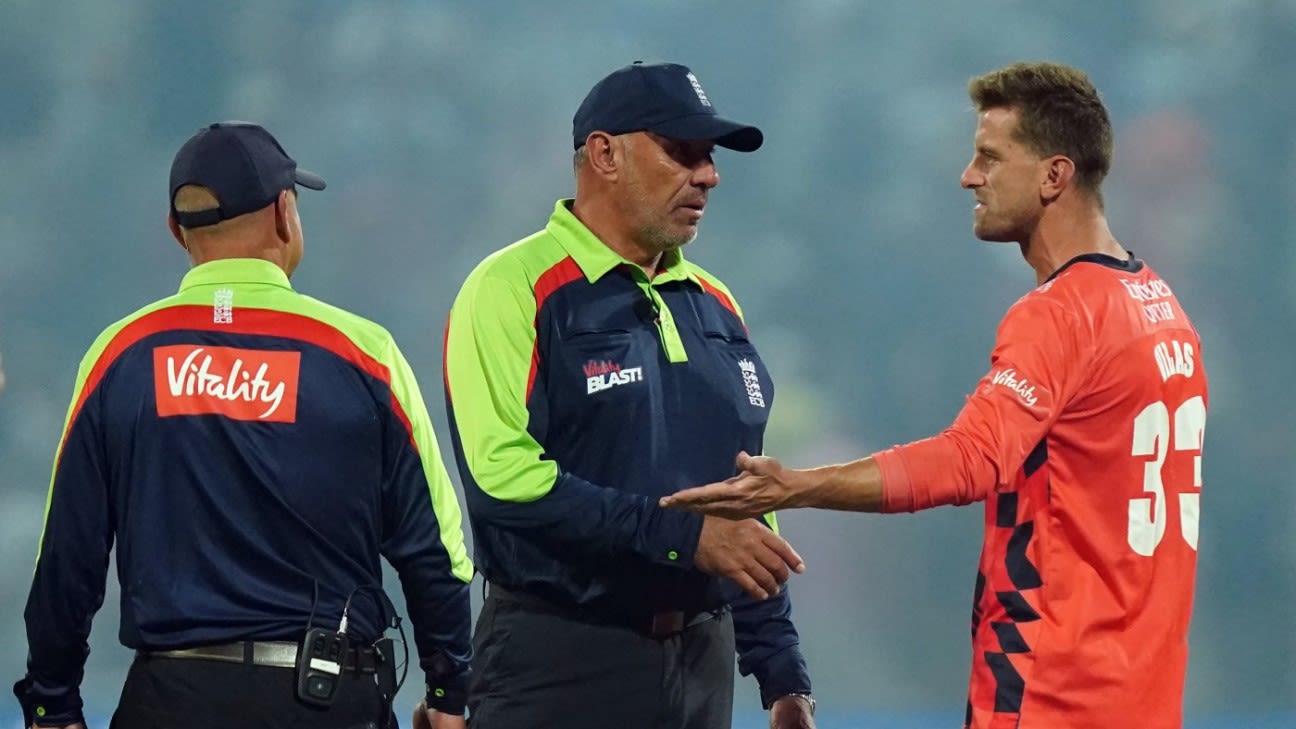 Lancashire believe that they should have been awarded a second run off the last ball against Hampshire, rather than just a single bye, and therefore won the T20 Blast title on Saturday night after a chaotic final over at Edgbaston.
After a dramatic no-ball call forced Nathan Ellis to bowl an extra delivery at the end of the 20th over, Lancashire were two runs short of Hampshire’s total. Under the Blast’s playing conditions, tied knockout games are won in the first instance by the team that has lost fewer wickets (they had both lost eight), then the team with the higher powerplay score (Lancashire made 60 to Hampshire’s 48).
As a result, Lancashire needed two runs to win the title. Richard Gleeson played and missed at a slower ball, and Tom Hartley ran a bye through to wicketkeeper Ben McDermott, who ran to the stumps and dislodged the bails at the keeper’s end, at which stage the umpires determined that the ball was dead.
Gleeson, meanwhile, was coming back for two having grounded his bat at the non-striker’s end, and Hartley set off once he saw Gleeson running towards him. McDermott ran to the bowler’s end. He was handed a stump that had been removed in celebration by Mason Crane but did not appear to break the wicket at all as Hartley scampered back to make his ground. One bye was awarded, which meant Hampshire won by one run.

The utter, utter drama of #Blast22.

“We thought the ball was still live and Tommy came back for two,” Dane Vilas, Lancashire’s captain, said. “There was a little bit of confusion out there but the umpires called the ball dead as soon as they took the stumps [bails] off at the striker’s end.”
According to Law 20.1.1, the ball becomes dead when “it is finally settled in the hands of the wicket-keeper or of the bowler” and according to Law 20.1.2, “the ball shall be considered to be dead when it is clear to the bowler’s end umpire that the fielding side and both batters at the wicket have ceased to regard it as in play.”
“Analysis of the footage of the match showed that, when the umpire signalled the bye, the original non-striker was standing still, about four yards behind the striker’s wicket, while the striker was slowing down in his attempt to reach the other end, so it was reasonable to consider that the ball was dead,” the MCC said in a statement on Sunday.
“The match was concluded when the ball was deemed to be dead by the umpire, after the batters had completed one bye from the final ball. The bowler’s end umpire signalled the bye to the scorers. Under Law 2.13.3, the signal for bye shall be made to the scorers only when the ball is dead. The ball was dead because, in the view of the umpire, it was finally settled in the hands of the wicket-keeper.
“It is not therefore relevant that the wicket was not lawfully put down at the bowler’s end. Once the umpire has made the decision that the ball is dead, that decision cannot be revoked.”
“There was a little bit of confusion because we thought the boys were going for another run and Tommy was quite keen on getting that other run,” Vilas said. “We’ll have a look back at the game in a bit more detail.
“Everything was going on out there at that stage. I can’t be 100% sure of what was said exactly, but we thought maybe we could have had a look and seen if it was a review or something, but it obviously wasn’t and ended up being called as a Hampshire win.”
Related
Vilas had also questioned why the umpires, David Millns and Graham Lloyd, had not checked exactly what had happened with the TV umpire. “They look for everything else,” he said. “Ultimately it’s their decision, and their decision is final. As players we know that and respect that so we just need to move on with it. It is what it is.”
Vilas’ view appeared to be shared by Daniel Gidney, the club’s chief executive. He retweeted a tweet from Jordan Clark, the ex-Lancashire allrounder who now plays for Surrey, saying: “Did lancs just run a legitimate 2 at the end there or was that just me? [sic]”
James Vince, Hampshire’s captain, suggested that the ball was “obviously” dead when McDermott had broken the stumps at the keeper’s end. “Dane came onto the field and was questioning the umpires,” he said. “I think he was trying to say that we had broken the bails when he [Hartley] was in and then they ran two.
“But, I mean, obviously they weren’t going to run two to the wicketkeeper so I’m not quite sure what he was trying to say. Once we broke the bails at the end and whatever, I just double-checked with the umpires that the game was done and dusted and they said, ‘yeah’, and then we celebrated for a second time.”
There was also controversy surrounding an apparent field change for the final ball, which was spotted by Saqib Mahmood, the injured Lancashire seamer who was covering the game as a pundit for the BBC. Ellis had inadvertently confirmed the change – “we put a [short] midwicket in,” he told Sky Sports – which should not have been permitted, since it was a free hit.

So much going on that last ball but still can’t get my head around how you don’t go to the third umpire to check the runout. Also I’m pretty sure the field for the free hit was not the same as the no ball, backward point moved to mid wicket, is that allowed?

Vince also believed that the umpires made an error on the final ball of the penultimate over of Hampshire’s innings, when the dressing room were convinced that Lancashire only had three fielders inside the 30-yard circle, rather than the required four – a decision which was not checked with the TV umpire.
“I felt like a few things went against us,” he said. “When they had three [fielders] inside the ring and they didn’t look back at it and give us the no-ball, that was a couple of extra runs there and in finals, often, the ones we’ve played in come down to one or two runs. It felt like they had the rub of the green a little bit, so it was extra special to get over the line in the end.”
This story was updated to include the MCC’s statement.
Tags: Dane Vilas, Hampshire, Hampshire vs Lancashire, James Vince, Lancashire, Nathan Ellis, Vitality Blast