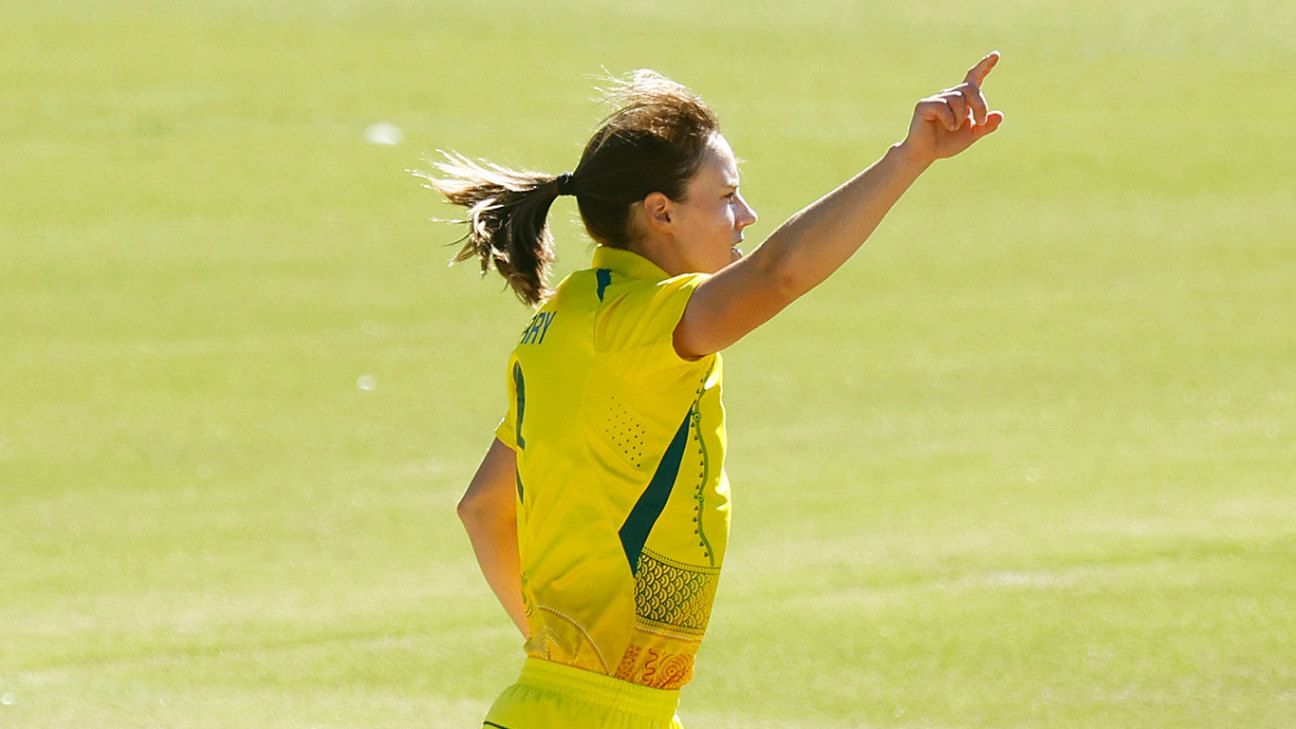 Ellyse Perry, who remains restricted to batting-only duties as she recovers from a stress fracture of her back, could struggle to force her way back into Australia’s T20I line-up for the Commonwealth Games.
Perry, whose batting strike rate has come under scrutiny, lost her spot in the format during the T20I leg of the Ashes earlier this year, one of the more significant calls former head coach Matthew Mott made during the latter part of his tenure. Though she may find some game-time during the tri-series in Ireland, as Australia manage their squad in the lead-up to Birmingham, there does not appear to be a vacancy for her in the first-choice side.
Tahlia McGrath’s magnificent return to international cricket has made her spot secure while the rest of the top six are locked in barring injury. Having Perry purely as a batter would also alter the balance of the side, albeit she had bowled less in her recent T20Is since returning from the severe hamstring injury picked up at the 2020 T20 World Cup.
Related
“It’s a slightly different role I guess for her for what she can normally play in our team,” captain Meg Lanning said following the team’s arrival in Ireland. “Think if she was to get an opportunity, she’s been in the middle order for us. We are pretty flexible with what that looks like, so any player within that can come in at any point. She would fit somewhere in there.
“There’s many players who could come in and play a role and she’s certainly one of those. Looks a bit different for her this tour, but I’m sure she’ll handle it well.”
Australia have had 12 T20Is since the last World Cup amid the disruption caused by the pandemic, but four of those have either been curtailed by rain or abandoned – including the last two in the Ashes – so Lanning sees the four games in Ireland (two against the hosts and two against Pakistan) as key to getting back up to speed after a period focused on the ODI format.
“It’s about trying to find our groove a little in the format, we haven’t played a lot of it over the last 12 months so an important period coming up,” she said. “Playing against Ireland and Pakistan, we don’t know a lot about Ireland, we haven’t played them for a little while, but it’s exciting to be able to come over here and play them. Pakistan are a dangerous team and have some really skillful players.”
Amanda-Jade Wellington is one option to fill in for Jess Jonassen•Getty Images
Lanning said they would monitor the workload of the quick bowlers while in Ireland – Darcie Brown is an especially valuable asset in that regard – and there is the focus of having players primed for the gold-medal push at the Commonwealth Games, but they won’t change the team for the sake of it.
“There’s no doubt we want to get some cricket into the squad…but we are certainly not going to change things [just] because we can,” she said. “So we’ll pick our strongest team that we can on each day, understanding that there will be some managing along the way as well.”
One selection decision they will have to make for their first couple of matches at least is who replaces Jess Jonassen after she tested positive for Covid before leaving Australia. It could mean an opportunity for allrounder Grace Harris, who bowls offspin, or for legspinner Amanda-Jade Wellington to get her first game in the format since 2018. However, there is also the chance it might not be spinner-for-spinner.
“We’ve got some really good all-round options as well in the pace department, so it comes down to what we feel will fit best,” Lanning said. “While it might look a little different to how we normally line up bowler-wise in a T20, think we’ve got some good options.
“It does give someone else an opportunity. JJ is a very important part of our team and bowls at all times throughout an innings. That’s something we’ve done really well over the last few years, someone else coming in and taking their chance.”
In terms of Covid, the team is trying to remain indoors in Ireland as much as possible to minimise the risk of infection.
“Things can pop up really quickly so we are just being really flexible and understanding of the situation,” Lanning said. “Hopefully that means that we can get through unscathed.”
Tags: Amanda-Jade Wellington, Australia Women, Ellyse Perry, Grace Harris, Ireland Tri-Nation Women's T20I Series, Jess Jonassen, Tahlia McGrath