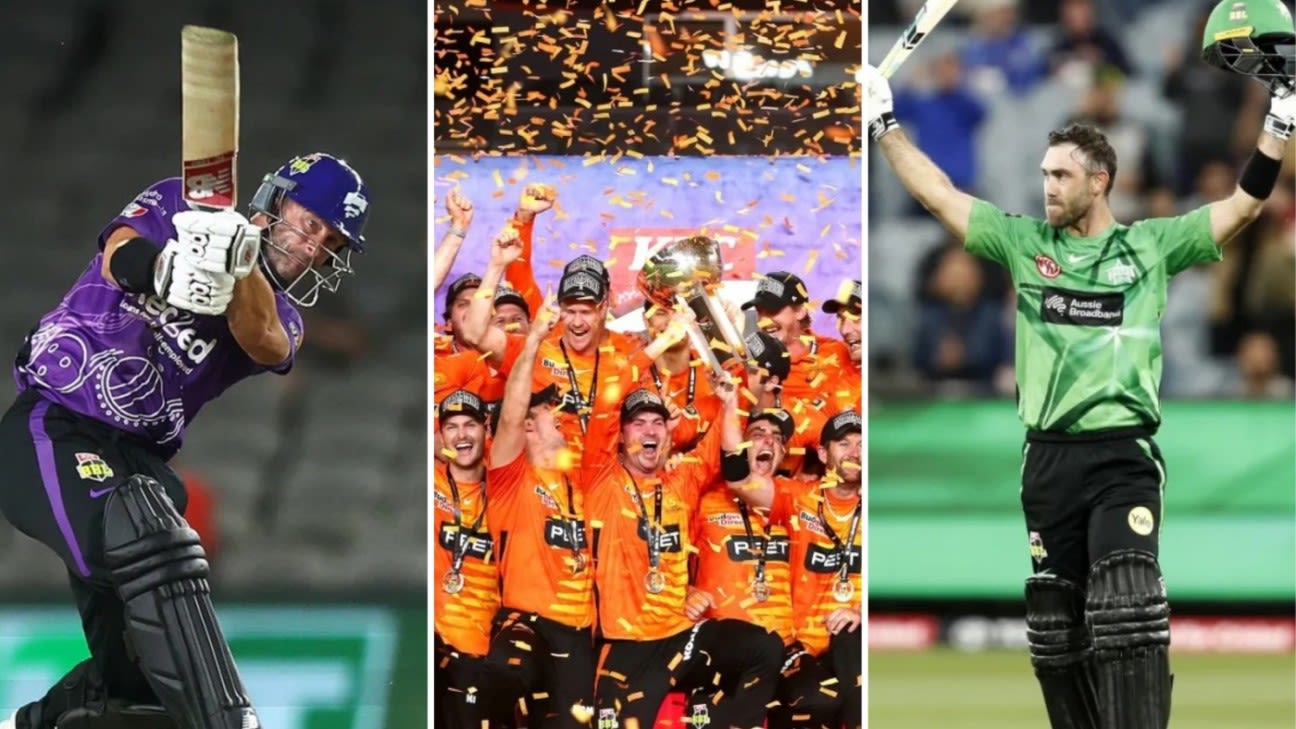 The BBL will once again stretch into early February as it faces a “critical” season to rebound from the disruption of Covid-19, which has seen it at the centre of the rights dispute with Seven, as Cricket Australia prioritises the return of crowds to stadiums.
Last season’s edition came to a conclusion across the Australia Day weekend at the end of January, but this time the final will be on February 4. This is largely the trade-off for the tournament starting later in December with the first game on the 13th of the month compared to December 5 last year.
“We’ve been clear since the end of last season given the disruption of two years that rebounding really strongly this season is such a critical thing for us to achieve,” Alistair Dobson, the general manager of Big Bash leagues, told ESPNcricinfo. “This season is one of if not the most important seasons we’ve had in recent years.”
“Right at the top of list was crowds and attendances at games. We are still learning broadly about what fans’ behaviours are in terms of getting back to big sporting events. We are watching the winter codes really closely and hearing from them about the opportunities and challenges.
Related
“We have certainly had one if not both eyes on how we can schedule a season that gives families, kids, and everyone who loves the BBL the chance to get back to the games. So that’s certainly been our key priority along with all the other things we keep in mind, particularly around our broadcasters and club workloads.”
The opening game, which sees Sydney Thunder play Melbourne Stars in Canberra, takes place the day after the completion of the Australia-West Indies Test series in Adelaide. CA has scheduled the opening Test of the season in Perth so, along with the traditional day-night match having also been completed, it means there will be no clashes between Tests and BBL. The cancellation of the South Africa ODI series has now also freed up January after the Sydney Test.
Australia’s tour to India is expected to start in early February but the league is confident that players will be available until the end of the finals series.
The likes of Glenn Maxwell should now be available for the whole competition after the South Africa ODI series was cancelled•Getty Images
“Starting after the day-night Test is the best place, that mid-December window is a bit more traditional, a bit closer to the school holidays,” Dobson said. “We do our best to schedule as many matches if not all of them inside the summer holiday window and we’ve been able to finish the regular season within that January period.
“Without any other day-night Tests in the window we have a clear run at primetime, then post the Sydney Test we have a great run of weekend and afternoon matches.”
Defending champions Perth Scorchers will get their campaign underway with a home match against Sydney Sixers at Optus Stadium in a re-run of the last two finals. Scorchers were only able to play one game at home last season due to Western Australia’s border restrictions. They then have a run of four home games out of five in late December and early January.

Sixers also have a run of home matches over the Christmas period with three consecutive games at the SCG from December 22 to December 28.
The two Melbourne derbies will take place on January 3 (MCG) and January 14 (Marvel) and the Sydney head-to-heads on January 8 (Showground Stadium) and January 21 (SCG).
Hobart Hurricanes will host their traditional Christmas Eve fixture, this year against Melbourne Renegades, which will be one of 12 afternoon games albeit three of them are in Perth so broadcast at primetime in the major east coast market.
There will be a double-header on Boxing Day (Sixers vs Stars and Scorchers vs Strikers) and New Year’s Day (Renegades vs Scorchers and Heat vs Sixers). The regular season comes to an end on January 25 with finals week beginning on January 27 with the Eliminator.
Matches will also be played at three new venues: Albury, Cairns and North Sydney Oval.
The tournament will have a draft for overseas players this season, which is likely to be held midway through August.
It is expected that the X-Factor and Bash Boost point playing conditions will be scrapped but the Power Surge – where two overs of the powerplay are taken after the 10th over – will remain.
There is also hope that DRS will be in place for the first time after Covid border restrictions halted attempts to introduce it in recent seasons although it remains a complex undertaking.
“It creates an incredible logistical challenge around having to move significant [DRS] kit from one day to the next with a couple of games a day,” Dobson said. “But we are into the final phase with them and we are confident we’ll be able to resolve any of those issues.”