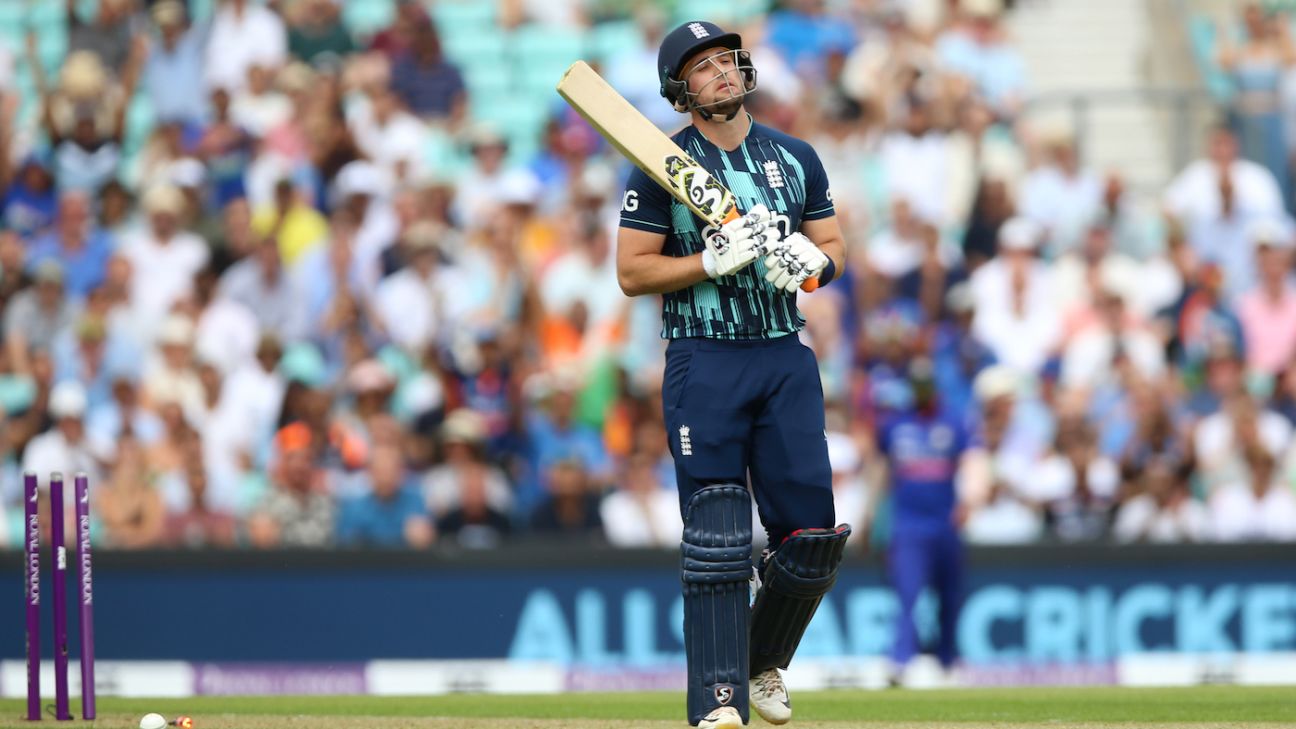 Happy anniversary, England! Yes, by the time the second ODI against India gets underway at Lord’s on Thursday, it will be three years to the day since the hosts’ crowning glory in the 2019 World Cup final. Three turbulent years, it has to be said, given the onset of the pandemic and the chaos that accompanied it; this time last year, in fact, a scratch team led by a half-fit Ben Stokes was putting the finishing touches to a 3-0 series win over Pakistan.
As omens would have it, it is traditional to be given a gift of “leather” to mark one’s third anniversary… a prospect that England might not be overly grateful for, if that gift is to be delivered once again at a 90mph velocity by the peerless Jasprit Bumrah.
For there have been few thumpings to match the one that India handed out to the world champions at The Oval on Tuesday; and such is Bumrah’s reputation that if England had to replay their performance in perpetuity – batting first in swinging conditions against a bowler at the peak of his powers – few would be mad enough to expect a different result.
Related
No prizes for guessing what Jos Buttler will be keen to do at Lord’s then, should he be fortunate enough to win the toss on what promises to be another sweltering day of cricket. Chasing down totals was a hallmark of Eoin Morgan’s class of 2019, and it has been the defining characteristic of the Test team’s Bazball revolution too.
Set them a number, and let them cut loose. It is nominally a new era with Buttler full time at the helm, but now doesn’t quite seem the moment to tinker with a proven formula.
1:25

Buttler: ‘No need to panic at all’

For India, it was all so contemptuously simple that it is hard to know quite what they learnt from the experience; Bumrah’s mastery, after all, isn’t exactly an unknown factor. Shreyas Iyer, handed a chance at No. 3 by Virat Kohli’s groin strain, didn’t even make it to the middle, while Shikhar Dhawan’s marked lack of fluency at the top of the run chase still couldn’t prevent him from contributing to his 18th century stand with Rohit Sharma – and, remarkably, their fourth in just six ODI partnerships at The Oval.
What is clear, however, after an ominously comprehensive series win in the T20Is – one in which their finest performance, from Suryakumar Yadav, came in a losing cause at Trent Bridge – is that India’s white-ball fortunes are on precisely the sort of upwards curve that world-beating teams expect to reach in the final months of any given World Cup cycle.
With the 20-over and the 50-over versions both looming large, England’s challenge is to prove they are not themselves falling off the other side of the graph.

Ducks are nothing new for Jason Roy – he began his ODI career with a first-baller back in 2015, and has now amassed 17 across 158 innings in the two white-ball formats, a tally exceeded among Englishmen by just two batters: Buttler and Eoin Morgan (both with 18). And the calibre of those colleagues rather confirms the extent to which Roy’s stat is a badge of honour – proof of his eternal willingness to go hard from the get-go, to risk embarrassment in search of the reward of quick runs.
Such are the reasons why Roy was arguably Morgan’s favourite team-mate, a player who epitomised more than any other the selflessness that his white-ball team needed to become world-beaters. This, however, is the start of a new epoch under Buttler and Matthew Mott, and notwithstanding his century in the Netherlands last month, Roy knows that with a wealth of white-ball talent bubbling up from the Lions squad, he is under pressure for his place like never before.
Prasidh Krishna has a chance to make the third seamer’s role his own ahead of a home World Cup•PA Photos/Getty Images
Bumrah is clearly the man to watch in India’s ranks – try taking your eyes off him when he gets the ball in his hands on Thursday. But there is arguably more to be learnt about Prasidh Krishna in the remainder of this series. He didn’t have a whole lot to do at The Oval, but did it pretty well regardless, holding his nerve as Moeen Ali attempted a counterattack, and belying his lanky frame to pick off a fine return catch to quash England’s remaining hope.
That was his eighth ODI appearance, but only his second overseas after the one against South Africa in Cape Town earlier this year. And after a four-for on debut against England in March 2021, already his stats are stacking up – 19 wickets at 17.21, and an economy rate of 4.86 speak of a bowler with both penetration and control – and at the age of 26, he has a chance to make the third seamer’s role his own ahead of a home World Cup in 15 months.

Why change a winning team? Victory by ten wickets and with 188 balls to spare suggests a side in reasonable working order. There is no news as yet on Kohli’s groin niggle, while Arshdeep Singh – who missed the same game with an abdominal strain – wasn’t exactly missed in the bowling ranks.
Many of the same names who put the hammer down in the T20Is are lined up in the middle order, awaiting their chance to lay another marker. However, should Kohli be fit to return, he is likely to replace one of Iyer and Suryakumar.
India (probable): 1 Rohit Sharma (capt), 2 Shikhar Dhawan, 3 Shreyas Iyer, 4 Suryakumar Yadav, 5 Rishabh Pant (wk), 6 Hardik Pandya, 7 Ravindra Jadeja, 8 Mohammed Shami, 9 Jasprit Bumrah, 10 Prasidh Krishna, 11 Yuzvendra Chahal
Why change a losing team? The reunion of England’s Fab Five fell resoundingly flat at The Oval, but few could argue that the incumbent top seven – up to and including Moeen – are not currently the first-choice picks for next year’s World Cup.
So that leaves the bowlers, and what could any of them prove while defending a target of 111? The reintroduction of Sam Curran, potentially in place of Craig Overton, would be one plausible tweak, given he is still being eased back to action after his back injury. But reboot and reload seems an equally fair bet, and hope for a few more handy pointers in the next two games.
England (probable): 1 Jason Roy, 2 Jonny Bairstow, 3 Joe Root, 4 Ben Stokes, 5 Jos Buttler (capt & wk), 6 Liam Livingstone, 7 Moeen Ali, 8 David Willey, 9 Craig Overton/Sam Curran, 10 Brydon Carse, 11 Reece Topley

Another scorcher is in prospect on Thursday – bright sunshine and temperatures pushing 27 degrees Celsius – and given that lateral movement at Lord’s invariably depends on cloud cover, the pitch is liable to be another hard, true road. Plus, with sunset not until after 9pm, the floodlights will not be a factor. Win toss and… chase? It is how these teams prefer to roll.

“We have lost a few games at the moment but that is good for us going forward, and closer to a World Cup, we will start winning. We want to win now but you don’t want to win all games. Sometimes you learn more from losing games.”

Moeen Ali puts a positive spin on England’s first-ODI hammering
“Personally, my plan is to just keep it simple. That is my mantra. You only have to think if the wickets are different. Otherwise, if you repeat the same things over and over again, chances of success are that much more.”