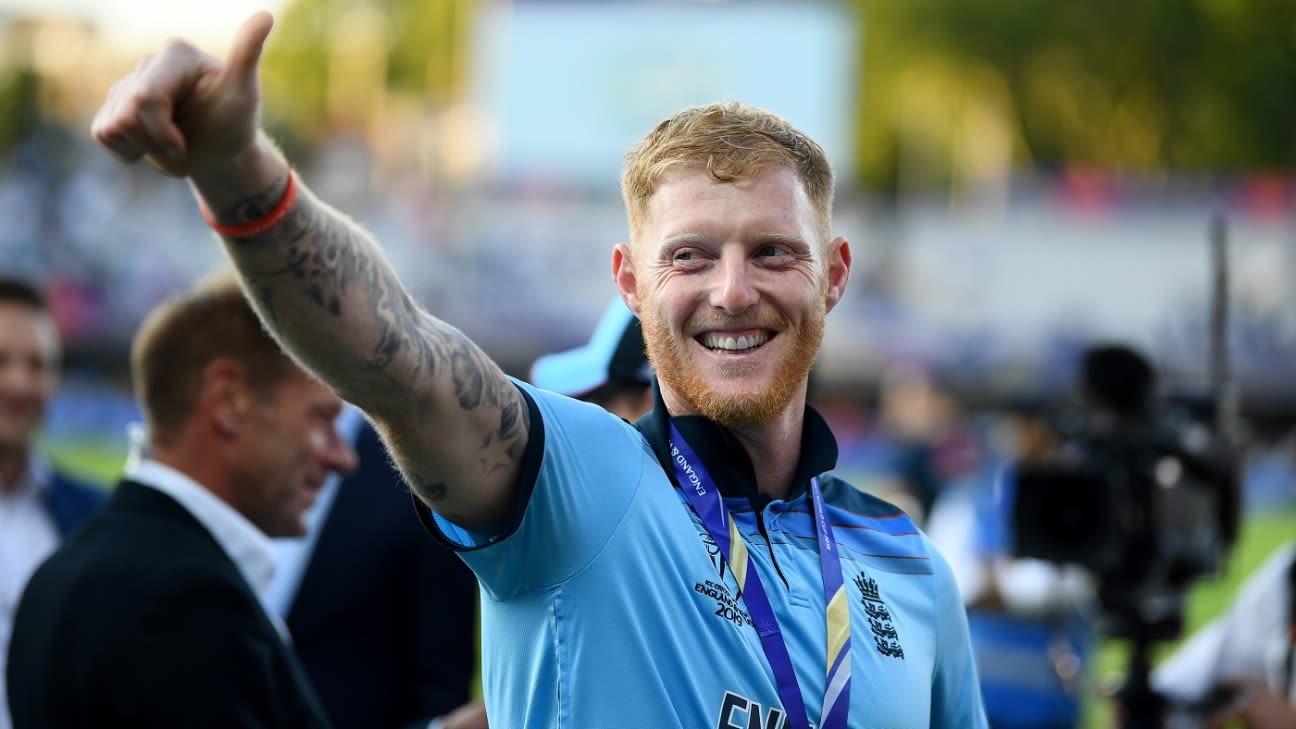 Ben Stokes has announced that he will retire from ODI cricket immediately after England play South Africa at Chester-le-Street on Tuesday.
Stokes was appointed as England’s Test captain earlier this year and said that playing three formats was “just unsustainable for me now” and that he felt as though he was blocking opportunities for other players.
He had been due to play all six of England’s ODIs this summer and rest throughout their T20I commitments against India and South Africa, as well as the Hundred, but has now opted to quit the 50-over game in order to give “everything I have to Test cricket” and “my total commitment to the T20 format”.
Tuesday’s ODI at his home ground, the Riverside, will be Stokes’ 105th game for England in the format, having made his debut against Ireland in 2011. He heads into his final appearance with a batting average of 39.44 at a strike rate of 95.26, and has taken 74 wickets. His defining performance in the format was his innings of 84 not out to force the 2019 World Cup final to a Super Over, in which he then added eight runs off three balls to help England lift the trophy for the first time.
Stokes said playing three formats was “unsustainable” in a statement•Getty Images
“I can’t give my team-mates 100% of myself in this format anymore,” Stokes said in a statement. “This has been an incredibly tough decision to make. I have loved every minute of playing with my mates for England. We have had an incredible journey on the way.
“As hard as a decision as this was to come to, it’s not as hard dealing with the fact I can’t give my teammates 100% of myself in this format anymore. The England shirt deserves nothing less from anyone who wears it.”
Stokes took a break from the game last summer to focus on his mental health and did not register for the IPL auction earlier this year in a bid to manage his workload across formats. He said in his statement that his body was “letting him down” due to the demands of the schedule and he was visibly hobbling after stooping to take a catch off Hardik Pandya in the third ODI at Old Trafford on Sunday.
England’s fixture list this summer involves seven Tests spread across three-and-a-half months, plus a dozen limited-overs internationals in the space of 25 days in July. Their schedule has been relentless since international cricket resumed in July 2020 after the initial hiatus during the first Covid-19 lockdown and will continue to place huge demands on players in coming years: a late draft of the 2023-27 Future Tours Programme, seen by ESPNcricinfo, includes 42 Tests, 44 ODIs and 52 T20Is outside of ICC events over a four-year period.
“Three formats are just unsustainable for me now,” he said. “Not only do I feel that my body is letting me down because of the schedule and what is expected of us, but I also feel that I am taking the place of another player who can give Jos and the rest of the team their all. It’s time for someone else to progress as a cricketer and make incredible memories like I have over the past 11 years.
“I will give everything I have to Test cricket, and now, with this decision, I feel I can also give my total commitment to the T20 format. I would like to wish Jos Buttler, Matthew Mott, the players and the support staff every success going forward. We have made great strides in white-ball cricket over the past seven years, and the future looks bright.
“I have loved all 104 games I have played so far, I’ve got one more, and it feels amazing to be playing my last game at my home ground in Durham. As always, the England fans have always been there for me and will continue to be there. You’re the best fans in the world. I hope we can win on Tuesday and set the series up nicely against South Africa.”
Related
Stokes is the second member of England’s World Cup-winning team to retire from ODI cricket in the last month, after Eoin Morgan quit the international game at the end of June after their series in the Netherlands, leaving Mott and Buttler a significant challenge to replace them ahead of their title defence in India next year.
Stokes scored 48 runs in three innings against India, batting at No. 4, and bowled only three overs across the three-match series, but leaves a major hole in England’s first-choice side. In the medium term, they may look to blood Sam Curran – who ran the drinks throughout the India series – as the closest thing to a like-for-like replacement.
Rob Key, the ECB’s managing director of men’s cricket, described Stokes’ decision as “typically selfless” and said that it would “benefit England long-term”. He said: “Ben Stokes has had an incredible international career in ODI cricket, culminating in his match-winning performance at the 2019 ICC Men’s Cricket World Cup final.
“I know this must have been a tough decision, but I completely understand why he has reached this conclusion. I’m sure that when we look back on Ben’s career and see this as one of the reasons he will play 120-plus Tests and help England in T20 matches and World Cups for many years to come.”
Clare Connor, the ECB’s interim chief executive, added: “Ben is not only one of the world’s best players, but an inspirational figure too so our ODI team will miss him. But having taken on the Test captaincy and with today’s busy calendar of cricket, we completely understand and respect his decision. We look forward to watching him excite and enthral in an England shirt for many years to come.”
Tags: Ben Stokes, England, England vs South Africa, South Africa in England