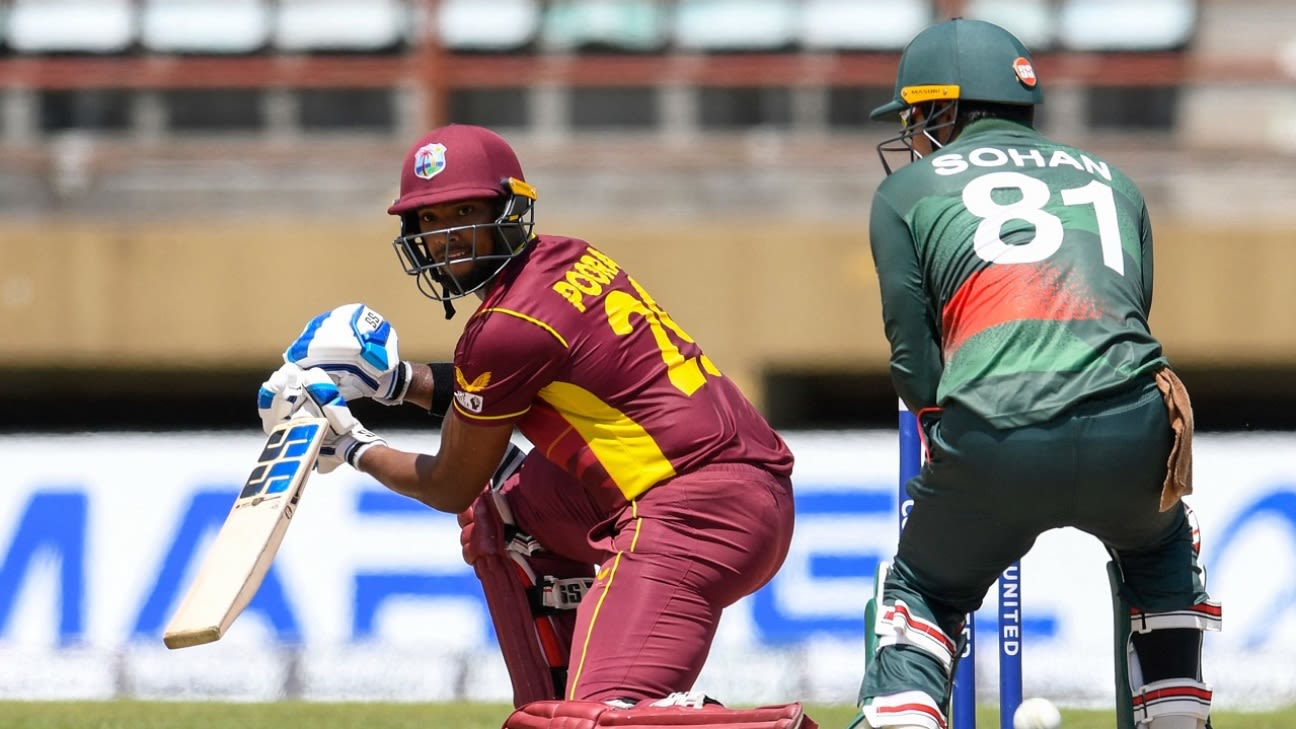 West Indies’ white-ball captain Nicholas Pooran has called for greater fight and game awareness from his players, irrespective of the conditions, after they were recently swept 3-0 by Bangladesh at the Providence.
“As a group we felt like in international cricket 9.30 [am] games, you can’t control certain things. For us I felt the biggest learning is believe that we can fight – doesn’t matter the conditions,” Pooran said on the eve of the ODI series opener against India.
“We need to assess as players really quickly and understand that if it’s difficult for us, it’s difficult for the opposition as well. For us as a batting group, we need to hang in there as long as possible in tough conditions and tough times and believe that whatever we got is respectable and gives us a chance in the game.
“That’s the most we can ask of ourselves. I think Guyana was challenging for us, but we still learnt a lot being there as a group, coming from Pakistan as well, then into the Bangladesh series…the results wasn’t in our favour, but as a new group this is our challenge.”
Related
The challenge will only get stiffer against India although the visitors are missing several of their frontline players, but Pooran embraced it and lauded his team for their willingness to learn from the errors made against Bangladesh.
“As I always tell the guys, no story ever starts well and it has started so for us in ODI cricket,” he said. “But I believe in the guys and believe in the talent that we have here and willingness of the guys to learn. Everyone wants to get better; everyone is asking questions. Everyone is asking how to get better and that’s something I admire from the guys so far coming from the Bangladesh series. We’re just looking forward to some things going our way because the guys have been putting in a lot of work and we’re looking forward to this India series to correct some rights and wrongs.”
The forthcoming series against India is not part of the Super League, and West Indies have lurched from one defeat to another in ODI cricket of late, but Pooran insisted that they aren’t lacking any motivation to turn things around.
2:14

Simmons: We need to win for the Caribbean people

“I think all the players are motivated and everyone wants to do well, which is really fantastic to see,” he said. “I don’t have to do too much to be honest. We just need to have really good conversation and believe in each other and continue to back our skills. I think the guys are gelling really well at the moment.”
Pooran echoed head coach Phil Simmons’ comments in saying West Indies’ first goal in ODI cricket is to find a way to bat out 50 overs. He also wanted to hold his judgement on the batters and see how they fare on a Port-of-Spain pitch that is likely to be conducive to run-scoring.
“Not only from my side but from a coaching side as well, our focus it to balance ODI cricket between T20 cricket and Test cricket,” Pooran said. “I think we haven’t found the right template yet and everyone can see that. We’re not batting 50 overs and that’s the first box we want to tick.
“At the moment, when you ask me what brand of cricket we want to play in ODI cricket it’s difficult to say yet. For example, if you want to play aggressive cricket, it’s difficult to play aggressive cricket in tough conditions. So, for us, it’s all about finding ways to bat 50 overs – it doesn’t matter how we bat 50 overs – but I believe conditions do play a part in how we play our cricket.
“For us, it’s ticking one box at a time and one step at a time. I believe that in T20 cricket we’re starting to know what kind of cricket we want to play; in Test cricket same thing, but the more games we play as an ODI unit I think we’re going to get better and a lot of the guys are going to have more games under their belt and they can have more experience and confidence as well. It will be nice if I can answer this question maybe after the New Zealand series, going by conditions and how guys react to certain situations as well.”
Hetmyer working on fitness
Batter Shimron Hetmyer has linked up with the West Indies squad in Port-of-Spain, but Pooran made it clear that he isn’t available for selection for the ODI series. He is currently working with the coaching staff on his fitness, having missed out on West Indies’ recent squads on those grounds. Hetmyer last played international cricket for West Indies in November 2021.
“Obviously, would love for him to be in this ODI series, but obviously he’s been doing a lot of work on his fitness and he has been putting in a lot of work,” Pooran said. “He wants to play for West Indies; the trainers and the coaches are working with him, so expect him to play sooner or later. I think he has a fitness test to pass shortly and so he’s preparing for that.”
Tags: India, India in West Indies, Nicholas Pooran, Shimron Hetmyer, West Indies, West Indies vs India