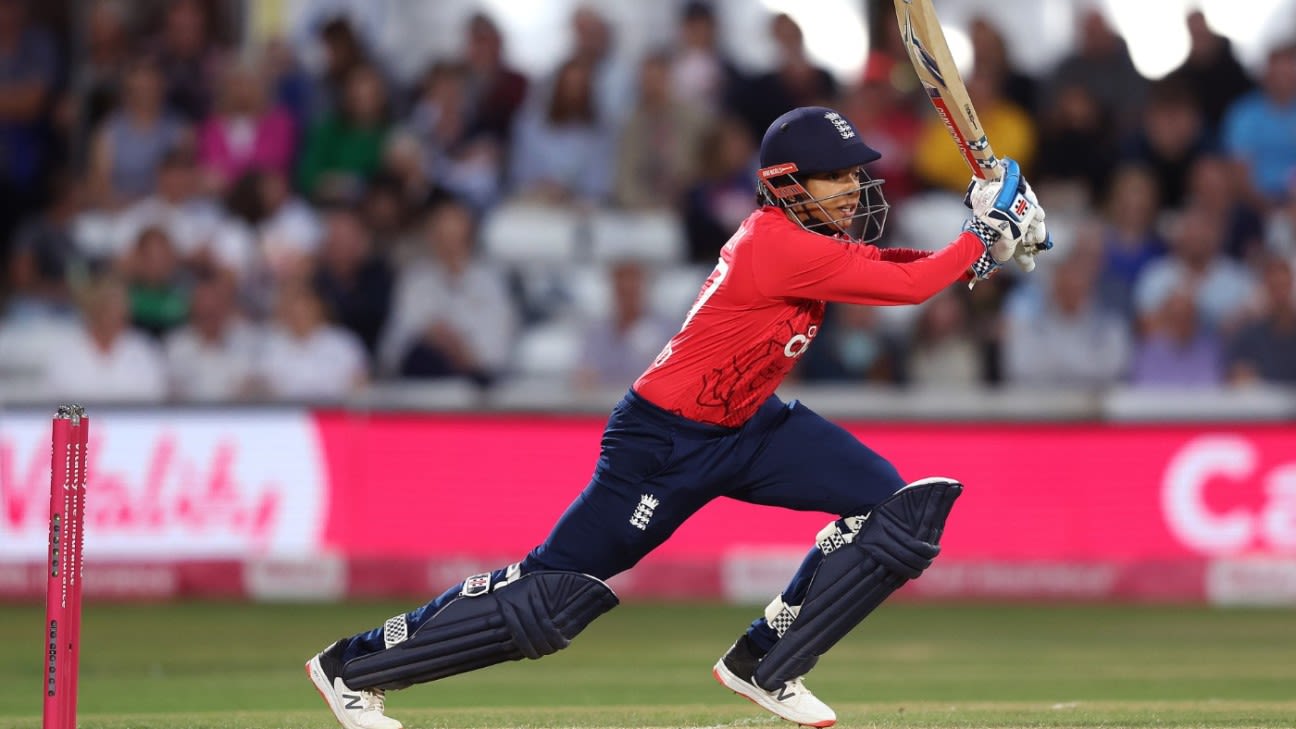 England 114 for 4 (Dunkley 59) beat South Africa 111 for 9 (Wolvaardt 55, Brunt 4-15) by six wickets
Career-best figures from Katherine Brunt and an exceptional first outing for Sophia Dunkley as opener propelled England to a resounding six-wicket win over South Africa with five overs to spare in the first T20I, and a multi-series triumph.
The result at Chelmsford, led by Brunt’s 4 for 15 and sealed by Dunkley’s 31-ball half-century handed England a 10-2 lead with two more T20Is remaining, each worth two points for the win.
Laura Wolvaardt scored a brave 55 off 49 balls for South Africa in one of the only things to go right for the visitors, who also lost star allrounder Marizanne Kapp for family reasons and bowler Tumi Sekhukhune to injury shortly before the match. Ayabonga Khaka’s 3 for 13 from four overs was another bright spot, but the damage had been done by Brunt and Dunkley.
Brunt’s back, baby
Not that she ever really went away… just for Test matches. Having announced her retirement from the longest format ahead of last month’s draw in Taunton, Brunt roared back with a vital 3 for 18 as England won the first ODI by five wickets. She sat out the next two but then, stepping up her preparations in earnest for the Commonwealth Games, the 37-year-old Brunt went out and took a career-best 4 for 15 to decimate South Africa and show just how up she is for the debut of women’s cricket at the event, starting in Birmingham next week.
Brunt struck with the fourth ball of the match to remove Lara Goodall with a length ball that came back off the seam to clatter into the top of off stump, having had a caught-behind decision overturned on the previous delivery. She then had Sune Luus out edging onto her stumps for her 100th T20I wicket. When she returned in the 18th over, Brunt accounted for Delmi Tucker who sent a simple catch to Dunkley at point, then Wolvaardt to an excellent diving take at deep midwicket by Nat Sciver, who ran out Masabata Klaas four balls later after she had flicked a Brunt delivery to the on-side but was short of her ground coming back for a second, as Sciver threw the ball in to keeper Amy Jones.
Katherine Brunt celebrates the wicket of Sune Luus•Getty Images
Legspinner Sarah Glenn returned to an England shirt for the first time since the T20I segment of the Ashes in January and took her first international wicket since the home series against New Zealand last September when she bowled Anneke Bosch, South Africa’s next-highest scorer behind Wolvaardt with 18. Left-arm spinner Sophie Ecclestone chimed in with two wickets and Sciver one.
Slam Dunk
A week ago, Dunkley spoke of her desire to cement a place in England’s top order, having just been promoted to No. 3 for their 3-0 sweep of the ODIs. Opening for the first time in a T20I, she produced the most positive of results for her side’s experiment with her aggressive style up top, smacking a 39-ball 59 to overhaul slightly more than half of England’s meagre target.
Dunkley closed out the powerplay at 50 for 2 after the early loss of Danni Wyatt and Bryony Smith – playing her fourth T20I but first in more than four years – with a brutal six over long-off from the bowling of Klaas, having heaved the same bowler a long way over deep midwicket in the second over. Another off Bosch over long-on completed her haul of sixes in an eye-catching innings that also included five fours. Dunkley eventually holed out to Khaka at deep midwicket off Bosch after an encouraging night’s work for the hosts.
South Africa lose two more – players that is
Since the drawn Test, very little has gone right for South Africa. Losing the subsequent three ODIs as well as three players, it cannot have been a happy camp heading into the first T20I. The abrupt retirement of explosive batter Lizelle Lee immediately after the Test amid considerable controversy, has now been followed by the departures of star allarounder Kapp and bowler Sekhukhune for family and injury reasons respectively.
Related
Both had played key roles in allowing South Africa to draw the rain-hit Test for their only points of the tour so far and as her team’s leading player in terms of form and experience, Kapp’s absence is another heavy blow, especially if, as expected, it extends to the Commonwealth Games. “Kapp has requested to travel back home to Gqeberha to be close to her family during this trying time,” CSA said in a statement.
Sekhukhune experienced a groin problem while warming up for last Monday’s third ODI in Leicester and, after consultation with team medical staff, it was agreed she would begin her rehabilitation at home. Top-order batter Tazmin Brits was called into the South Africa squad as a replacement.
Tags: England Women, Katherine Brunt, SA Women vs ENG Women, Sophia Dunkley, South Africa Women, South Africa Women in England