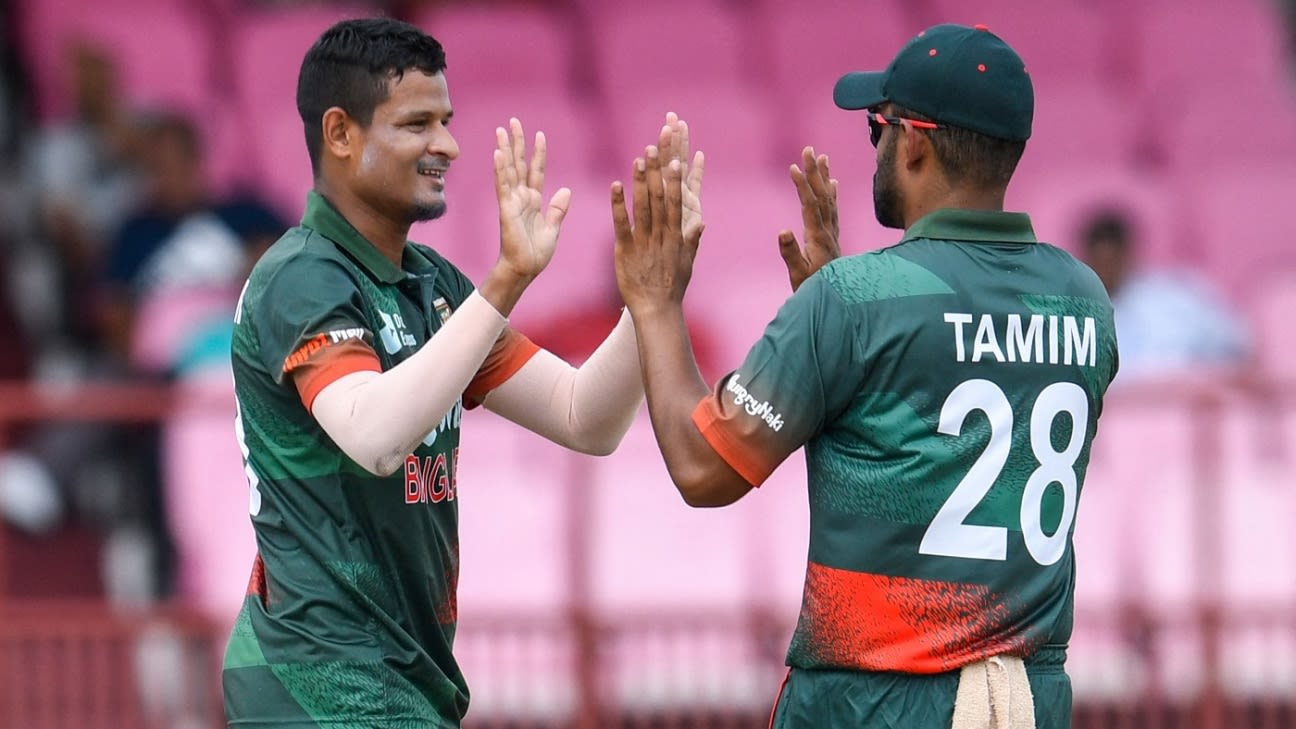 Bangladesh 112 for 1 (Tamim 50*) beat West Indies 108 (Mehidy 4-29, Nasum 3-19) by nine wickets
Bangladesh won the ODI series against West Indies, taking the second match with more than 29 overs to spare, bouncing back from losing the Test and T20I series.
They made West Indies bat first and bowled out the home side for 108 in 35 overs. Bangladesh took less than 21 overs to reach the target, for the loss of one wicket.
West Indies couldn’t handle spin again, as Nasum Ahmed took his first ODI wickets to start the West Indies collapse and Mehidy Hasan Miraz finished the rout with 4 for 29.
The home side rode some early luck when openers Kyle Mayers survived a messed-up stumping chance off Mehidy, and Shai Hope overturned an lbw decision to Nasum. But the batters didn’t last much longer.
Mayers was bowled by Mosaddek Hossain trying to defend on the front foot. Then Shamarh Brooks was bowled by Nasum for his first ODI wicket in his second match.
Mosaddek caught Hope who mishit an attempted slog sweep, and in the same over Nasum got captain Nicholas Pooran dragging on. West Indies were 45 for 4 and Nasum had 3 for 9 from six overs, three of them maidens.
Mosaddek bowled out his 10 overs by the 25th over. He had 1 for 37, but the pressure he and Nasum built led to West Indies taking more frustrated swings.
Rovman Powell was out for 13 trying to flick medium-pacer Shoriful Islam, and Brandon King charged and missed Mehidy to be bowled on 11. Akeal Hosein was too slow coming from the non-striker’s end and run out on 2 and West Indies was 72 for 7.
Nasum was brought back for his last two overs and finished with 3 for 19 off 10, earning the player of the match.
Romario Shepherd was bowled by Mehidy on 4 and Alzarri Joseph edged Mehidy behind and West Indies was 86 for 9. Mehidy claimed Gudakesh Motie to leave Keemo Paul stranded on 25 not out.
Motie got the wicket of Najmul Hossain Shanto but fellow opener Tamim Iqbal and Liton Das made no drama of the chase. Tamim finished the game with his seventh boundary to be 50 not out off 62 balls for his 53rd ODI fifty.
The visitors have won the two ODIs by six and nine wickets for a fifth successive bilateral series win. The last ODI and tour match is on Saturday at the same Providence Stadium and Bangladesh will be favored to beat West Indies an 11th straight time since late 2018.
Tags: Bangladesh, Bangladesh tour of West Indies, Mehidy Hasan Miraz, Nasum Ahmed, Tamim Iqbal, West Indies, West Indies vs Bangladesh, World Cup Super League