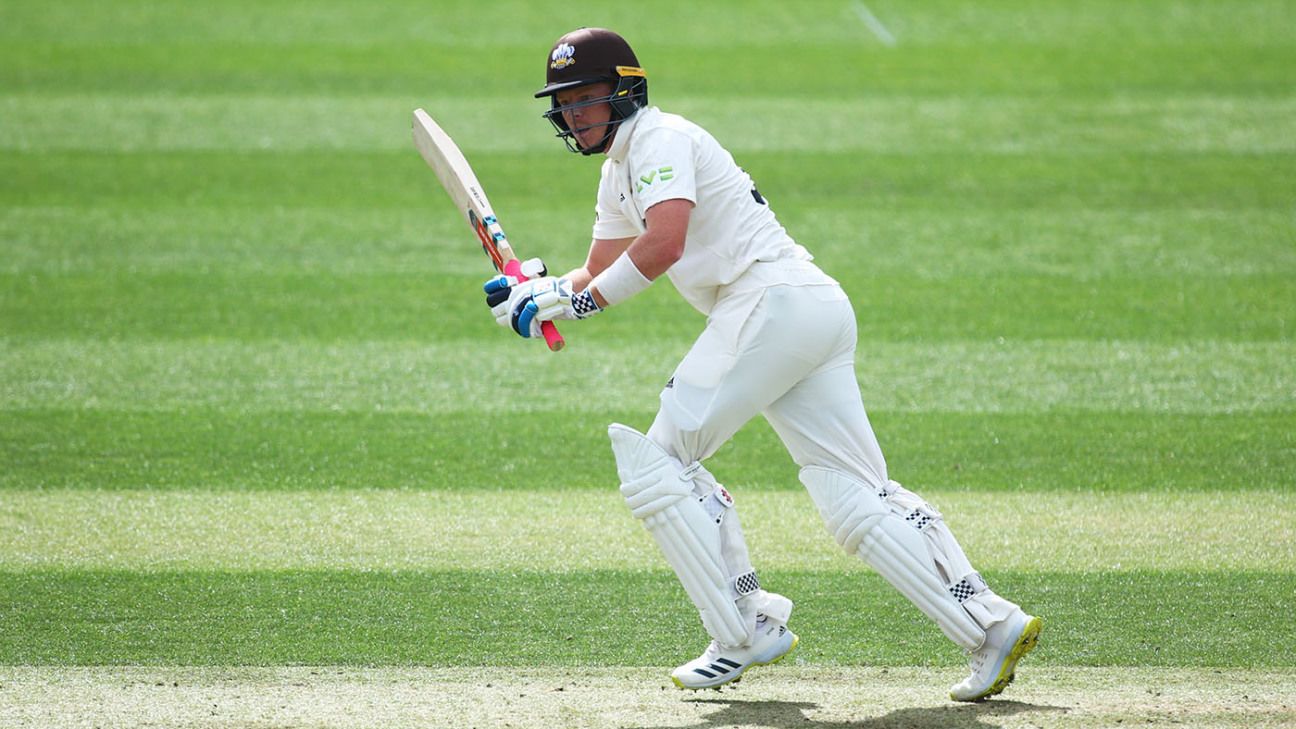 Warwickshire 253 (McAndrew 44, Sibley 43, Lawes 3-38, McKerr 3-39) and 1 for 0 trail Surrey 316 (Pope 65) by 62 runs
Ollie Pope’s sparkling 65, and a determined ninth-wicket stand of 72 between Conor McKerr and Jamie Overton, edged Surrey ahead of Warwickshire at the midway point of a hard-fought LV= Insurance County Championship contest at the Kia Oval.
Pope, who faced only 73 balls and hit two sixes and nine fours, scored the only half-century of the match so far, while McKerr and Overton’s heroics enabled Surrey to reply with 316 to Warwickshire’s 253. In two overs’ batting before stumps, Warwickshire reached 1 without loss in their second innings, reducing their overall deficit to 62.
Fast bowler McKerr, called up only as a late replacement for Dan Worrall, who suffered a shoulder injury in the warm-ups before the game, scored an assured career-best 37 in two hours’ resistance.
And Overton, batting down at No.10 because of a damaged right hand, contributed an equally responsible 38 to earn Division One leaders Surrey a precious third batting bonus point as well as a handy first-innings lead.
Just after McKerr’s dismissal, lbw on the back foot to slow left-armer Danny Briggs, and before he was last out, pulling Ollie Hannon-Dalby to deep mid wicket, Overton was struck a painful blow on the same hand by Liam Norwell but, after on-field treatment, he batted bravely on. Hannon-Dalby finished with 3 for 44, taking his season’s championship wicket-tally to 46.
In contrast to Warwickshire’s first innings, Surrey’s reply was always more aggressive in intent with Ryan Patel setting the tone almost immediately by taking three successive fours off Norwell’s opening over.
Two magnificent extra cover driven boundaries were followed by another four to square leg but then, from the very next ball, Patel’s attempt to hit a near long hop through square cover was undone when the ball hit the toe-end of his bat and looped up almost comically to Nathan McAndrew at cover, who ran in to take the easiest of catches.
Patel departed in understandably high dudgeon and when Hashim Amla was leg-before to the probing Hannon-Dalby for 9 in the ninth over Surrey were in early bother at 25 for 2.
Opener Rory Burns’ reaction, now in partnership with Pope, was to counter-attack and the pair had added 47 in six overs when, shortly before lunch, Burns was adjudged lbw to McAndrew for 27.
Pope, who had shuffled down the pitch to drive his very first ball, from Hannon-Dalby, deliciously wide of mid-on for four, and had also in the morning session swivelled in his crease to club a shortish ball from Brad Wheal high over square leg for six, was now joined by Ben Foakes in a stand of 55 in 15 overs that continued to take the attack to Warwickshire.
Hannon-Dalby, though, impressed in a lengthy spell from the Vauxhall End and, in his 13th over and the 30th of the innings, his perseverance paid off when an off-cutter pinned Foakes plumb lbw for a well-made 31.
Will Jacks was away quickly with a flicked four to long leg against Hannon-Dalby and Pope went to the game’s first half-century with a superb square driven four off Norwell. Jacks then whipped Will Rhodes’ medium pace twice wide of mid on for further boundaries.
Pope, however, had just pulled Wheal for six when, attempting to repeat the stroke next ball, skied for Alex Davies to take the catch running in from deep square leg.
He and Jacks had added 46 in eight overs and another 39 in seven came from Jacks’ subsequent alliance with Jordan Clark, who offered some thumping strokes of his own until McAndrew bowled him for 28 with an excellent ball that removed off stump.
By then Jacks had also gone, for a bright 51-ball 44, caught behind off McAndrew, but Surrey’s middle order had scored 164 in 36 afternoon overs and, after tea, the tail added another 73 thanks largely to McKerr and Overton.
Tom Lawes, caught at second slip off Norwell for 12, had enjoyed a remarkable escape just before the interval when he was beaten by a ball from McAndrew which clipped the outside of the off stump so hard that it deflected away past diving keeper Michael Burgess for four byes. The bails, though, did not budge!
Day two had begun with Warwickshire, on 240 for 8 overnight, losing their last two wickets for the addition of only 13 runs. McAndrew, who resumed on 40, at least made sure of a third batting bonus point before he sparred at a ball from Kemar Roach, berating himself for edging a catch to Pope at second slip.
And Lawes, replacing Roach, struck with his fourth ball to bowl Norwell with a perfect inswinger that plucked out middle stump. It gave Lawes figures of 3 for 38 from 20.4 overs, and the teenager was the pick of Surrey’s attack throughout the innings in just his fifth first-class appearance.
Tags: County Championship Division One, Ollie Pope, Surrey, Warwickshire, Warwickshire vs Surrey