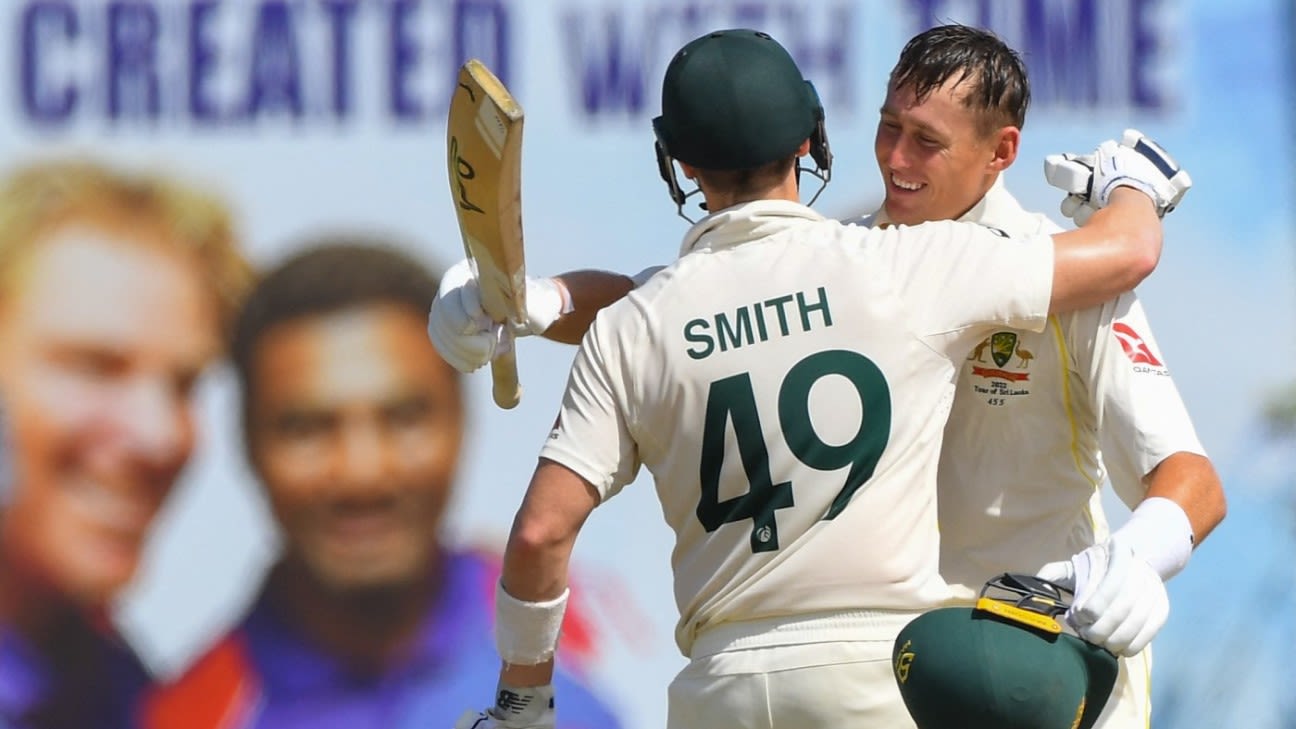 Stumps Australia 298 for 5 (Smith 109*, Labuschagne 104, Jayasuriya 3-90) vs Sri Lanka
Significant centuries, but for different reasons, from Marnus Labuschagne and Steven Smith gave Australia control on the opening day of the second Test in Galle. Labuschagne made his first Test hundred overseas and Smith just his second in 32 innings overall, going back to 2019, to form the centrepieces of a measured display by their team.
On a surface that started much truer than the one used for the opening Test – but still offered help for the spinners with more likely later on – life was easier for the batters. But the first innings remains the time to score the runs. Labuschagne and Smith added 134 in 37 overs, dominating the second session, before Sri Lanka fought back somewhat through debutant left-arm spinner Prabath Jayasuriya, one of three new caps handed out by the home side.
Labuschagne made Sri Lanka pay for giving him a life on 28, when Niroshan Dickwella fluffed a stumping chance which would have left Australia three down before lunch. Instead, he went on to reach his seventh Test century from 147 balls, the second fifty taking 63 deliveries, before he was lured out of his crease by Jayasuriya on the stroke of tea – this time Dickwella completed the dismissal, 76 runs later.
Except for his reprieve, it was a beautifully compiled hundred from Labuschagne. After a quiet resumption following lunch, where six overs brought just ten runs including the first maiden by a Sri Lanka spinner in the series, from Ramesh Mendis, Labuschagne got himself going again with a strong pull off Kasun Rajitha, which brought up his fifty from 84 balls.
Marnus Labuschagne scored his first Test century away from home•AFP
Then, in the next over from Ramesh, he collected consecutive boundaries. He had a moment of fortune when a bottom-edged sweep against Jayasuriya went mighty close to off stump, but he followed it with a perfectly timed punchy drive. Good footwork, as he came down the pitch to Jayasuriya to reach the ball on the full, brought him his 12th boundary to get to 99.
Until now, his 11 overseas Tests had brought five half-centuries – four of them in a row during his memorable performance during the 2019 Ashes in England – so ticking it off was an important milestone, especially to do so in Asia with the tour of India next year.
Smith’s century, his 28th in Tests, was just his second since the end of his remarkable 2019 Ashes and his first for 16 innings. It came late in the day against the second new ball, when he sent Rajitha through the off side with a commanding cover drive. There was a big smile, and perhaps a hint of relief in the celebration.
He had attracted criticism for his angry reaction to being run out in the opening Test and on occasions over the last couple of years has not appeared settled at the crease. But here Smith was in control throughout with his crisp footwork. A brace of full tosses from Ramesh helped him towards his fifty, but some of his best strokes came when he put Jayasuriya through the leg side – playing against the turn, but with strong wrists and superb placement.
Sri Lanka did well to stay in touch either side of tea as they managed to bring some control to Australia’s scoring rate after breaking the third-wicket stand. They had started the day nicely when Rajitha, one of four changes to the Sri Lanka side, produced a testing six-over opening spell and found a bit of assistance with the new ball. In a fashion that has become familiar over the last few years, he removed David Warner from around the wicket when a good-length delivery nipped away sharply and clattered the stumps.
Steven Smith scored his first Test century since January 2021•AFP
Usman Khawaja had been very secure, picking up from where he left off in the first match, making an early statement when he crunched Ramesh through mid-on, before receiving a brute of a delivery that spun to beat his edge and take the top of off stump.
It would be more than two hours before Sri Lanka struck again, with Jayasuriya showing impressive character on debut after a difficult start, which had seen him concede nine boundaries in 12 overs before taking Labuschagne’s wicket. He was able to add to his tally Travis Head, whose struggles on the road continued when a delivery slipped past the edge to clip off stump. Then he claimed Cameron Green with a borderline lbw, the batter missing a sweep. Green had been given a life when Dickwella missed another stumping.
Jayasuriya’s day could be split into two parts: 12-0-54-0 and 16-2-36-3.
Smith, though, remained solid through to the close with Alex Carey for company. Australia had resisted changing the balance of their side by recalling Glenn Maxwell at No. 8. Whether he would have added more value than Mitchell Starc will become clear in the next couple of days, but Australia are well placed to push for 2-0.
Sri Lanka, meanwhile, introduced three debutants – Kamindu Mendis, Maheesh Theekshana and Jayasuriya – following the Covid-19 outbreak in the squad.
Tags: Australia, Australia in Sri Lanka, ICC World Test Championship, Marnus Labuschagne, Prabath Jayasuriya, Sri Lanka, Sri Lanka vs Australia, Steven Smith