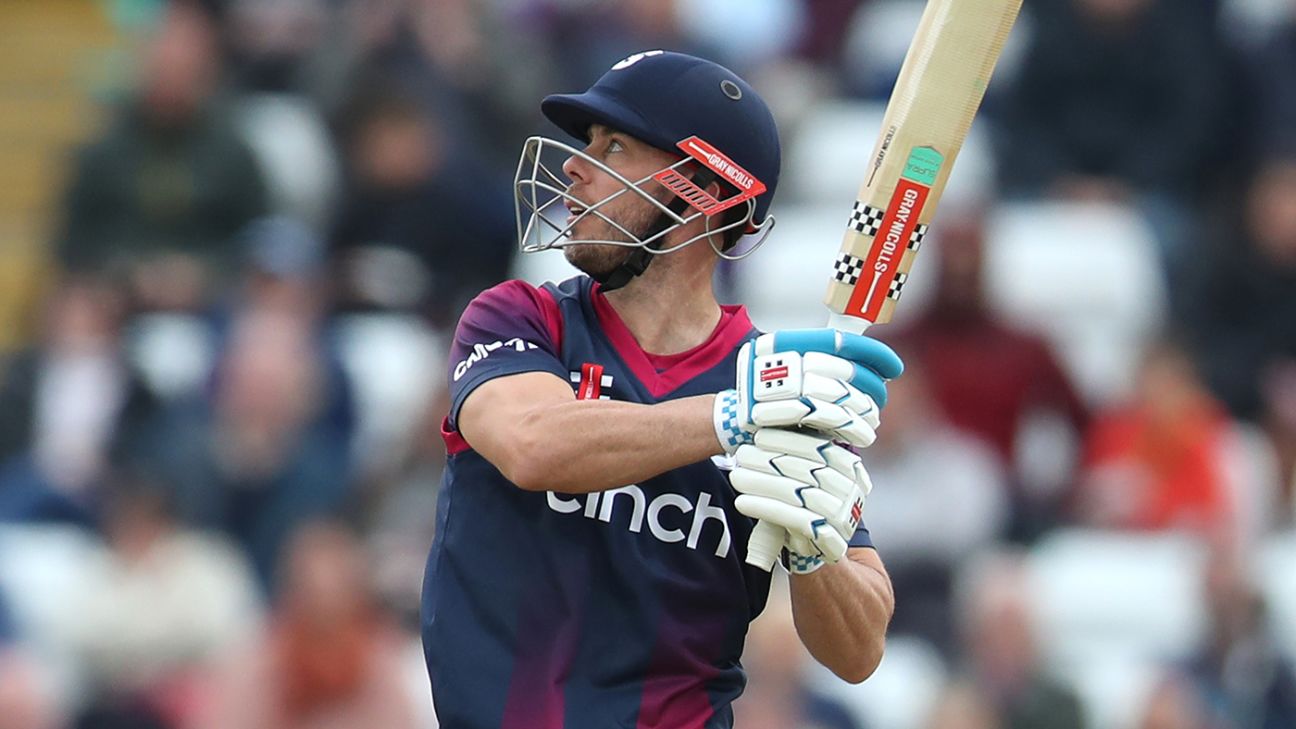 Northamptonshire 158 for 6 (Lynn 61, Tye 3-28) beat Durham 154 for 8 (Clark 44, White 3-14) by four wickets
A fine knock of 61 from Chris Lynn guided Northamptonshire Steelbacks to a four-wicket win over Durham in their Vitality Blast clash at Seat Unique Riverside.
The Steelbacks spinners Graeme White and Josh Cobb combined for 5 for 38 from their eight overs, limiting Durham to 154 for 8 in their innings, with White sending down a miserly spell of 3 for 14. Graham Clark top scored for the hosts, but their total appeared to be under-par and was proven to be the case as Lynn took command of the contest.
The Australian set the tone from the off for the visitors and his innings of 61 from 47 balls provided a platform for the rest of the line-up to bat around. There was late drama amid a fine spell of bowling from Andrew Tye, who claimed 3 for 28, but the Steelbacks held their composure to get over the line with three balls to spare to register their third win of the campaign.
Durham opted to bat first on a used pitch in gloomy conditions at Chester-le-Street, and although Michael Jones found the boundary with his second ball, he was bowled through the gate by Cobb. James Neesham found Ollie Robinson’s outside edge for five to put the pressure well and truly on the hosts in the powerplay. The home side mustered only 41 runs from their first six overs, but Clark and David Bedingham gradually found their way on a slow wicket.
Related
They combined for a stand of 41 before Bedingham was run out for a run-a-ball 20 at non-striker’s end by Freddie Heldreich, deflecting the ball onto the stumps off his own bowling. Clark struck six boundaries in his innings of 44, but he fell for a return catch from Cobb. Graeme White then turned the screw with a double-wicket maiden, bowling Paul Coughlin for 15 and then removing Brydon Carse caught and bowled for a duck, leaving the hosts 92 for 6.
Durham counterattacked towards the end of the innings as Ned Eckersley and Liam Trevasksis scored 19 apiece, propelling the hosts to a score of 154 for 5 after taking Ben Sanderson’s final over for 16.
Lynn made his intent clear from the third ball of the Steelbacks’ innings, advancing on Coughlin before dispatching a brilliant strike over cover for a maximum. Tye’s introduction into the attack brought about the dismissal of Ben Curran for 16 from 11, but Lynn and Cobb kept the scoreboard moving, guiding the visitors to 49 for 1 at the end of the powerplay.
Tye pegged back the Steelbacks by removing Cobb, but Lynn ensured that his team was ahead of the rate, scoring timely boundaries. The Aussie reached his fifty from 42 balls and continued his assault, launching Ben Raine over the long-on boundary. Lynn lined up Scott Borthwick for the same treatment, but missed a straight one to lose his middle stump for 61.
Late wickets almost brought Durham back into the contest as Tye bowled a brilliant penultimate over to Neesham, but a costly drop from substitute fielder George Drissell let the visitors off the hook. Tom Taylor secured the win for the Steeelbacks with a scoop off Raine to guide his team to a vital win on the road.
Tags: Andrew Tye, Chris Lynn, Durham, Durham vs Northants, Graeme White, Graham Clark, Josh Cobb, Northamptonshire, Vitality Blast