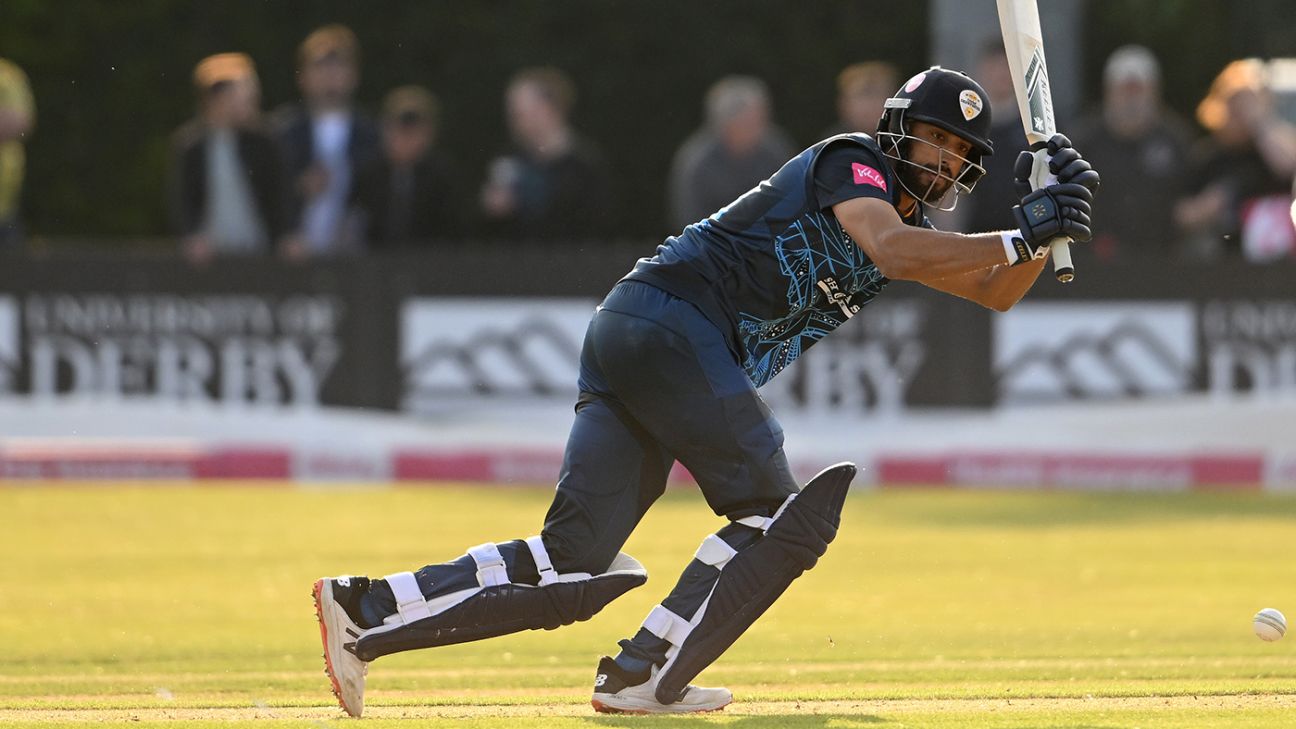 Derbyshire 182 for 4 (Masood 73) beat Leicestershire 181 for 6 (Lilley 67) by six wickets
“To fail, then get up and get going again is something I am used to,” said Shan Masood to Pakpassion.net as he arrived in county cricket this season. It was hard to resist the thought that such attributes were the perfect qualification for joining Derbyshire who get knocked down more than most. But what a season he has had, second to Ben Compton in the Championship runs list and continuing his rich vein of form in the Blast as he hopes to stir Pakistan’s interest ahead of their Test series against England this winter.
Masood’s elegant 73 from 32 balls set up an eventual victory for Derbyshire by six wickets with nine balls to spare and prevented Leicestershire from moving into the top four. He is relishing a settled summer in England, highly valued in all formats, and his innings was a joy as he drove and cut with rapier-like precision on both sides of the wicket. He has not always played with such freedom and, at 32, appears to have found a more natural approach.
According to Masood, his arrival at Derbyshire had an element of chance about it as he just happened to bump into Mickey Arthur in transit at Dubai airport: Masood heading back to Pakistan, Arthur on his way to Sri Lanka. As many as 86 million people transited through Dubai in 2019, and even though the Covid-19 pandemic reduced that number by two-thirds two years later, it was quite a coincidence. One could imagine Arthur lurking behind the display of Tag Heuer watches, a sort of human fly trap, until a potential signing wandered by.
Masood’s best night of the Blast so far was cheering news in Derby, where the football club is in administration and a potential buyer, the American businessman Chris Kirchner, has been given a Friday deadline to complete his £20m takeover. He was reportedly playing golf on Tuesday, when much of Derby awaited news whether he had handed over the money, but no sightings of him were reported at the County Ground two days later as Derbyshire chased down Leicestershire’s par score of 181 for 6.
Such scores feel quite commonplace these days, but David Griffin, Derbyshire’s voracious statistician and photographer, revealed that only once, in 2014 against Warwickshire, have they pulled off a higher successful run chase at Derby in T20 cricket.
The outcome was as good as settled by one of the shots of the night when Alex Hughes reverse-swept the left-arm spinner, Callum Parkinson, over fine leg for six, leaving Derbyshire only 20 short with 14 balls left. It was particularly impressive composure from Hughes, considering that he had almost been run out the ball before as Leicestershire’s captain, Colin Ackerman, demolished all three stumps in his attempt, all of this observed in bemused fashion by the wicketkeeper, Lewis Hill, silent, with hands on hips.
Twenty-four hours after the feverish excitement of the Roses match, this was a Midlands derby that advocates of city cricket regularly disparage. Derbyshire v Leicestershire at Derby is about as low-key as the Blast gets, fought out between two sides who have long become inured to the fact that their existence is constantly under question.
It is worth remarking, however, to those who recoil at the understated atmosphere of the smaller Midlands grounds on a chill and overcast night – the gentle hum of the sole burger bar, the chatter of spectators stood in little groups, tucking warm pints into their armpits (more solitary beer bugs than beer snakes), and the occasional burst of token music that is resolutely ignored – that both these sides have already beaten Yorkshire at Headingley this season. In the Blast, the mighty are fallen on a regular basis.
Pit Derbyshire and Leicestershire together, though, and both sides know their place, both of them thinking “this is a must-win game”. Derbyshire thumped Leicestershire at the Uptonsteel ground earlier in the campaign, dismissing them for only 89, and if they follow up this win with a fourth victory of the season against the bottom club, Worcestershire, on Friday it will transform their league position. Arthur appears to be drawing every ounce of nous from them.
Leicestershire were well placed at 114 for 1 when Hamish Rutherford drove Mark Watt, the Scotland left-arm spinner, to extra cover at the start of the 13th over – his 35 representing his highest score for the Foxes. Arron Lilley, carving around him for 67 from 41 balls, maintained the momentum but George Scrimshaw removed Lilley and Ben Mike with successive short balls and Leicestershire never quite produced the finale they wanted. When Hughes had Rishi Patel lbw, he passed Matt Critchley (now at Essex) as Derbyshire’s leading T20 wicket taker.
Derbyshire have had many quirky players in their history. Watt’s contribution to this hall of fame is to deliver occasionally from 24 yards – which has been known to catch out his captain Masood as he adjusts the field and presumably has occasionally entrapped a batter as well. He tried it at least twice last night and landed it with aplomb. He also bowled a couple of no balls, pivoting outside the side crease, by way of further variety, but they passed unnoticed by an umpire who was probably equally befuddled.
Masood’s immediate impact at Derbyshire bears comparison with any overseas player in their history – the likes of Dean Jones, Peter Kirsten and Daryl Cullinan. His dismissive approach against the Afghanistan quick, Naveen-ul-Haq, was a crucial element of his innings as he took 27 from 10 deliveries, his timing and placement impeccable as he scored square of the wicket on both sides. He eventually fell miscuing a pull against Mike, and even though Wayne Madsen was run out at the keeper’s end when he failed to take a second to Mike’s throw from mid-on, Luis Reece’s anchor innings was followed up by a cameo from Brooke Guest to secure victory.
Tags: Arron Lilley, Derbyshire, Leicestershire, Leics vs Derbyshire, Shan Masood, Vitality Blast